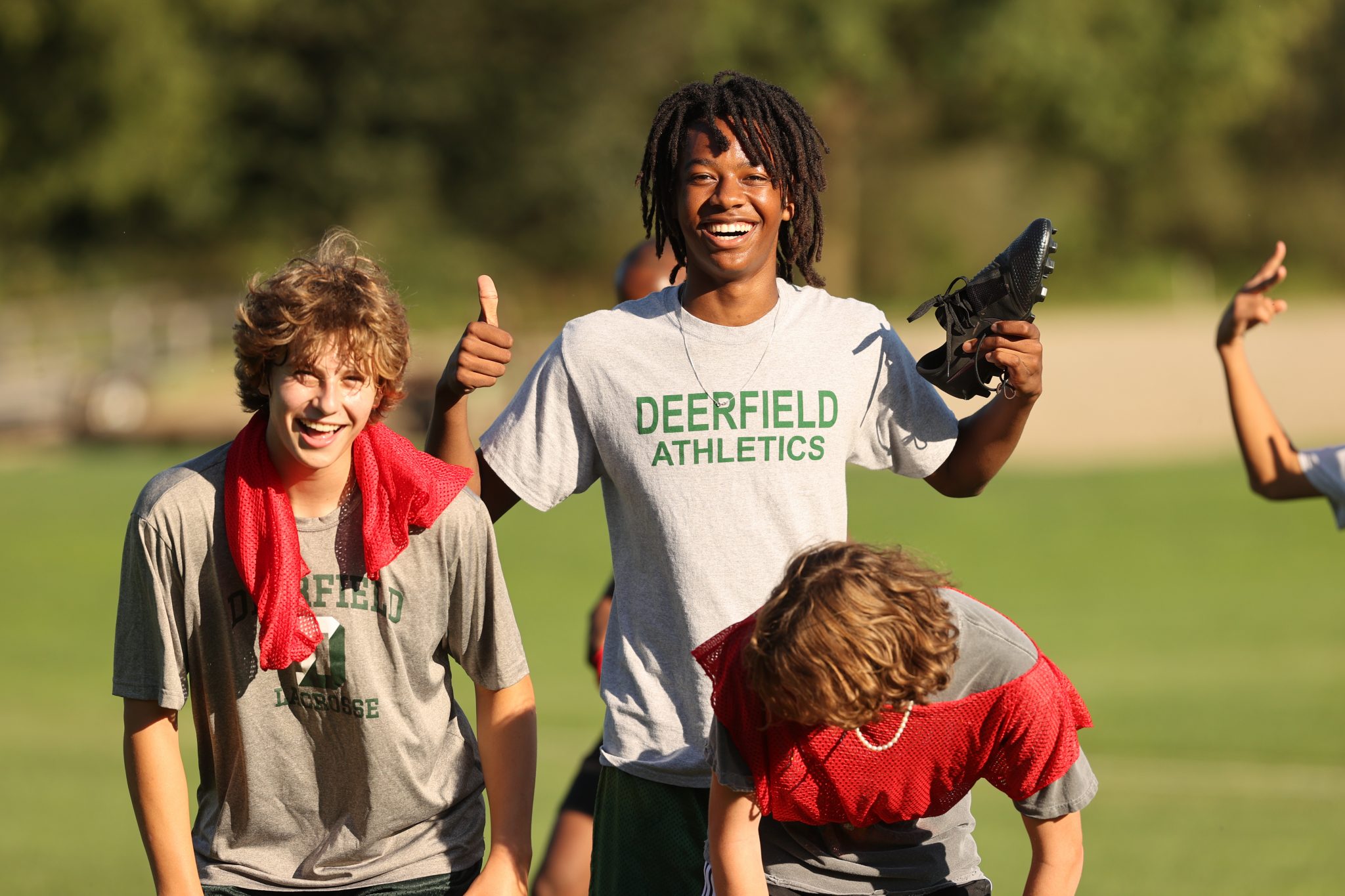 Several Deerfield teams kicked-off their regular season games this past week! It was exciting for our teams to return to action against fellow NEPSAC schools. The sun was shining and fans lined the fields in the support of the Big Green! Learn more about each team’s week below.

Varsity Volleyball:
On Saturday, the varsity volleyball team traveled to Farmington, CT for matches against Miss Porter’s School and Milton Academy. Deerfield was able to come away with two victories, both by scores of 2-0.
We did a nice job with our serving and all Deerfield players saw meaningful court time. Particular shout-outs to Caroline Weller ‘23 and Aoife Bruce ‘22 for their extended service runs in the first set against Milton and to Meghan Holland ‘23 for her setting throughout both matches.
We’ll look to continue the positive teamwork on Wednesday as we have our first home match of the season against Worcester Academy. First serve is scheduled for 4:30 pm.

Girls Varsity Soccer:
The Deerfield Girls Varsity Soccer team hosted a talented Milton team on a beautiful Saturday fall afternoon, their first home game since the fall of 2019. After a tough 3-0 defeat on Wednesday, the girls came into Saturday’s game with something to prove and it showed from the first whistle.
Solid team defense was on display throughout the game which generated a couple of excellent opportunities for DA to find a goal in transition only to be denied by some excellent saves by the Milton keeper. With the score tied at 0-0 and less than two minutes to play, ninth grade goalie Ellie Schiller ’24 made two incredible saves to keep the visitors off the score sheet. At the end of the 80 minutes the teams remained tied at zero. It was an entertaining afternoon of soccer and both teams put on a great performance!

Boys JV Soccer:
Our first full game was a nice showing. We won 8-0 with very well connected passing through the midfield. Our defense and goal keeping maintained an impressive 80 minute clean sheet. The attack was relentless, generating pressure and turnovers all day. Goal scorers were Taeeon Kong (2), Theo Lewis (2), Tomas Cushman (2), Jarvis Shema, and Brick Johnson. While we coaches are excited by the high quality play, we were most proud of the team’s support of each other and the respectful sportsmanship throughout the game.

Boys Varsity Soccer:
The boys varsity soccer team defeated visiting Salisbury 3-0 to improve their early season record to 1-0-1 after earning a come from behind tie on Wednesday at Avon.

Varsity Football:
Deerfield opened up the season with a convincing 49-7 victory over Lawrenceville.  RB Nick Peltekian made his mark in his first game in Green and White.  Nick had 9 carries for 155 yards and 2 TDs and added a 7yd TD reception in the 2nd qtr.  He also played most of the game on defense and made some key tackles.  Right behind Nick was WR Elic Ayomanor who scored 2 receiving TDs, one in the 1st quarter and one in the 3rd quarter.  WR Geoffrey Jamiel rounded out the offensive scoring in the 4th quarter on a beautifully thrown 26 yard pass from Freshman QB Cole Geer.  On defense, OLB Christian Reavis intercepted a Lawrenceville pass and returned it 19 yards for a touchdown.  In total, Deerfield had 4 interceptions from 4 different players.  Reavis, FS Owen Bunten, CB Wedner Cadet, and LB Sekou Roland all had interceptions and good returns.  Up front, Deerfield put a lot of pressure on the QB and had 4 sacks.  LB Bob Provost, DE Cooper DeMallie, DL Joe Metzger, and DE Henry Foster all recorded a sack.

Girls Thirds Volleyball:
Thirds volleyball recorded their first win of the season in their home opener against Suffield Academy on Saturday, September 18th.  Julia Hoie was impressively consistent in her first game as a setter.  Sydney Dinkins and Olivia Smit blocked well at the net, and Simi Lawal, Mia Calcano, and Alice Wu contributed strong serves.  Allison Kostiuk sealed the win with 13 straight points on serves in the third game.  Next up is a game on Saturday, September 25th at Stoneleigh-Burnam.

Boys Varsity Water Polo:
The team fell to Brunswick and Choate at the Choate Quad meet.

Varsity Field Hockey:
On a beautiful Wednesday Girls Varsity Field Hockey traveled to Berkshire School for our first game of the season. Sage Piekarski ‘23 scored a quick goal in the first few minutes off of a penalty corner. Following this goal, it took a period for us to get back into the game, as Berkshire stepped it up and had multiple scoring opportunities. Berkshire answered back with a goal in the first quarter, and then found the back of the net again in the second quarter, bringing the score to 2-1. Deerfield gathered and refocused their efforts at the half, hoping to find the back of the net and control the pace of the game. The third quarter found us more spread out and using the width of the field, and Sage lifted the ball on a scramble in front of the goal to bring the score to 2-2. Deerfield kept working hard through the fourth quarter, but the score remained at 2-2 at the end of the game. As we headed into 7v7 overtime, the girls were ready to come out of the game with a win. Deerfield played beautifully right from the start and made great connections up and down the field. There were a few great saves from Lauren O’Donald ‘22 on our defensive end, and then 2:40 into OT, the ball was brought down the field and Sage found Maddy Zavalick ‘22 near the baseline for a beautifully placed goal that brought us a 3-2 victory over Berkshire School. Lauren O’Donald had some fantastic saves in every quarter, and anchored our defensive unit with her skills and effective communication. We are ready to start preparing for our game at Pomfret this Wednesday, September 22nd at 4:00pm.

JV Volleyball:
JV has yet to play its first game, but the players are hard at work preparing. We have scrimmaged ourselves multiple times, with exciting results. Even potential starting lineups for are first game are challenged by there teammates, which speaks to the depth of talent on the team. Players are busy improving there skills and learning new positions, and we look forward to competing for the first time in 2 years.

Girls Cross-Country:
The Deerfield cross country teams hosted their first meet in almost two years this fall, welcoming teams back onto campus for the Brush Invitational. The runners braved the heat and humidity to run the brand new course, and the Deerfield girls Varsity and JV squads did great. Although the race wasn’t scored, each and every runner was able to feel accomplished and proud of their achievement. The team supported each other every step of the way, enjoyed munching on the apples kindly provided by Mr. Brush, and cooled off in the river once the meet was over. Earlier in the week the team had gone up on the Pocumtuck Ridge for a long run, visited the M&M trail for an off-campus recovery run, and did a workout on Soldiers. An eventful week, capped off by a great race!

Boys Cross-Country:
Deerfield boys cross country enjoyed their first competitive efforts of the season at the Brush Invitational 3k and 5k this past Saturday. Peter Brush, Deerfield faculty and XC coach emeritus, inspired the team with apples and good cheer, and the boys responded with strong efforts at all levels of racing. The 3k event featured five DA runners in the top 15 finishers: Jackson Collins ’23, Chas Arnold ’25, Finn Broder ’23, Ethan Li ’25, and Paul de Bruyn Kops ’24. Chas and Ethan deserve particular commendation for racing well in their first ever Deerfield appearances. The 5k event featured a big individual win from Deerfield’s co-captain Quinn Hampson ’22, who cruised through a controlled effort to take the race in 16:33, just a few seconds shy of his PR and an exceptional opening mark for the year. Maxwell Wang ’25 raced to DA’s number two spot in his debut for the team, cementing his reputation as a fierce and smart competitor. Rounding out the top five were Carson Bynum ’23, Robbie Hua ’24, and Blix Salz ’24, while Joe Brown ’23 and co-captain Chase Cherewatti ’22 worked together to sneak under the 20 minute mark in 19:58 and 19:59 respectively. Overall, it was a solid first outing for the Deerfield harriers, and the varsity seven will look forward to next week’s challenge at the Canterbury Invitational.

JV Field Hockey:
This past Saturday, swept up in a mix of excitement and nerves, the JV field hockey team stepped onto our home turf to play a real live opponent — first game since Choate Day 2019. It’s been a minute! The 0-0 tie against Berkshire (a team that, in recent years, we’ve lost to) does not fully capture our girls’ energetic teamwork, accurate passes and shots on-goal, the intense mid-September heat, or our sense of collective accomplishment. The day felt like a win. We’ve decided this year because of numbers (our roster tops out at 26!) to divide the team into three sub-teams, such that each sub-team plays in 8 of our 12 games (including both Family Weekend and Choate Day), making allowances for injuries and illness, potential off-campus or precluding obligations, and family attending a given game. A complicated calculus, but one that allows us to make sure everyone plays in as equitable a way as possible. So, with a bench five players deep, we took on Berkshire. Highlights include some incredibly consistent passing up the field between the middies and forwards — notably between Charlotte Steffensen ‘25 and Jo Louis ‘23; clutch saves in both halves by our two goalies, Ashley LaBrucherie ‘23 and Juliet Amadeo ‘24; and predictably great defensive work by senior Captain Tioba Akinjaiyeju ‘22. We’re super excited for this season!

Boys Jr. A Soccer:
In a strong start to the season, the boys’ Junior A soccer​ team achieved a 14-1 victory over Brattleboro High School’s thirds team at home under a warm September sun. Though Brattleboro arrived with less-than-ideal numbers (having only 11 players and no subs), Brattleboro put up an excellent fight, and Deerfield’s Junior A team played with sportsmanship and respect. ​Contributing to the 14 goals were Winston Cho, Jack Willett, Yurok Song, James Kurto, MacGregor Hynds, Will Yang, Caleb McDaniel, Cairon Harrison, and Alex Rolfe (who shot an impressive 4 goals in 10 minutes). A good clean game from start to finish, the match offered Deerfield a chance to find a team groove; one highlight of that groove was Song’s 6 assists. The team will return to the field in a home game against Taft on Saturday afternoon. 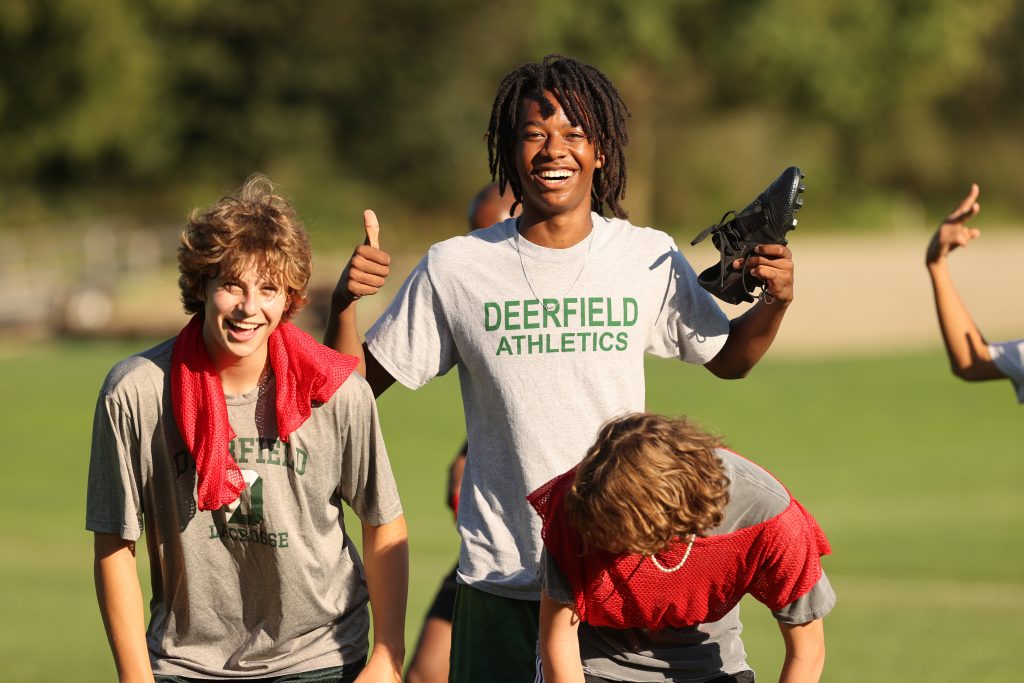