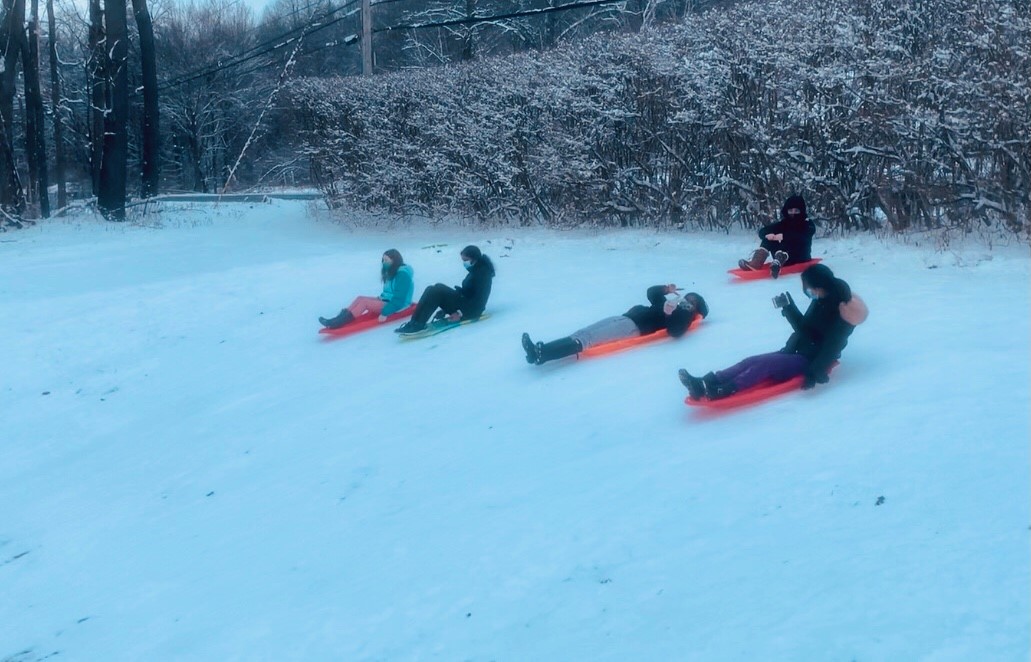 Deerfield winter teams are back in action! The athletics week in review has resumed to offer a recap of each team’s week of practices. Read on to learn more about how each team has started their season.

Girls Varsity Basketball:
We had our first official week of basketball, and the team hit the hardwood enthusiastically!  We were not allowed to do any contact drills for the first 5 days, so we stuck with passing, shooting and dribbling skills, and threw in two days of our strength and conditioning circuit and a Friday evening yoga session.  On Monday and Tuesday, we were able to do some 4 on 4 scrimmaging and bring back our beloved 11-man and 30 and 30 drills.  We met as a team on the first day to talk about both “the things we can’t control” and “the things we can control” as a team.  The things we can’t control, we had to just let go, including what this virus does to our ability to play games.  We focused on embracing the things we can control, which include our attitude, intensity, teamwork, friendship, energy, spirit, positivity, kindness, and safety.  We also chose our team motto to carry us through this most unusual season – FUEL THE FIRE!  The girls were inspired by the idea that they must provide their own fuel for stoking the flames of our team this year, and they committed to keeping it going strong. 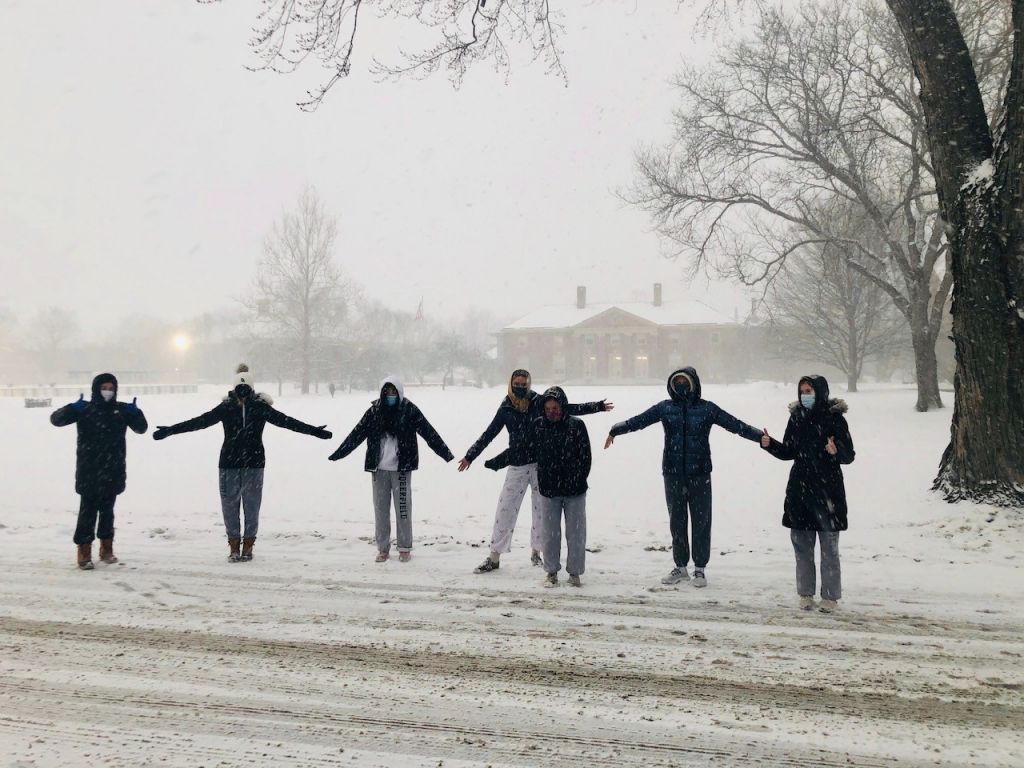 Girls JV Squash:
The girls on the JV squash team had an excellent second week.  They came to the courts ready to play every day, and, on Wednesday, the team hit a total of 108 rails that hit a target.  While we could not have our modified “challenge matches” on Thursday, the girls ended the week by playing a game and bonding as a community.

Girls Varsity Swimming & Diving:
The girls enjoyed another “Green” vs. ​”White” team meet today and some of the girls even broke their “personal best” times.

Boys Thirds Basketball:
So far this winter season, the boys thirds basketball team has been enjoying skills drills, and some games like Knockout. The team enjoyed a yoga session with yoga instructor, Lindel Hart, which was a first for many on the team. A scrimmage with the JV team is hopefully on the horizon!

JV Swimming:
JV Swimming jumped into the pool this week 21 strong!  With only 5 returning swimmers, the squad has had fun making new friends, learning new strokes, and growing stronger daily.  Led by seniors Janie Doyle and Maddie Poole, the JV squad swims a mile or more each day and is focused on improving technical skills and stroke mechanics.  The team swam their first timed 50 free last week, setting a benchmark that they are sure to surpass as the season progresses.

Girls Thirds Squash:
Our team has spent the opening weeks making the most out of public health restrictions by focusing on fundamental drills, taking a team walk through the North Meadow, doing yoga with Mr. Hart, and playing lots and lots squash in small cohorts. Almost all the players are new to the sport and are proving quick studies at learning the ropes. We look forward to our first challenge matches of the season next week.

Boys Varsity Hockey:
The BVH team had another good week of practices highlighted by a series of small games on Wednesday afternoon and some old fashioned shinny on the ODR on Saturday. It has been great to see the guys put the specific skills we are working on into game situations every day. Despite the inevitable ups and downs, the energy and intensity from the team has been fantastic and we are looking forward to raising the bar every week from here on out.

Boys JV Squash:
It has been great start out on the courts as we welcome a large group of returners back to the JV squad this winter in addition to some talented underclass players.  The team has focused primarily on individual drills, trying to hit tight rails consistently and sharpening up skills that grew rusty in the offseason.   As the season progresses, the boys are excited to start forming teams and continue to improve skills and fitness.  The boys have been incredibly upbeat and positive this month, it’s going to be a great season.

Girls Thirds Basketball:
Girls thirds basketball had a fun week, making the most of both court time and outside time. Whilst on the court, the girls primarily focused on honing shooting and dribbling skills, building strength and fitness, and simply enjoying being together as a team – on Friday we were able to celebrate the whole team being together for the first time this term!  Off the court, we couldn’t turn down an opportunity to play in the fresh snow, and so on Wednesday we gathered some sleds and spent practice enjoying the outdoors and each other’s company.

Boys JV Basketball:
The first two weeks of practice for the Boys JV basketball team have been filled with enthusiasm, hard work and positive spirits. Our returning seniors, Tommy Leimkuhler and Sultan Lawal in particular, but also our other returning players, have led the way by example, helping the team develop good work habits and camaraderie. This has been particularly challenging as we have been working primarily in small groups on skill-building drills and conditioning, slowly making our way to a point where we can use more team-oriented drills and scrimmage on a regular basis. It’s an exciting and fun group to work with and we are looking forward to seeing their progress over the season. 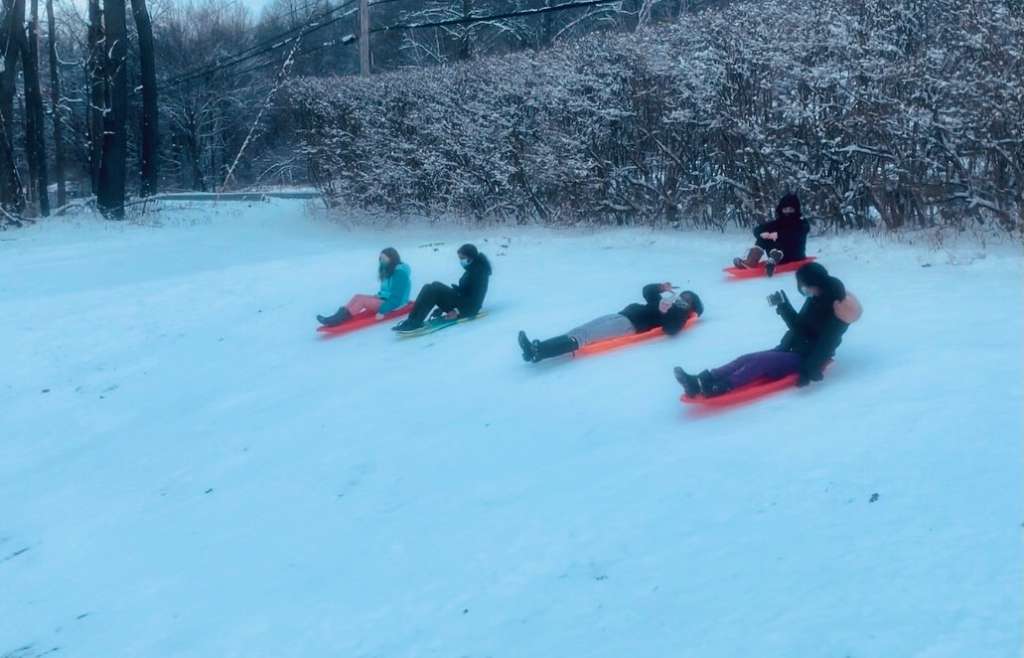