This week we want to give a huge shout out to sophomore Aoife Bruce.  Due to illness, we had two players who were unable to dress for our Wednesday game against Suffield.  Aoife was asked to step into a big role for the game as a starting guard.  We gave her the toughest defensive assignment of closely-guarding Suffield’s best player, and she did an outstanding job.  She was also an important offensive spark for us, using her incredible jumping ability to get her hands on several offensive and defensive tips and rebounds.  She contributed six points on rebound put-backs to help us secure our 13th win of the season.  We are so grateful Aoife is a part of our team, and we admire her passion for the game and admirable work ethic.

The girls JV hockey AOTW is Maddy Zavalick ’22. Maddy is a fierce defender who often steps up offensively for us as well. She scored three huge goals in our games this past week against Williston and Choate, with her Choate goal helping to lead us to the 2-1 victory.  She has an epic slap shot and is relentless in her efforts on the ice. We love that she plays the game with a huge smile on her face too! Congrats on a great JV puck season Maddy—keep up the great work in our final three games!

The thirds girls basketball team’s player of the week is Arieanna Lewis-Pugh. Arie is a true force on our basketball team! When Arie plays hard, she is unstoppable, and her energy sweeps the entire team up with her. Arie is a fantastic offensive player, making an array of shots that can confound the opposing team, but she also works hard defensively and makes consistent steals. In our last game, Arie brought a huge amount of energy and intensity to the court, and this helped the whole team to have a really great game. Arie brings a fun attitude to each of our practices, and she helps to ensure that we are always having fun. Arie is a wonderful part of our team!

Maddalena Honablue’s incredible work-ethic reaped rewards this week, earning her an Athlete of the Week Nomination in JV swimming.  Maddalena recorded season best times in the 50 backstroke and 100 freestyle in Wednesday’s tri-meet.  She followed those stellar performances with outstanding, season-best times in the 50 backstroke and 50 freestyle during Saturday’s Nick Whyte Sprint Invitational. 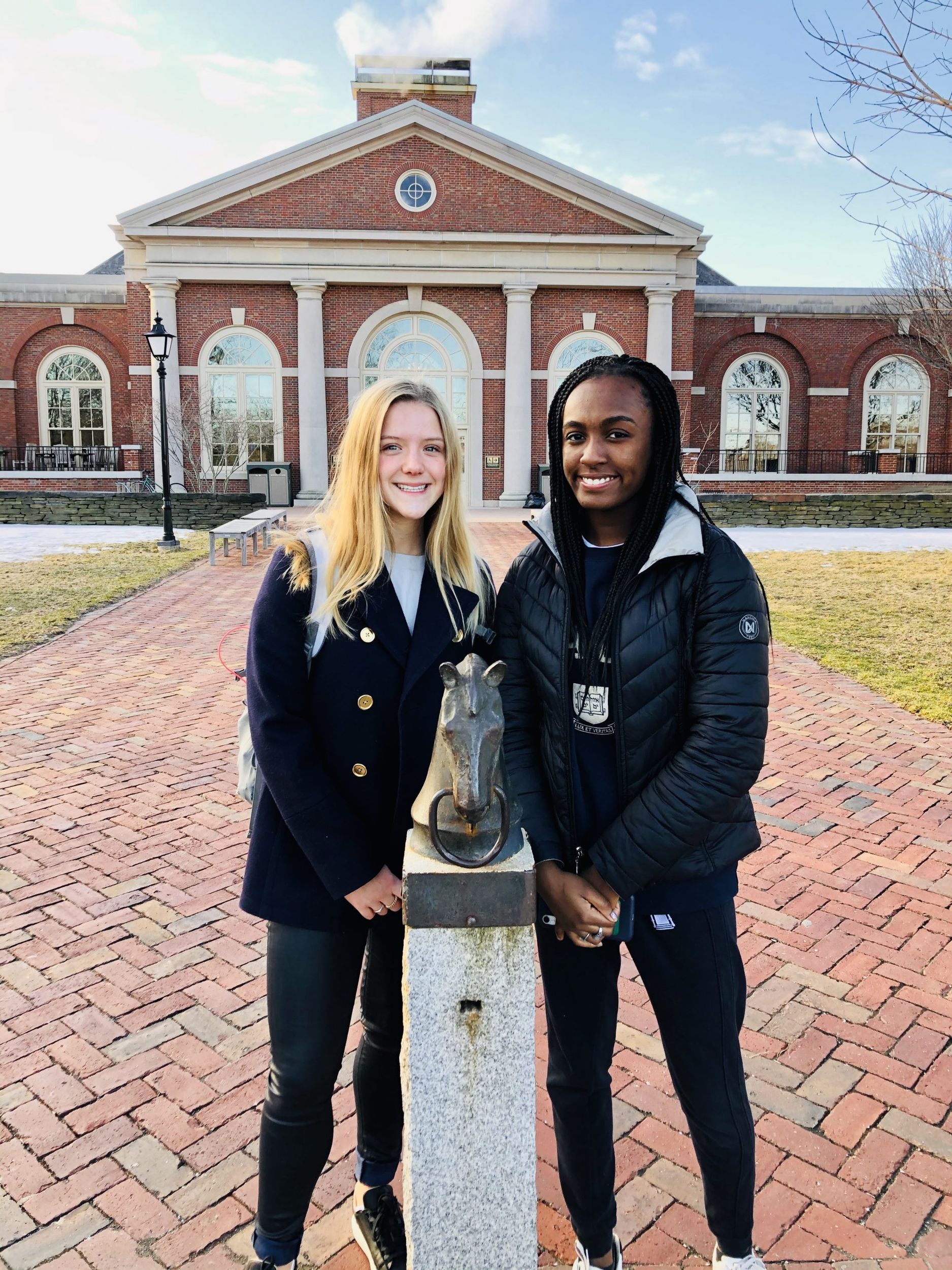 Amateur wrestling is practiced internationally and featured in the Olympic Games as freestyle and Greco-Roman. One style sharing similarities to each is collegiate wrestling, and is practiced in universities and secondary schools. Remarkable moments in DA wrestling transpired on 2/15, when gathered at Hartford Armory for the New England Independent School Wrestling Championships, Angela Osei-Ampadu won three matches, each by Fall, and was awarded 1st place as Girls New England Champion.

Sydney Cresta is our Athlete of the Week for not only her game winning goal against Berkshire, but her steady offensive presence all season long. Sydney has a knack for finding the back of the net, and over the course of the season has been someone we can count on to get a goal when we need one, leading our team in both points and goals. She’s done whatever is needed for the team, and always has a smile on her face, keeping the energy high. She’s been a great addition to the team this year, and we look forward to a few more goals out of her before the season is over!

Rarely have two JV squash players shown the kind of dedication to improvement that Tino and Will have this season.  They both approached practice each day with incredible positive energy and a determination to improve their games.  Both players have grown in their skills and contributed meaningfully to the squad while also stepping up to play on the 3rds team as well.  It’s been an exceptional season for Tino and Will!

For their steady leadership as swimming captains this year and their impressive performances at their final home meet at Deerfield, Mason Zhao and Thatcher Smith are the athletes of the week for Boys’ Varsity Swimming & Diving. Since their arrival at Deerfield as new sophomores, Mason and Thatcher have been consistent and significant contributors to the team’s success. Therefore, it was fitting that they kicked off last Saturday’s meet with an impressive 1/2 finish in the first individual event of the meet, the 200 Free. Both earned season best times in this exciting race and set the tone for the rest of the team. Mason also swam a season best time in the 100 Free with a 49.85 and Thatcher followed him in the 500 Free with a 6-second drop, swimming a 4:55.14. These senior captains pushed themselves to ensure team victories against NMH and Hotchkiss on Saturday and we commend them for their hard work and commitment to Deerfield Varsity Swim & Dive over the last three years.

This week the boys JV hockey coaches have picked ninth grade defenseman Darien Chiang as the team’s athlete of the week. All season long Darien has been a pleasure to coach and has been a great teammate to all. He, along with his trusted defensive partner Alex Strait, gets called for power play and short-handed situations every game. Darien is a terrific talent and he has played a significant role in the team’s success all season.

Darien is always one of the first players on the ice to start a practice as well as one of the last to leave the ice every day. He is a gritty competitor with a huge smile on his face when he plays. You should come watch this kid play! He’s good!

On Saturday, our JV girls were dealt their first loss of the season to a talented and also undefeated Loomis team. Our girls gave it their all and never quit throughout the entire game. Additionally, what makes this team so special is their never ending support for one another.

Anne Kane is so deserving of our Athlete Of The Week! She is a natural leader. On the court she anticipates well and is nothing but hustle on the floor. When resting and on the bench she constantly is giving encouragement to her teammates. Every practice and every game she is seen with a smile. She exemplifies the very best of leadership by example. Congratulations Anne! Well done!

Tyler scored a season high 20 points in our 49-44 win over Williston last week and has been one of our leading 3-point shooters all season.

Kyle scored a huge goal in our game against Avon and his physical play sets the tone for us day after day. He works hard, is a great teammate, and plays the game the right way no matter what. We will lean on Kyle heavily down the stretch as we make a push for the playoffs.

This is Lauren’s second year on the Thirds squad, and she’s been a veteran presence since the first practice. She’s just as committed to improving her squash game as she is to building team morale and having fun. From the courts to the spin room to the van, Lauren brings a smile and an encouraging word for everyone.  Her game has become stronger every week. Nobody on the team is better at digging a tough lob serve out of the back corner. To watch her matches is to see her brain working, devising the best approach to each shot that will keep her opponent off balance. In Wednesday’s match against Suffield’s JV team, the impact of that expert strategizing was checked in the first match by nerves from playing in front of a home crowd, and she struggled with execution in the first game, which she only narrowly won. But she collected herself, confronting the mental challenge head on, and easily won the next two games and match. Lauren’s been part of the backbone of this team all year, and we look forward to her helping us finish the season strong.