The girls JV athlete of the week is Sara Ito-Bagshaw ‘22, for her hard work, and willingness to try new things. Being new to soccer this year, Sara has been soaking in the sport and learning as much as she can. She’s been willing to stay after practice, and between drills to work on the mechanics, and it’s been paying off! Sara stepped up in our game against Pomfret, and was a stalwart member of our defensive unit, able to stop the offensive drive with her aggressive yet smart defensive play. We can’t wait to see how much more she progresses as the season goes on!

This week, our goalies posted 2 clean sheets against Taft and Kent.  In the Taft game, Quinton Stephens was in the zone.  He made a handful of ridiculous saves in the first half that kept us in the game.  He faced a number of shots from inside the penalty box and came up big on all of them.  Usually, we switch goalies at halftime, but Quinton was “dialed in”.  Abdiel Torres exemplified what it means to be a great teammate and said that Quinton should stay in goal for the second half.  This was a selfless decision by Abdiel.  Eventually, we scored a goal in the last 4 minutes to take a 1-0 lead.  We are lucky to not only have two incredible goalkeepers, but to have two goalkeepers that are also great teammates.

For varsity volleyball, this week’s athlete of the week is Meghan Holland ‘23. Meghan has been a great teammate all season: supportive, hard-working, energetic, and team-focused. On Friday she got significant playing time as our setter and notched 12 assists in our victory over Miss Hall’s School. Well done!

Maddie collected her first official win of the season on Saturday at Westminster, running away with the girls’ varsity race by over a minute.  Westy is among the toughest courses we see all season, and it was a hot day for a distance race, but Maddie was her usual cheerful self as she hammered away at the competition.  A great start for this newcomer to Deerfield XC!

After finishing 24th in the JV race at Westminster in 2018, Giles broke through in a big way on Saturday to take 17th overall in the Varsity race, finishing first for Deerfield.  Giles ran a smart race, working his way toward the lead pack gradually throughout the 5K course, and he finished with a strong kick over the final 300m on Westminster’s track.

Taeeon Kong has been a foundation of our team since the season began. One of the goals at this level is to learn to be aggressive getting to the ball, and no one models that better than Taeeon. He rarely stops running in the course of a game, rocketing back and forth across the field in the blink of an eye. In those rare instances when opponents get past him, he doesn’t hesitate to turn around and chase them down. He brings that same determination to practice, setting a great example of how to mix hard work and fun.

Sunshine Chen is a new addition to the JV Volleyball Team.  Sunshine has a skill-set that allows her to play almost any position on the court and make an impact.  Recently she has stepped up to take on the role of setter and, somehow, always makes her way to the ball.  This past Friday Sunshine displayed her serving skills and her endurance at our Miss Hall’s game as she served 18 in a row in Set #3 to lead us to a 25-3 win.  Sunshine is positive and motivated and we are happy to welcome her to the team!

The varsity field hockey AOTW is Talbot von Stade ‘21. Talbot consistently works hard in every practice to take her game to the next level. She has become a defensive force for us and brings up the level of play every time she steps on the field. She is poised and humble, and always supportive of her teammates. We love coaching Talbot and admire her leadership and athleticism. Deerfield is fortunate to have athletes like her at our school! 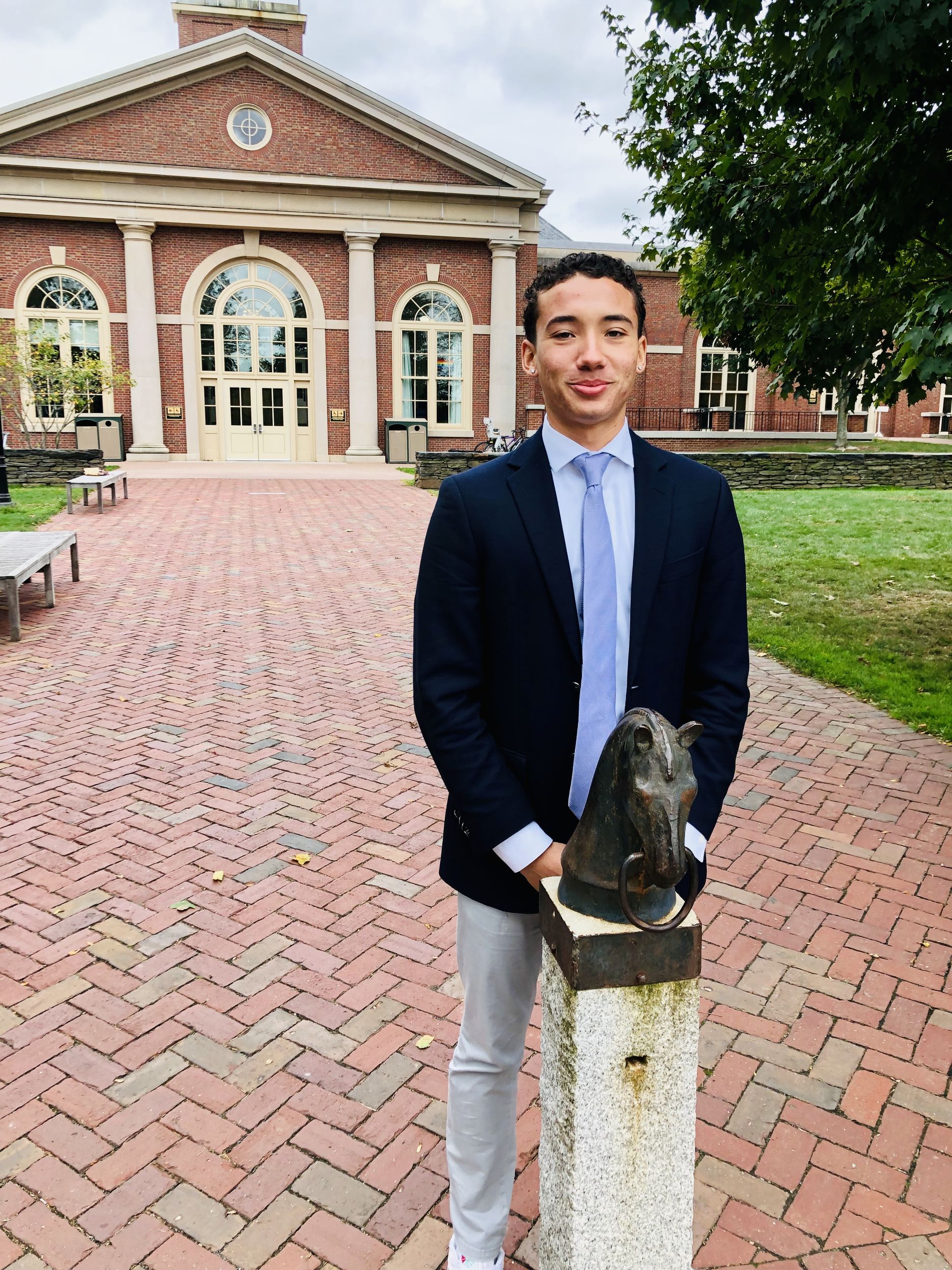 Though an injured shoulder has kept Sim out of the pool for ten days, he has not reduced his commitment to the team’s success.  A prime example of his dedication emerged as the players completed their annual trash cleanup along Mill Village Road last week.  True to his beachcomber days, Sim walked knee deep in the high grass on the lookout for the many bottles and cans that passersby had discarded.  Sim did not settle for less than his full effort.

This week, Morgan Moriarty ’22 is the girls varsity soccer AOTW. Morgan is a tireless worker at practice every day and is consistently looking to raise her game to help the team and does it all with a smile on her face. Morgan is a great supportive teammate, she is focused, positive and always leads by example. Congrats, Morgan!

Jack Chorske. Jack is one of our captains again this season. He’s been a great leader for the team and brings a great attitude to practice. His performance in goal is one of the major reasons we’re off to a strong 2-0 start this season.

Ainslie Kell ’23 is Thirds Field Hockey’s Athlete of the Week! Despite her clear field potential, Ainslie stepped up when she realized that her team did not have a goalie.  She stepped into the goal for the first time last Friday and, with only three practices under her belt, she played a terrific game against our “town rivals.”  Ainslie is hard-working, athletic, and positive in her attitude towards the game.  She made save after save in her inaugural game, and she unflaggingly supported her teammates throughout.

Brendan Kish ’20 is boys’ varsity soccer player-of-the-week.  Brendan’s play in center-midfield has been key to the team’s success thus far.  He is a complete player, contributing to both defending and attacking actions and providing leadership on and off the field.