This week the boys JV hockey team would like to nominate two of their key players on the season to be athletes of the week. These players are Alex Strait and Garrett Moe. Last week the team beat loomis 5-1 and then Taft on Saturday 4-3. Both games were well contested and the difference came from leaders on our team just outplaying our opponents when it mattered most in these games. Garrett scored two goals in the third period against Taft. With the team down 3-1 going in to the third period Garrett and line mates, Jack Shanahan and Will Dale took matters into their own hands and got their team back into the game. Alex Strait, a defenseman, has logged huge minutes in all our games this season and has really played well all season long. Alex is a difference maker for us on the blue line. His strong defensive play in our zone has been complimented lately with his ability to contribute key rushes on the offensive side of the game. These two are part of a team with lots of individuals starting to step up and help with our successes. Congrats to them both for a good week of JV puck!

Kami had two multiple-point games in last week’s victories over Williston (6-5) and Choate (9-0).  In addition to firing the puck over the shoulder of the Williston goalie to score a crucial goal, Kami has been consistently finding her teammates in front of the net to generate scoring chances.  Moving the puck in the neutral zone and keeping her feet moving in the offensive zone has made a real difference with her teammates, and has been a great model for our inexperienced players to emulate.   She also has helped out on defense when one of our defense-persons has gone down with an injury, penalty, or tired muscles.  She shines all over the ice.  Great stuff, Kami! 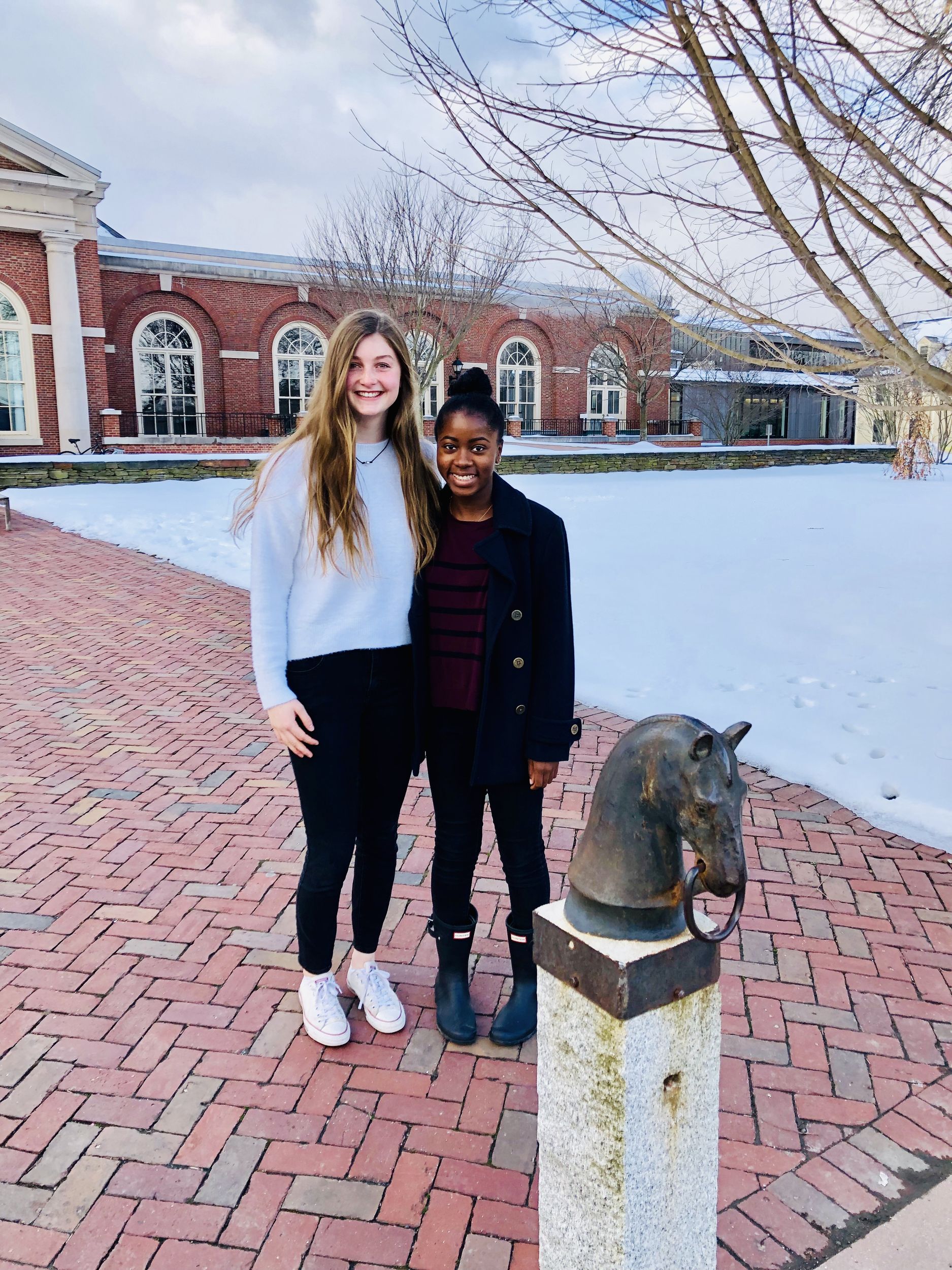 This week’s athlete of the week are Sarah Wright and Lily Steinwold, the GVH managers. Not only do they show up every day with a smile on their faces, but they go above and beyond the managerial duties for our team. Between the colorful tweets, water bottle fill up, stats, and in game score keeping, there’s no doubt that we have the best managers in the NEPSAC. Thanks to our two managers for all their hard work…and maybe next year they’ll lace them up with our team!

The JV swim team is excited to nominate Daniel Kang for athlete of the week.  Daniel’s determination and hard work is definitely paying off as he swam best times in the 50 freestyle and the 50 breaststroke in Wednesday’s meet against Bement and Northfield Mount Herman.  Daniel brings a positive attitude and a natural talent in breaststroke to each practice and is growing stronger and faster every day.

Ismay Anderson has earned an athlete of the week nomination for JV swimming.  She swam best times in the 50 and 100 freestyle in Wednesday’s meet against Bement and Northfield Mount Herman.  Her 100 freestyle time has improved 13 seconds over the course of the season and is a true example of the hard work she has done in the last 2 months.  Her 100 freestyle began with a fantastic dive and included excellent, newly-mastered flip turns.  Her time makes her a swimmer to watch and an important contributor to the JV team.

As one of the wrestling team’s three captains, Chris takes an active role in the day-to-day operations of the team. He leads the warm-ups, cleans the busses, and takes care of all the equipment. If he only did that, he’d be a good captain. But Chris makes a habit of exceeding expectations; his leadership extends far beyond the quotidian: it’s truly inspirational. Chris is always the hardest working athlete in the room. When his ethic inspires the team to work harder, the team pushes him to new heights. Every time Chris improves, his teammates are inspired to keep pace; every time the team reaches a new peak of intensity, Chris stays in the lead. We’re a better team due in large part to his dynamic, intentional leadership. Even now, in the post-season, as we head to the New England Tournament, we continue to benefit from Chris’s energy, commitment, and sincerity.

This week we celebrate Vera Grace Menafee (’20) as our Athlete of the Week! Vera brings so much energy to the court. She was unstoppable in the game against Suffield Academy. She was all over the court! Her ability to anticipate the pass resulted in several steals and points in transition. She led the team in scoring with a season high 16 points. Keep working hard Vera!

For his leadership in the pool and his outstanding performances in a wide range of events this season, senior captain Simon Lam is athlete of the week for Boys’ Varsity Swimming & Diving. Over the course of our last nine meets, Simon has swum every individual event except the 100 Breast and demonstrated that he is going to battle in any event where the team needs him. He is a fervently competitive individual who thrives when the opportunity to race presents itself so it is always exciting to watch him swim. Moreover, Simon’s dropping times in his relay splits this season further highlight his commitment to his best self for the benefit of the team. In practices this winter, Simon’s commitment to focusing on his training has shown through in his leadership in main sets. We are grateful for Simon’s leadership this season and we look forward to celebrating his four years of contributions to the team at the senior meet this Saturday. 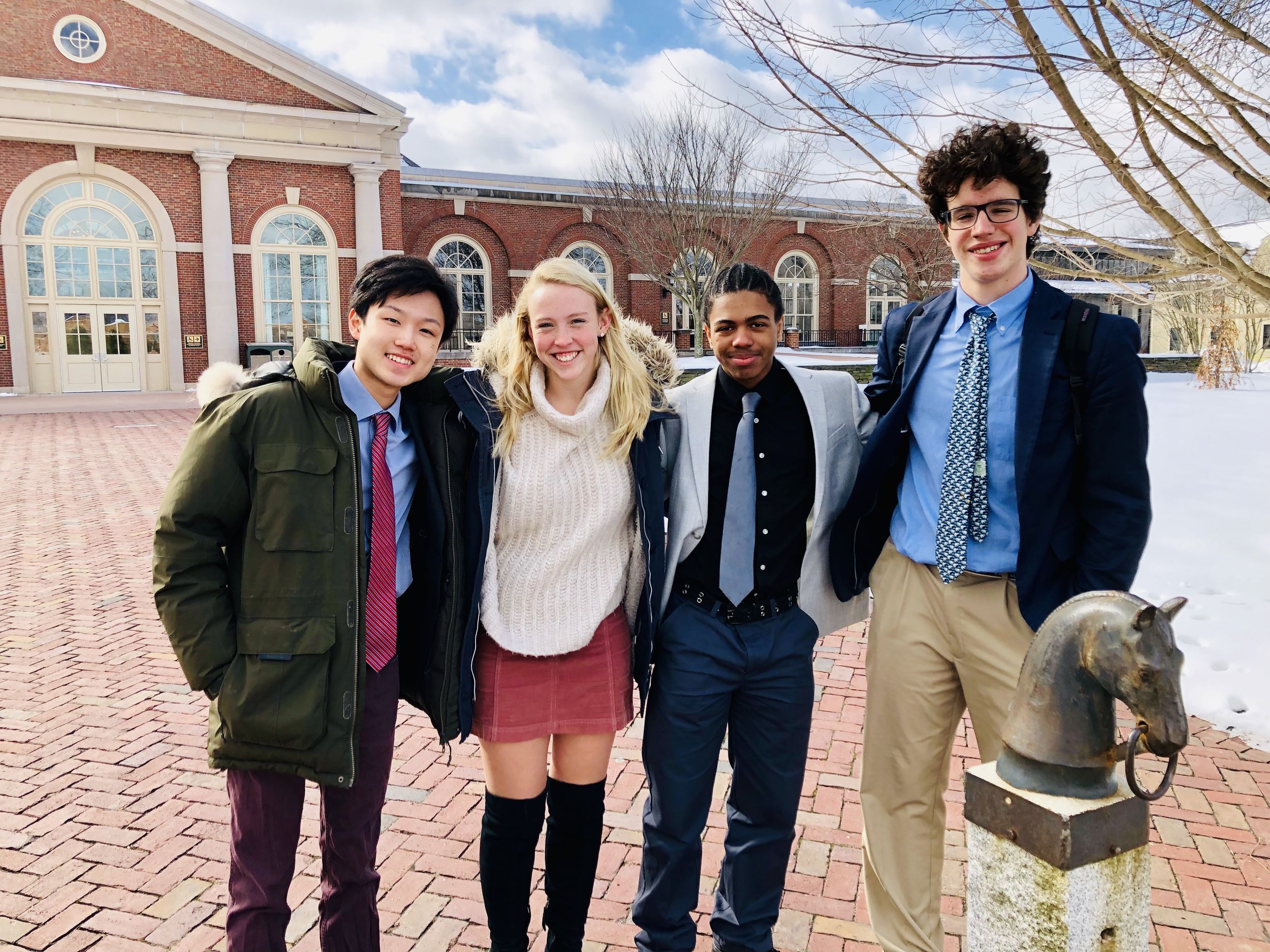 This ninth-grade trio of guards earns our Athletes of the Week. Ford’s efficiency in running the offense combined with Tysean’s defensive prowess, and Tyler’s ability to score the ball from beyond the arc have all made for exciting basketball over the course of the year for us. We are very excited by the promise these diligent and dedicated student-athletes bring to Deerfield, both on the court and throughout the broader school community. They epitomize the idea that lasting friendships are formed wherever hard work and fair play are their own rewards. Well done, and Go Big Green!

Sasha Hinckley’s dedication to the game of squash and to the varsity squash team —  despite facing a variety setbacks this season — has been truly admirable.  This past week, after recovering from a sprained ankle, Sasha really stepped up in practice, pushing herself and her teammates to take their game to the next level.   Sasha, a four year varsity veteran, has also been instrumental in helping to keep the team’s tight-knit spirit alive.  Kudos to Sasha for being the Girls Varsity Squash Team’s Athlete of the Week.

The girls swimming and diving athlete of the week is Niki Pelletier.  As a junior, Niki is the glue that holds our team together.  She comes to practice each and every day with a smile on her face, eager to work hard and motivate her teammates.  During a challenging set, it’s Niki’s voice we hear saying, “we can do this!” and her encouraging words inspire all of her teammates, not just those in her lanes.  Her love for the sport, along with her competitive nature and incredible talent have allowed Niki to become one of the best swimmers in New England and we are lucky to have her.

When Girls Thirds Basketball put out the call early in the season that we needed more players, Aerin Lo stepped up, and we are so glad that she did!  Despite her unfamiliarity with the sport before the season, Aerin has been diligent about learning the sport, always making sure she understands the “why” behind our plays and what we ask her to do.  She has developed into a defensive specialist, a force to be reckoned with when we play man-to-man defense.  For her willingness to play, her curiosity, and her effort on the court, Girls Thirds Basketball names Aerin as our Athlete of the Week.