Tysean Price is our AOTW. Despite not having a lot of experience playing soccer, Tysean has the best energy and attitude on the team. He shows up at practice every day ready to learn and get better and we appreciate his spirit!

This week we have two athletes of the week: co-captains Abby Bracken ’19 and Georgia Quesnelle ’19. As named leaders on the team and on the court, they showed their incredible leadership, spirit, and energy this week and throughout the season. Whether it was a quick word of encouragement, a reset in the on-court huddle, or their full-throated cheers during set transitions, they set an incredible example of how to be team leaders. Congratulations and thank you! 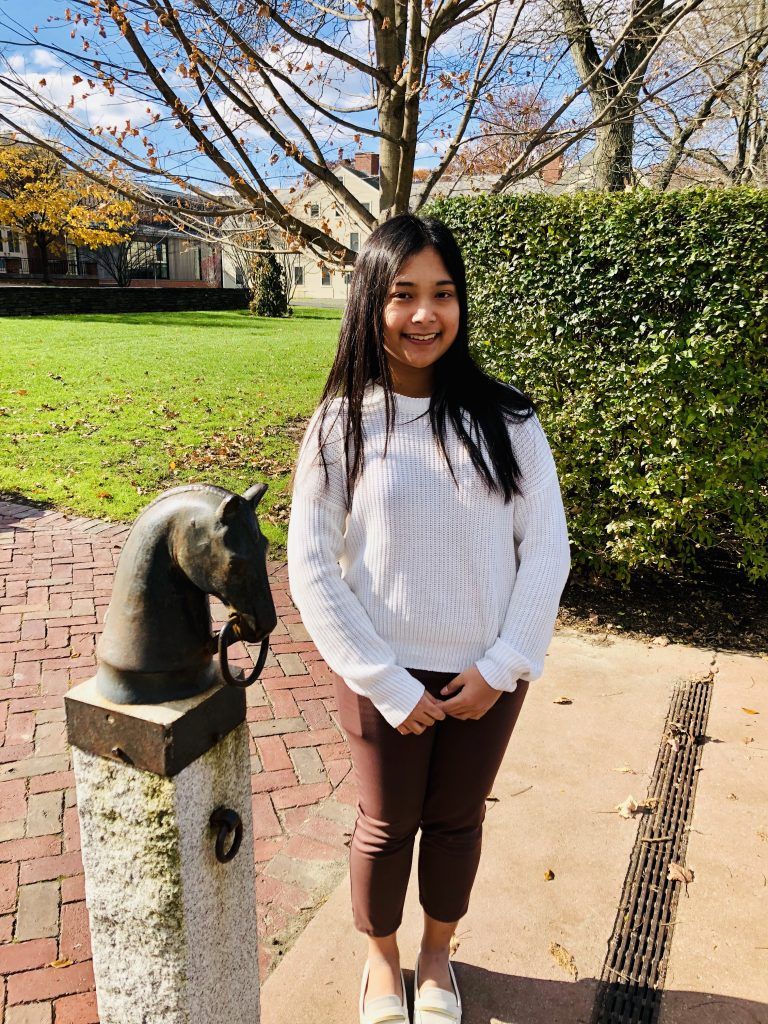 This week’s Athlete of the Week is Fourth Sukprawit. Fourth is new to field hockey and has worked hard all season to learn the skills and strategies of the game. She works hard every day in practice and gives 100% in every game. Fourth always has a positive outlook and no matter what happens, she rebounds and tries again. This week in our game against Bement, Fourth showed her hallmark resilience. After a number of plays where she nearly missed being in the right place at the right time or struggled to receive the ball, Fourth just kept trying. At the left wing, timing is of the essence. It’s difficult to time your run to the cage so that you beat your defender and arrive at the same time as the ball so that you have an open weak-side cage to score in. Fourth made a few solid attempts in the second half at the weak-side post but just missed the passes. Late in the game, however, she didn’t give in. Instead, she tried again. She ran to get in position to meet the cross ball as it arrived at the left post. With perfectly timed precision, Fourth received the ball and slipped it passed the goalie on the left post!  She not only scored her first goal of the season, but won the game for Deerfield! Fourth earns Athlete of the Week for her hard work, tenacity and resilience. It was truly a triumphant moment!

The JV volleyball athlete of the week is 9th grader Jean Chun ’22.  Each day at practice, Jean shows that she really wants to play volleyball.  Usually one of the first players to show up, she immediately goes out onto the court to start hitting the ball with the other girls as they arrive.  As the season has advanced, Jean’s progress in practice and her intense focus have earned her more playing time each match.  She has an ever-increasing awareness of her placement on the court and what holes she should cover on defense.  This past Monday at NMH, she had an opportunity to play two full sets, and she played her best games of the year.  Jean was a solid wall on defense, picking up every ball that came her way.  Her net play repeatedly caused the team to cheer, as she successfully blocked and spiked on multiple important plays.  We look forward to her contributions during the last two matches of the season.

With the regular season over, the team salutes its four scorekeepers—Monet Meyer ’19, Melisa Gurkan ’19, Maddie Clough ’20, and Morgan Clough ’20. Several referees praised the skillful manner in which the girls ran the scorer’s table for our home contests. The players appreciated how the girls added to the team’s spirit.

Senior co-captain Valerie Hetherington is the girls varsity soccer athlete of the week. After being sidelined due to injury for several weeks, Val returned to action for the Big Green last week. She wasted no time with her return, making an impact right away with her energy, enthusiasm and big time saves – from her pre-practice cheers to end-of-game breakaway saves vs. Hotchkiss. In the final week of the season, we look forward to Val continuing to make an impact!

This week’s athletes of the week for Varsity Field Hockey are Maggie Roche ’19 and Juliet Perry ’19. Both of these senior players have demonstrated great leadership in the past week as we worked to prepare for and played in a competitive match against Greenwich Academy this past Sunday. Both players have showed excellent hustle and determination on the forward line; Maggie has done a great job of carrying the ball up the left side and sealing players with her speed, while Juliet has shown an incredible versatility in the positions she is able to play—all while exhibiting a highly competitive spirit and a ton of drive. We have truly valued these senior voices and their dedication over the course of the season, and we look forward to what they can do in our last two regular season games this week!

This young woman has been a true positive presence on the team for years. She was voted captain by her teammates last year and is always there to listen and act as their biggest cheerleader. Her running career was on the rise until she had to take a break due to an injury. Even though she was out of running commission for a few weeks, she came to every practice and bolstered the spirits of the other runners. She has recently been able to run again and has come back with a vengeance. Pushing through difficult courses and intense practices, she is a beaming example for commitment to the team. We are all excited to see what she can at New Englands. Every teammate is a better person thanks to her encouragement and compassion. For these reasons and many more, the girls cross-country athlete of the week is Ely Burke.

Francis Dooley ’19 is a postgraduate student who has made a big impact for the Deerfield Academy football team on the defensive side of the ball.  Dooley plays defensive end and he was all over the field leading the team in their impressive victory over Cheshire Academy 34-14.  Francis led the team in sacks and tackles for loss while forcing a fumble that was recovered on the 1 yard line and led to a 14-0 lead.  Francis continues to get stronger in his performances as the season goes on and we are excited to see what he will do next.