Congratulations to the Athletes of the Week!

For this week, Aoife Bruce ’22 is our athlete of the week. Aoife has continually improved throughout the season and it really showed in her play against Amherst last Wednesday. Her hits, court awareness, and serves were all excellent. And her teammates’ cheers and enthusiasm show the respect and joy she brings out in others. Congratulations!

Isha Rao stepped up like a champion as the Big Green Cross Country Machine rolled its way into Andover on Sunday. Because of a sick teammate, she was moved up to a scoring position for Deerfield and asked to run down two of Andover’s scoring runners. Running like the alpha female of a wolfpack, she bolted into the cool damp air for what would be her race of the season. From all reports via our cheerleading scouts across the heavily wooded trail course, Isha never let up; even on the monster of a hill that Coach Karbon called in Spanish “The Mother of all Hills.” By the time she exited the woods, she was bearring down on the finish line with a mission accomplished look clearly sparkling in her eyes. Isha did what every coach dreams of from their athletes- exactly what they are asked, and just a little bit more. Because of her undaunted courage in taking on the difficult assignment, and her execution of that task with gusto and verve, we award Isha Rao with our Girls’ Cross Country Athlete of the Week.

Giles had a big breakthrough at Andover on Sunday, racing his way to a more than 1-minute personal best over the 5K course.  Giles discovered a new gear throughout the race, embracing the challenge of running hard for twenty minutes and managing the attendant discomfort.  His drive and bravery will hopefully spur on some of his JV teammates to similar results in our final two meets.

The varsity field hockey athlete of the week is Lucy Miquel ’20. We were thrilled to have Lucy join the squad as a new junior. She is a hard-working, versatile player that brings a great attitude and work ethic to every practice and game. She has greatly improved over the course of the season and has contributed for us as both a midfielder and a forward. The team was thrilled for Lucy when she scored her first goal of the season against Worcester last Wednesday – it was a beautiful goal! We look forward to Lucy’s continued strong play over the next few weeks!

The JV volleyball athlete of the week is sophomore Angela Osei-Ampadu ’21.  From day one, Angela displayed extraordinary energy and enthusiasm.  Although she received minimal playing time in the early weeks of the season, her great improvements on the court have earned her more game time action.  She has great defensive awareness while playing the front row and her serves have become a reliable ally.  There is nothing more enjoyable than watching Angela celebrate a point-winning shot, whether the strike comes from her own hand or a teammate’s.  She cheers for every person and for every play, and she has been affectionately titled the bench captain.  We appreciate everything that she brings to the table, both on and off the court, and the team would certainly not be the same without her.

3rds field hockey’s Athlete of the Week goes to Sara Ito-Bagshaw for her hard work, tenacity and sportsmanship.  Sara works hard every day; she’s always running at top speed and trying to get to the ball first. She also helps make her teammates look better by working hard to send them a great pass or recovering on defense. Sara plays all over the field, and every time the coaches ask her to help out anywhere on the field, she agrees without hesitation. Sara is a fierce and fearless competitor, yet she’s willing to put team above self. Sara’s sportsmanship, work ethic and humility are the very definition of what it means to be a great teammate, and for those reasons, Sara earns Athlete of the Week. 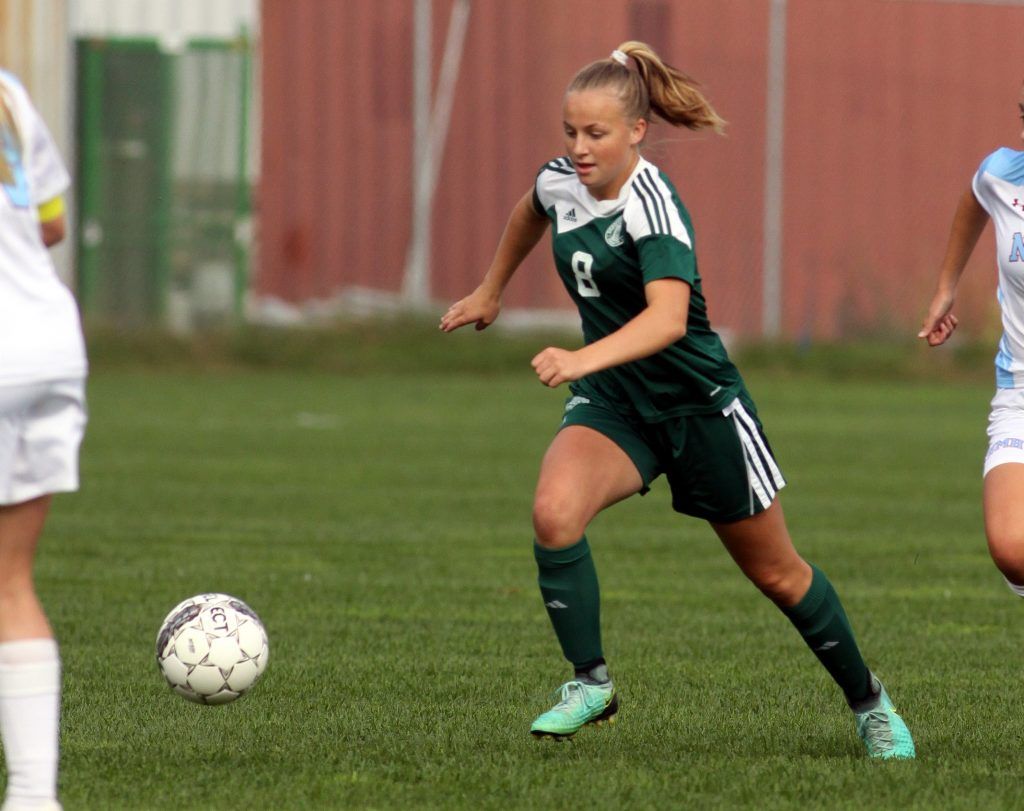 Bailey Cheetham is the girls varsity soccer athlete of the week. This past week, the Big Green found themselves down a goal to the Big Blue, but Bailey and the team quickly answered back to level the score 1-1 entering the half. A great display of her resilience and competitive spirit. Bailey brings contagious enthusiasm and positive energy to everything she does and has done so for her entire DA soccer career. Bailey’s team first approach, supportive attitude and work ethic are just some of the characteristics that make her a great teammate. Thank you and congratulations, Bailey!

Will Stultz is our AOTW. ‘The Wall’ has been a force on defense all season and has done a great job at both sweeper and right back. He comes to practice every day ready to learn and get better and is a great example to the rest of the team.

Andy approaches every practice with a positive attitude and gives awesome effort every time he steps on to the field.  He has become a true leader on our team, as he is a wonderful role model, particularly for the younger players.  Andy has played a handful of positions for us this year and is always eager to help the team out in any way he can.

From the first game of the season it was clear that Lily was going to play a significant role in our defense as sweeper.  She has led her backs with poise and clarity, reminding them to watch their angles and to recover as she steps up to tackle an on-coming attacker.  She has grown more and more confident that as the ‘last’ line of defense before the goalie, she must pressure the ball and know that her fellow defenders will recover for her.  In the circle, if our goalie does not make a save, you can bet that Lily’s stick will do the trick.  This past Sunday at Andover, Lily and Captain Goalie Lucy Blake ’19 worked their magic together, seamlessly communicating and having each other’s backs.  In addition, on many occasions Lily stepped up to save a break-away, getting her stick to the ball before Andover’s forwards were able to touch it.  As has been the case throughout the season, Lily positioned herself in the right place at the right time, and worked in sync with her fellow defenders.  Her leadership and focus were invaluable against the tough Andover JV squad, and she skillfully helped us end the game in a 1-1 tie, Andover’s first ‘non-win’ score of their season.

The polo players sincerely salute all the seniors who have contributed so much to the success the varsity and junior varsity teams have enjoyed this season. In demonstrating the power of shared commitment, disciplined play, and cheerful support, the seniors have left their younger peers splendid models to emulate.

Kristine Yang ’21 is our pick for AOTW for her grit and determination in our game against Andover. Despite being down early, she and the defensive core remained strong and poised. Throughout the season Kristine has laid out her body time and time again to block shots and passes, and her aggressiveness has led to turnovers that she effortlessly returns to our midfielders. Kristine’s play on Saturday helped us to make a comeback in the second half, and her solid presence accounted for many of our defensive high points.

Peter Sanford is our athlete of the week.  Peter has been a quiet, steady presence on the team this year.  He has worked hard to improve his goalkeeping as well as that of his fellow keepers.  He has excelled in his shot-stopping and distribution, and will have his first varsity start at home against Wilbraham. 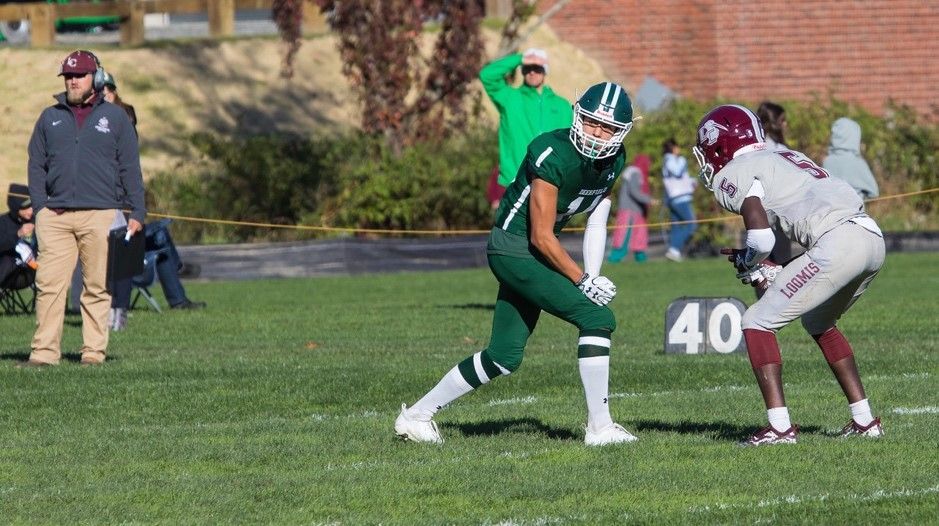 Kyle MacGillis ’19 represents the Deerfield Football team as the athlete of the week for his performance against Andover.  He led the team on offense with 8 catches for 103 yards and a touchdown.  Kyle is a very talented receiver who has paced the big green on offense and defense this season.  We are excited to see big things from Kyle the rest of the season.