This week’s Girls V Lacrosse athlete of the week is Bailey Cheetham.  In our overtime win against Westminster, Bailey won 10 of our team’s 17 draw controls, earned 6 of our 17 caused turnovers, and scored 2 goals and one assist.

Soo is our athlete of the week for her unreserved embodiment of the purpose of Deerfield’s athletic program on Saturday. She demonstrated a true love for the game of tennis and an unquenchable desire to challenge herself and improve, and exacted a remarkable win with sincere graciousness and true sportsmanship. When she learned her doubles match would not be counted no matter the outcome, Soo still wanted to play. The kicker: she elected to face Hotchkiss’ #2 pair alone in a game of “cutthroat tennis,” reasoning that the challenge would provide an excellent and competitive training opportunity. In the blink of an eye, Soo won 7 games before Hotchkiss could flip its scorecard to a 1, then polished off the proset, 8-2. Despite her ruthlessness on the court, Soo brings true joy to the team in practices and at contests and is perhaps one of the most friendly players in JV girls’ New England tennis, always greeting her opponent with a smile, a handshake, and an introduction. Soo is dedicated to improvement in practice, which has paid off in her growth this season as a player, and she has made huge strides in developing the mental toughness necessary in tennis’ constant wars of attrition. We are all grateful to have Soo on the team and at Deerfield. 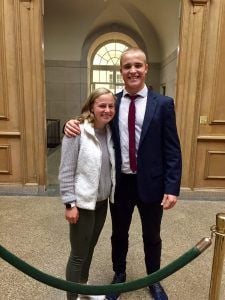 Bubba Fairman is the boys varsity lacrosse AOTW for his play versus Andover on 4/29.  Eight goals, two assists in less than a full game of play.

Henry Gustavson ’20 is Varsity Baseball’s Athlete of the Week.  In the doubleheader vs. Exeter, Gustavson pitched exceptionally well in relief during Game 1.  The game was a tight contest when Gustavson took the mound.  In three innings of work Henry struck out two and walked none.  He also contributed a hit in Game 2.  The freshman hurler continues to impress on the mound while contributing at 1B as well.  Gustavson earns respect for his focus, team-first attitude, and quiet approach to getting better every day.

Unseeded in the #3 doubles draw at the New England-Mid Atlantic Invitational, Alfi and Deepak blew through opponents from Malvern Prep (6-0, 6-0) and Penn Charter (6-2, 6-1), setting up a showdown with host Episcopal Academy in the semifinal. They got off to a slow start, dropping the first set 6-2 before taking the second 6-4. In the deciding ten-point tiebreaker, Alfi and Deepak went down 1-5 before pulling off an amazing 11-9 win! The final was much less eventful, as they took down a team from Haverford 6-1, 6-1 to bring home the championship. Their eight points accounted for 40% of the team total and helped us to a third place finish out of 16 teams.

Girls’ rowing’s Athlete of the week is Valerie Hetherington, for putting 100 percent effort into every practice, for bringing power to the boat, and for helping her crew come in second on Saturday at Pomfret.

Girls: Erin completed the 1500m/800m double at our meet against Hotchkiss and Loomis on Saturday, winning both events by wide margins.  Her 1500m time was the 4th fastest in Deerfield history, and her 800m time ranks 6th all-time, and both were her debut efforts in those events for the Big Green!

Boys: Ossie won his first ever 110m high hurdle race on Saturday, defeating all comers in our meet against Hotchkiss and Loomis.  He also finished 3rd overall in the high jump.

Senior Danny Finnegan shot a 38, low round for JV Golf is year, in defeating Eaglebrook, 19-5, on Friday.  We lost to Eaglebrook earlier in year, when Danny couldn’t play, and his performance led the way for us.

This week’s AOTW for JV Girls Lacrosse is Cornelia Mackay ’18. Cornelia’s high level of play and incredible consistency have earned her this week’s recognition. In our games vs. Williston and Westminster, Corn was the glue in the midfield that led to some fantastic transitional play, and she contributed in a large way to both of those impressive victories.

In the Boys 4V race, the Deerfield crew was one length down with less than 500 meters to go, but they pulled together and showed great toughness and drive to row through a strong Groton boat and grab the win by .5 seconds!  It was a fantastic effort by the entire boat and particularly impressive since it was the first race for both Tommy and Oliver.  Great work, guys!