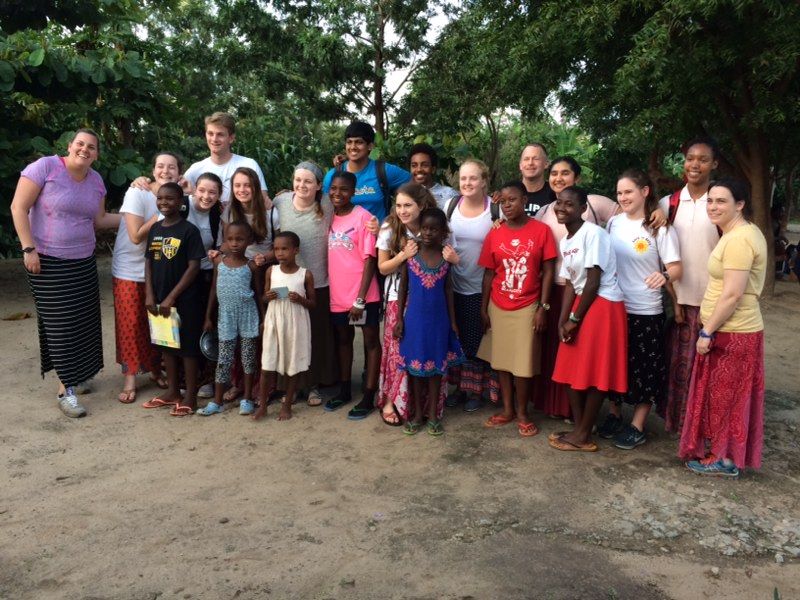 Isabella Geraci (’19) and Sai Dulam (’19) share stories of and reflections on their project rotations. Students are rotating through three projects, and this blog post describes two of the projects: working in the kitchen and with elementary students on an art project.

We are greeted by, as Seth said, the “life of the party.” When Mariana sees us, she stops us and starts moving her shoulders rhythmically and stomping her feet in a welcoming dance. She could not speak a word of English, but her smile said everything. It said we were welcome. It said she was happy to have us here.

The next day we found ourselves back with Mariana on our rotation. For a few days this trip we undergo a rotation where we either work in the kitchen serving food, in the school doing an art project, or in the fields farming. Today, my group did work in the kitchen. Now, by American standards, I am not sure whether or not you would call it a kitchen. Food was served and dishes were washed, yet there was no sink or dishwasher or stove. Only two buckets of murky water for cleaning the dishes and large powerful fires outside with massive pots on top of them. In this kitchen the task seemed pretty simple, we didn’t even have to cook anything. All we had to do was serve the food and wash the dishes, and repeat this process again and again and again. Hours later we would realize just how tiring this work is and the amount of preparation that goes into every single meal.

The first thing we did was serve porridge, then we had to wash all the cups. Mr. Emerson washed the dishes with Mariana, who stopped occasionally to dance. When I decided to join her in dance, everyone started clapping and all the children across the field started watching and giggling – probably because I looked like I had a bug on me! Soon breakfast was over, but there was no time to rest. The cooking for lunch had started hours ago and the serving would soon start. After we served all the children lunch, we ate lunch for ourselves, but the lunch we ate was different. They made us a special lunch with ingredients that the children didn’t get. I thought about this when resting later. We got special lunch because we were guests, but I wondered what it made the children think. Did they think we were above them? I wondered if they realized that we were learning just as much from them as they were learning from us. Finally, at nighttime prayers one girl said, “We are thankful for our visitors.” I realized that they love us because to them we are exciting and different, not above them. To them we are new friends with fun stories. We are people they can learn from, people they can play with, and people that will love them.

“What are the seven colors of the rainbow?” I ask.

“That is only six, what is the last color?” I respond.

The class of first graders erupts with laughter as I correctly tell the little girl the last color of the rainbow, which was violet. The laughter dies down, as the rustle of passing paper is heard around the classroom. I grab a white piece of construction paper and sit down among the kids. A rush of red streaks across the paper, as a long arch forms along the top. The inquisitive children simultaneously grab numerous pastels with various hues of red and orange from the box. The room quickly becomes vibrant with different mixtures of colors. As the last of the students quickly finish drawing the initial arches, the class flies through the other colors. The students readily unleash bright yellows and deep blues next to each other. As my group walks around the classroom assisting kids, squeals of delight erupt from their tiny mouths as their eyes display shimmers of happiness at each other’s rainbows. The children want limited help throughout the project, showcasing their independence and increasing comprehension of the different uses of color in the rainbow and even in nature outside. They realized that this obvious contrast between colors is a pleasure to their eyes while also supporting the main idea of the art lesson, using the many different colors to imitate the work of Henri Matisse. Matisse’s artwork incorporates opposite colors, and he blends them together to create a new image. With this in mind, the children’s many different interpretations of the rainbow are scattered randomly on the page as the colors are misplaced on the paper. However, the accuracy of the individual rainbows does not matter as much as the significance of the art project. The kids are eager to learn new techniques, to keep themselves entertained, while also wanting to help others learn the concept of color differentiation and interaction between various shades of colors.

My group really wanted to encourage the kids to use simple things that anyone can learn, colors in this case, and through the use of all these various techniques, the first graders were able to create their own works of art. These children learned to take what they had and create a new masterpiece, which is applicable to life. However, the teachers, my group in this case, also learned a valuable lesson. We learned to keep an open mind and accept the little things in life that make one happy. And seeing the smiles on the kids’ faces was an added bonus to an entertaining art project.