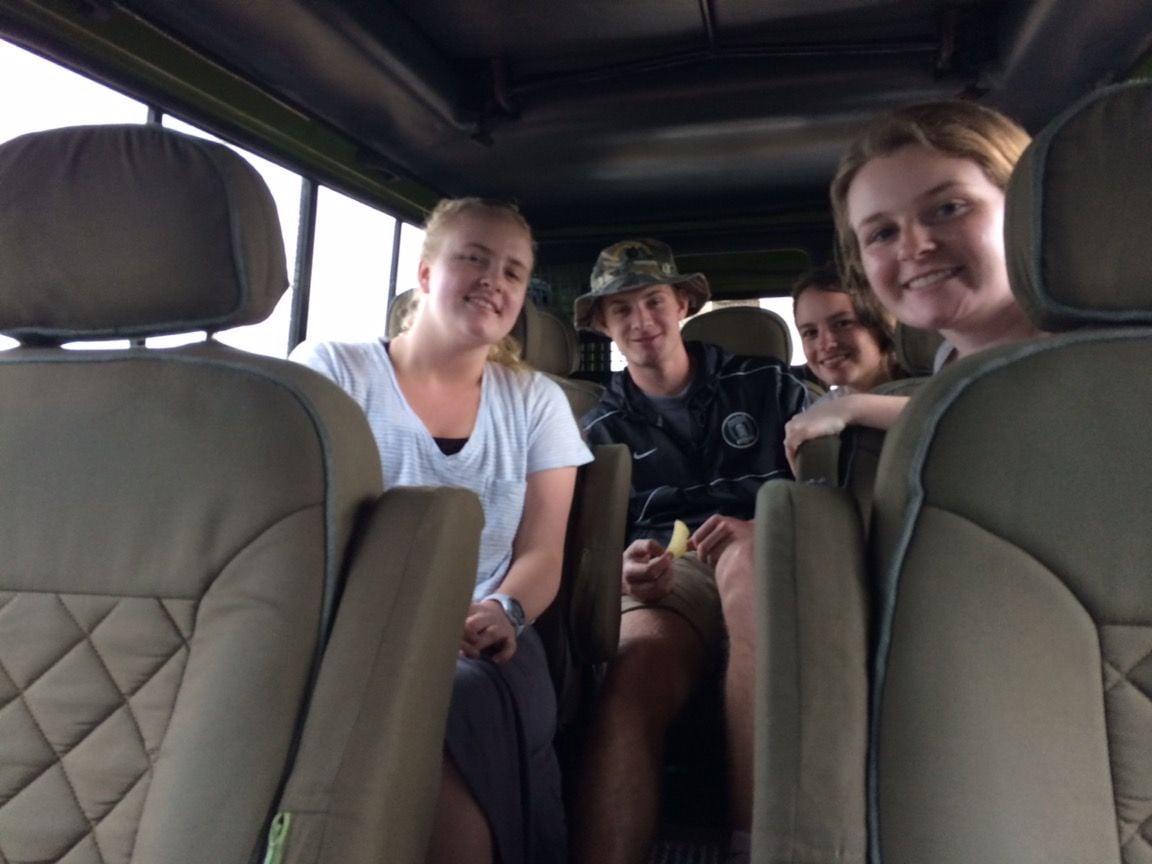 “In Goddy We Trust”

As I settled into my safari van seat, I took in my surroundings, still in awe of the scenery and the untouched nature enveloping us. Even after one long day of crossing the Serengeti and spotting lions, elephants, zebras, and giraffes, it was hard to believe we were coexisting in their natural habitat. Our driver, Goddy, hopped into his seat with a smile stretched across his face. Ready for the day, he quickly turned the jeep around and went down the bumpy path. As we searched for more animals, Goddy drove confidently through ditches, over flooded bridges and past other vans sharing the narrow road. At times I was skeptical, but as our group liked to say, “In Goddy we trust.”

Throughout the ride, Goddy shared interesting facts about animals and the national park, telling descriptive stories of past safaris and revealing parts of Tanzanian culture that I hadn’t known before. He even explained politics and the government system and compared it to America’s. I was not only impressed by his knowledge of everything Serengeti, but also his strong command of English and interest in American culture.

Goddy brought energy and excitement to our safari car. When he heard over his radio that there was a cheetah spotting, he was determined to find it for us, and we set off on a cheetah chase. Rushing down the path, I stood up in the van and let the wind hit my face and whip through my hair. The cool breeze felt nice against my skin, and everywhere I looked was endless Savannah. Resolute to spot the rare animal, Goddy drove miles and miles until we reached the indicated place. Our excitement rose when we saw other safari vans stopped and Goddy smiled to himself, happier to witness our reactions than to see the animal itself.

After we stopped for a quick break, Goddy turned to us and asked, “What do you want to see next?” When we answered with a resounding “lions and elephants,” he responded, “I will find you a lion. I believe we will see elephants.” His confidence and determination impressed me. In our last hour of the safari, after seeing a lone elephant, Goddy slowed the car and turned around to ask us, “what do you see?” We all used binoculars and scanned the plains in search of an animal. Suddenly, I saw something big lying in the shade of an umbrella tree. It was a lion! We quickly spotted his brother lying nearby and stood in awe of their dark manes and beautiful faces. It was amazing to see these huge, majestic creatures so close, and it was the perfect ending to an amazing safari all made possible by our fearless leader, Goddy. 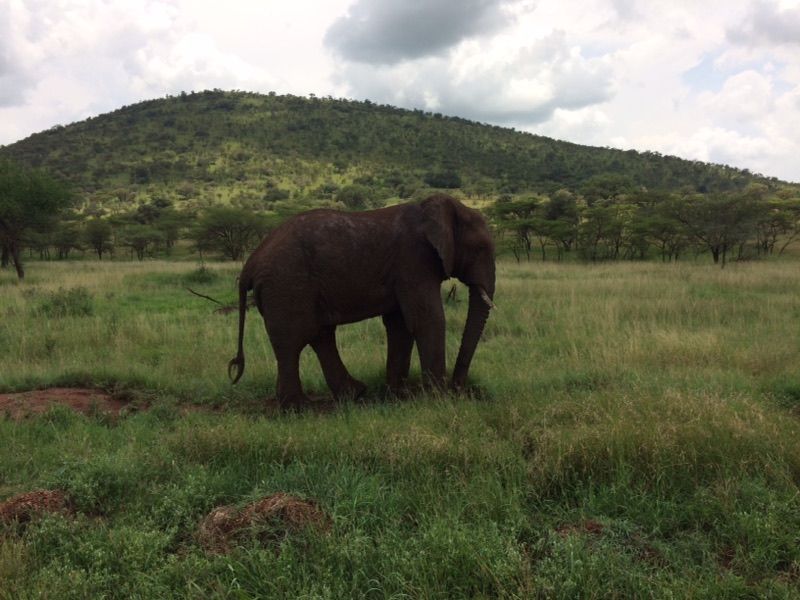 Today was the chase. After an exciting day of seeing practically everything, including elephants, baboons, giraffes and more, we were ready to see some cats, some BIG cats. Leopards, cheetahs and male lions pounced in our dreams. We were told they were the hardest to find. Seth, the JBFC leader, said he had been on safari thirty times with groups and had only seen cheetahs three times. While we hoped we would see them, we knew it would be a long shot. Our van started out very calm; we talked and stayed in our post-breakfast lull, not standing up or expending much energy. Suddenly, the other cars were stopped in front of us. They said they saw a leopard, but our van thought they were joking. We did not see a leopard; we just saw green and brown grass and trees and dirt piles, but no leopard. Jesse, our guide, led our eyes to a meeting of two branches, but we still did not see anything. Finally, through the binoculars, we saw the leopard curled up in the tree; its yellow and brown spots making it almost invisible against the similarly-colored tree.

Seeing the leopard pumped us with adrenaline and suddenly we were standing up, shouting songs at the top of our lungs. Glancing around, we saw plains that seemed endless and we were told by Jesse that Serengeti, the name of the national park, translates to endless plain, incredibly fitting for our current scenery. Trees became sparse, and we could just feel that something was hiding in the tall grass, lurking. It could probably sense us, but we were utterly blind to its presence. Suddenly, over the radio, Jesse heard about a cheetah and we were off. Erin and I started singing the theme song from Titanic as the wing made knots in our hair. It was just like the Titanic, except for the fact that we were not on a boat, or in the ocean. So maybe it was not exactly the same, but the song captured the dramatic effect of our chase for the cheetah. I next sang the Game of Thrones theme song, and Samara joined me in belting out lyrics from Hamilton.

We powered through large puddles like they were a bump in the road. We even saw a bus that had tipped over the week before going across a river, but we were not fazed. Nearing the cheetahs, we saw another car zooming at us. Who would make it first? Who would yield at the intersection? Not us! (Well, in reality, Jesse decided it was us, but we turned right after them and drove to the cheetah.) When we arrived, we marveled at the cheetahs. They were so calm, peaceful. Nothing was around them for miles and miles. It was surprising how close to the road they were. It made me wonder whether or not they were used to human contact, whether or not we were invading their habitat. The cheetahs were exciting to us, but what were we to them? Soon, we were on the road again; the intruders were gone… for today.

Being an animal lover ever since I was a little kid, the chance to actually experience Serengeti National Park in real life was a treat. I was obsessed with Animal Planet, and I would watch it as soon as I could get home from school while also spitting out random facts throughout my conversations. After our first day on safari, my group (Erin, Isabella, Samara, and Mrs. Schloat) achieved limited success with seeing the African big cats: lions, leopards, and cheetahs. I felt like I had to see all three of these animals to make my safari complete. So far throughout our second day, we had only seen plains game such as zebras, topi antelope, and giraffes. However, the desire to see a leopard, who is also the best climbing African cat, burned bright within everyone in our group. We decided to sacrifice our lunch break and eat in the car in order to find this elusive cat. My teeth started to chatter as the bumpy road caused the car to quickly jolt up and down. The cloudy day yielded few bugs as the search was underway. What felt like hours, even though it was only 45 minutes, passed by when our knowledgeable guide, Jesse, suddenly stopped with another 4 safari cars on a rather isolated stretch of road. I shot up out of my seat like a rocket and forced my eyes to rapidly search back and forth along the grass for a few seconds. I did not even know what we were looking for, but then I heard this one word in my right ear:

A sense of doubt overcame me as I could not really believe that this ever-so-elusive cat was sitting right in front of me. However, I still struggled to see it until Jesse pointed out that the cat was casually sitting in a tree. The majestic beast had its head raised in the air and its tail and paws hanging underneath. How any guide was able to see this perfectly camouflaged leopard 300 yards away amazed me. I observed it in its beauty as it just lay there and slept, clearly undisturbed by our presence.

Leaving the leopard in peace, we were on our way to exit the park. My car was satisfied with what we had seen, but we hoped for a male lion. The male lion, considered by many to be lazy and useless for the hunt, was the ultimate prize. However, hope grew slim as we started to leave the center of the park. Heads started dozing off as we passed the endless plains that extended in all directions. Suddenly, Jesse stopped again, and we felt as if something was wrong, but lying before us was the king himself, two of them actually. The elderly brothers looked content under that tree, and the way they stared at me made it feel as if those piercing yellow eyes looked right into my soul. The intimidation factor was real, so after a bit of observing, we left the lazy beasts behind.

However, this was actually not our last animal of the day. As we pulled into the entrance of the park, little monkeys jumped on the cars. As I got out to open the door to the vehicle, I heard a hissing sound from the corner of my eye. As I looked down, this cuddly monkey revealed sharp teeth and started chasing me. I was a little shocked at first, but once I realized that this monkey meant business, I took off around the other side of the car with the monkey following suit. As it sized me up, it realized I was a little too big and ran away. I heard snickering from behind me from my friends, and I joined in with the fun. I realized in that moment that seeing the animals from my childhood dreams was an amazing experience, but the people that I was with made the experience all the more memorable. 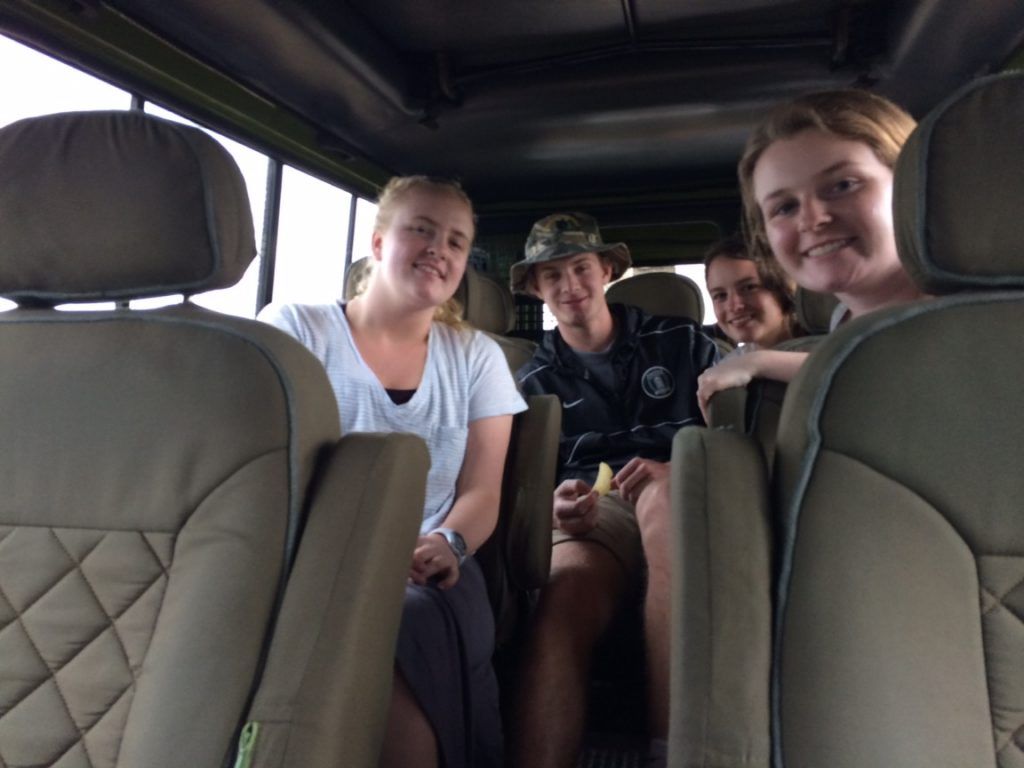