Tanzania #11: Animal Migration and The Meaning of “Karibu” 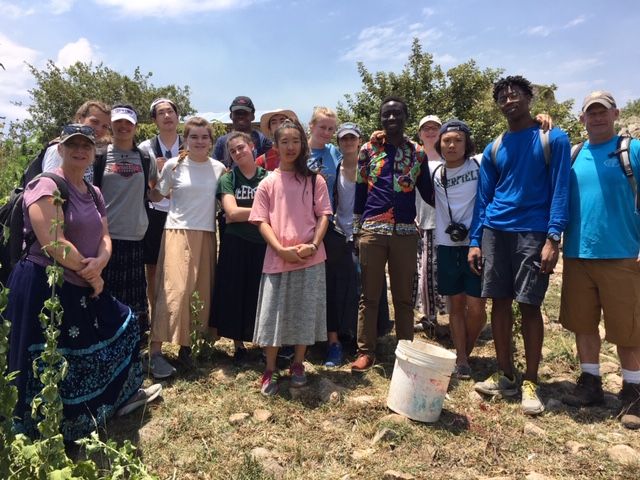 Jeffrey Chen ’19 shares highlights of the groups second day at The Serengeti National Park, and Maddy Sofer ’21 recounts a welcoming return back “home.”

After spending a relaxing night at the Serena Lodge of Serengeti National Park, we set off eastward onto the second half of our two-day safari. Not long after our departure from the lodge, we encountered a group of baboons enjoying their family time by the side of the road. Despite the presence of multiple safari vans surrounding them and the clicking sound of camera shutters, the baboons didn’t seem to be bothered by our short visit. After a quick round of photos, we continued on with our trip through one of the bumpiest paths in the safari, quite literally. Thanks to Edward, our experienced driver, we made it through the valley and entered the elephants’ habitat safely.

As we moved further eastward following the rising horizon, there were fewer and fewer trees in sight, and five minutes later we were left with nothing but a boundless grass plain, a beautifully cleared sky, a refreshing morning breeze, and a curvy road stretching in front of us. Soon, a long file of elephants appeared before our eyes, pacing peacefully towards the river in distance. We lowered our voices and stood on our seats in the van to watch the elephants making their way to their resting place. Everyone seemed to be infected by the elephants’ calm postures and blend into the peaceful scene of nature.

Engines were fired up again when the elephants got out of sight. We started driving south toward the migration location at the eastern corridor of The Serengeti. On our way, we came across several hills that belonged to the lions out on the plain field, who were chilling comfortably in the shades when we spotted them. Edward told us that lions can last three to four days after a successful hunt; I suppose that was not very long ago.

The highlight of our day was when we spectated the migration of zebras and wildebeests, which is considered one of the most well-known migrations in The Serengeti. Every March, thousands of zebras and wildebeests would form an enormous herd to travel from the southern part of The Serengeti to the northern border of Tanzania with their new-born babies; and by the time they arrive at the north in mating season around June, their babies would be old enough to mate; and eventually the zebras and the wildebeests would head back at the end of the mating season to have their babies back in The Serengeti. As to why the two species would collaborate, nature says that zebras know the route to the northern border, and massive packs of wildebeests would make zebras’ travelling much safer.

As I stood quietly in the cross-country vehicle and watched groups of zebras and wildebeests getting started on their annual journey, I was impressed by how every member that The Serengeti houses has its own way of life away from human interventions. Whether it was the two baby baboons that were wrestling on the side of the road, or the sleepy lion that shied away from our cameras, or the vigilant zebra that stared at our van the entire time, they are all a part of a sustainable system. This safari experience has not only led me to observe the harmonious relationship between the wild animals in The Serengeti and the nature that breeds every one of us on earth, it has also reminded me the essential role of natural rule that plays in our own world. 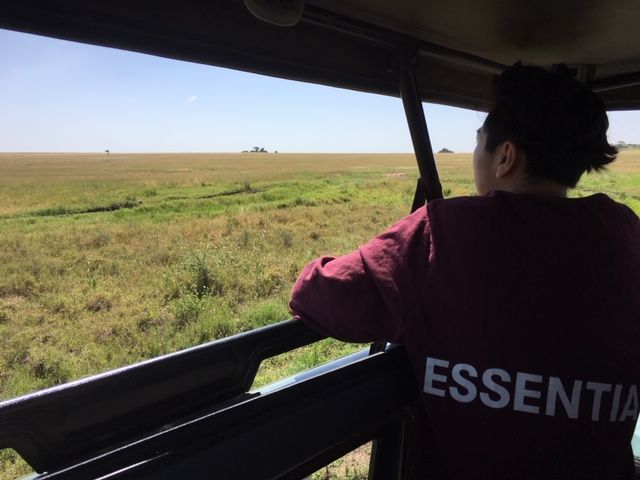 Through the dusty window of the safari car, the now-familiar sights of the school and girls’ home reappeared as we entered the Mainsprings campus. The two-day safari was an incredibly relaxing and rejuvenating experience with modern luxuries that we do not get to experience here in Kitongo. As we sped away from the hotel this morning, I felt as though we were leaving a modern life that I had quickly adapted back to. We were all sad to leave the hot showers, buffets, and comfortable beds that the hotel provided us.

However, I found myself surprised by my eagerness and joy upon returning. I had spent almost two whole days in the car among my four peers, Dr. Hooker, as well as our knowledgeable driver, Edward. We had talked, sang, played cards, and seen numerous animals together. Now returning to the Mainsprings campus, I spotted the cement buildings and glittering lake. We were greeted by many hugs and warm welcomes as we unloaded our belongings and brought them back into the guest house.

One resonating phrase we often hear at Mainsprings is “karibu”, which means “feel at home.” I think of home as a place where I feel welcomed and loved; places such as where I grew up and the Deerfield campus. Arriving back in Kitongo, I finally felt back at home. The girls with their inclusive and friendly personalities were infinitely more welcoming than any luxury that a hotel could provide.

The girls here at JBFC and this trip as a whole have taught me so many lessons, but the most important thing I’ve learned is that any place can feel like home, even if it is nearly 8,000 miles away.