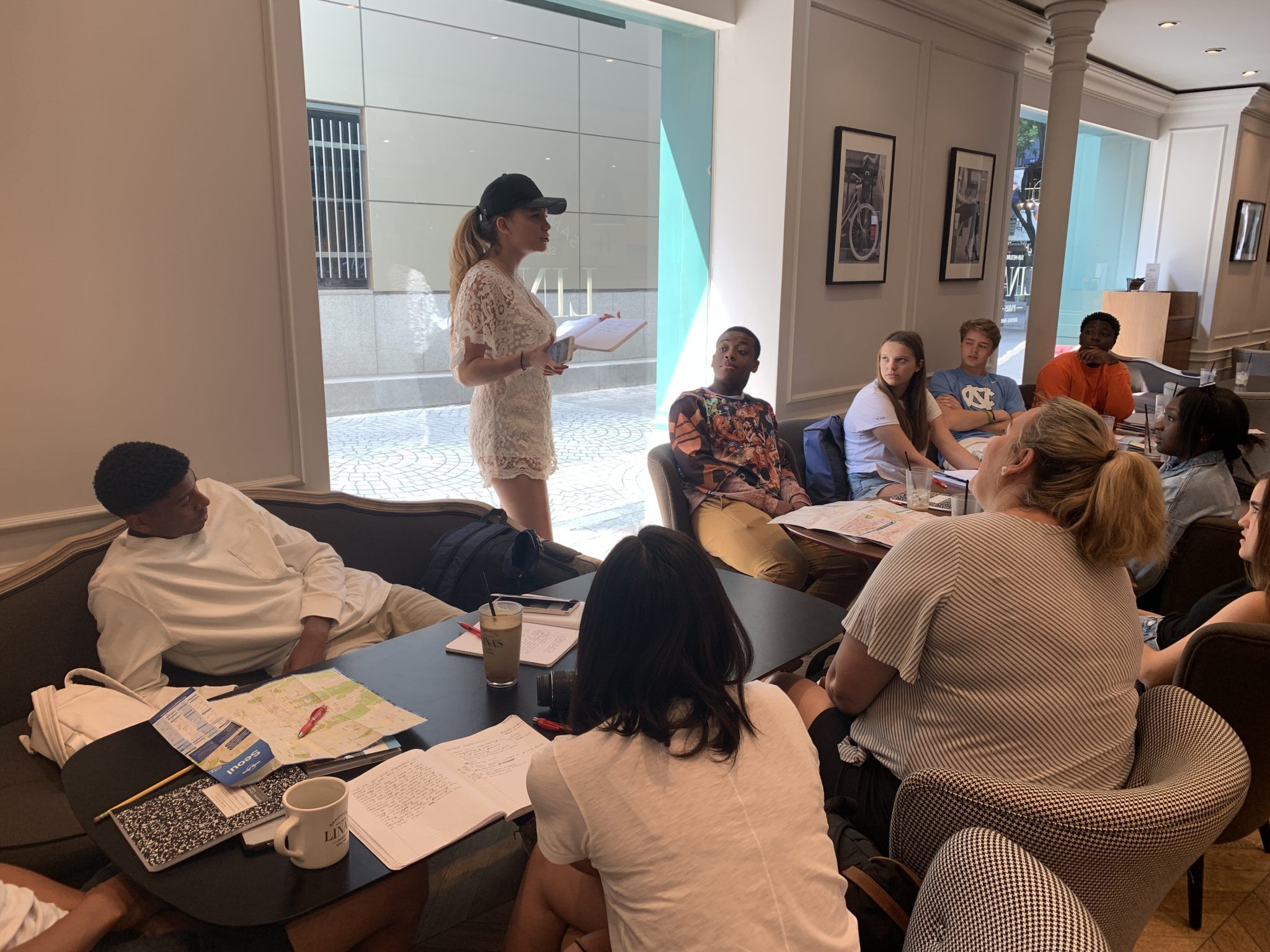 Wilona Wiafe ’21 reflects on the meaning of leadership, and Alice Hryhorovych ’20 recounts a busy first day in Seoul.

“Deerfield Academy prepares students for leadership in a rapidly changing world.” This is a phrase that is immediately seen at the top of Deerfield Academy’s mission statement. Yet, I have always wondered: How does Deerfield manage to prepare 600 students to become leaders?

Sunday, June 16th. 1:45 pm. Students and faculty on the trip have gathered at the Jogyesa Temple in Seoul. Felipe, one of our tour guides with Envoys, asked students to share one of our three goals for the trip. Immediately, my mind went to leadership. I knew if I took nothing away from this trip, I wanted to at least come back with one new method for becoming a better leader.

Leadership in context to the United States is significantly different than the rest of the world. Already, on my first day in South Korea, I have seen leadership in a different light. Although I have not been here very long, I have gained a sense of the culture in South Korea. Based on the people I have been around, I have noticed that Koreans believe good leaders must be approachable. Walking around Insadong, I noticed a sense of warmness among the people. Despite the obvious language barrier, whenever I approached someone in the market, I recognized that a quality that must have been instilled in South Koreans at a young age is kindness. Their kindness makes them extremely approachable. Leaders must be empathetic. One who wants to become a leader must understand those they are leading. Lack of understanding between leaders and their people is one of the fundamental reasons for why countries fail. If we all gain the ability to empathize, we can make the world a better place. Deerfield is preparing me to be the best leader I can be by granting me this amazing opportunity to travel to South Korea, and I am so excited for the rest of the trip! 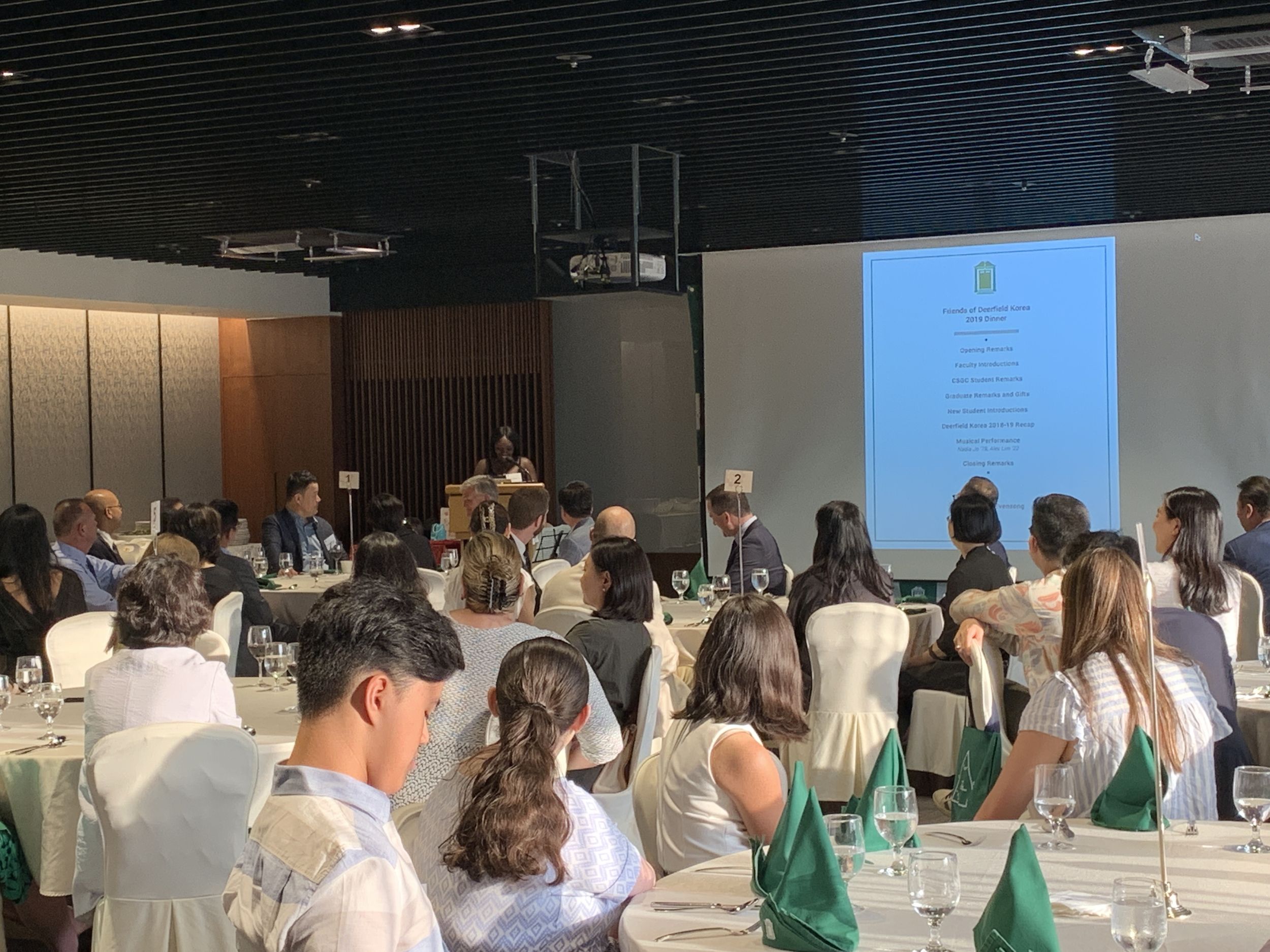 Surprisingly, not many of us were falling asleep or jet lagged even though the US is 13 hours behind. When I say surprisingly not asleep, I mean that if we could sleep and walk at the same time we would, but June 16th was a non-stop adventure with little time to even think about rest.

Full of energy, we met 15 Deerfield faculty members who were on a professional development trip in Asia and went to the Hanok village where we all got introduced to some Korean traditions. Surrounded by the traditional houses which were the defining elements of the village, we took part in a Korean Arts and Crafts lesson. Throughout our experience in the village we learned more about Korean mythology and the ways people used it to represent certain virtues and values. We had a chance to choose one of four mythical animals that were meant to protect the king in the four cardinal directions to create a bag or a T-shirt. Proud of our accomplishments (read “a failure to not get paint over the lines of a sketch”), we headed down the village streets (considering renting the 7$ Korean dresses to take pictures).

The day continued with a visit to a Korean restaurant; even though Korean food is very different from what we are typically used to, we diligently cut the meat with a spoon and stabbed dumplings with chopsticks. While having fun doing scavenger hunts prepared by two student groups after lunch, we also learned about Buddhism, visited a temple, explored the narrow streets of the Insadong Market, and watched a Korean martial arts show.

Language barrier, however, accompanied all of our adventures. Here is a transcription of our attempt to purchase a scarf in the market:

So after such an exhausting day, we couldn’t be happier to have a dinner hosted by Friends of Deerfield Korea. Parents, alumni, new students, and our group all had a great time sharing our experience in Korea, meeting friends who graduated, welcoming two rising 9th graders, and singing the Deerfield Even Song.

A great day behind and many more adventures ahead! 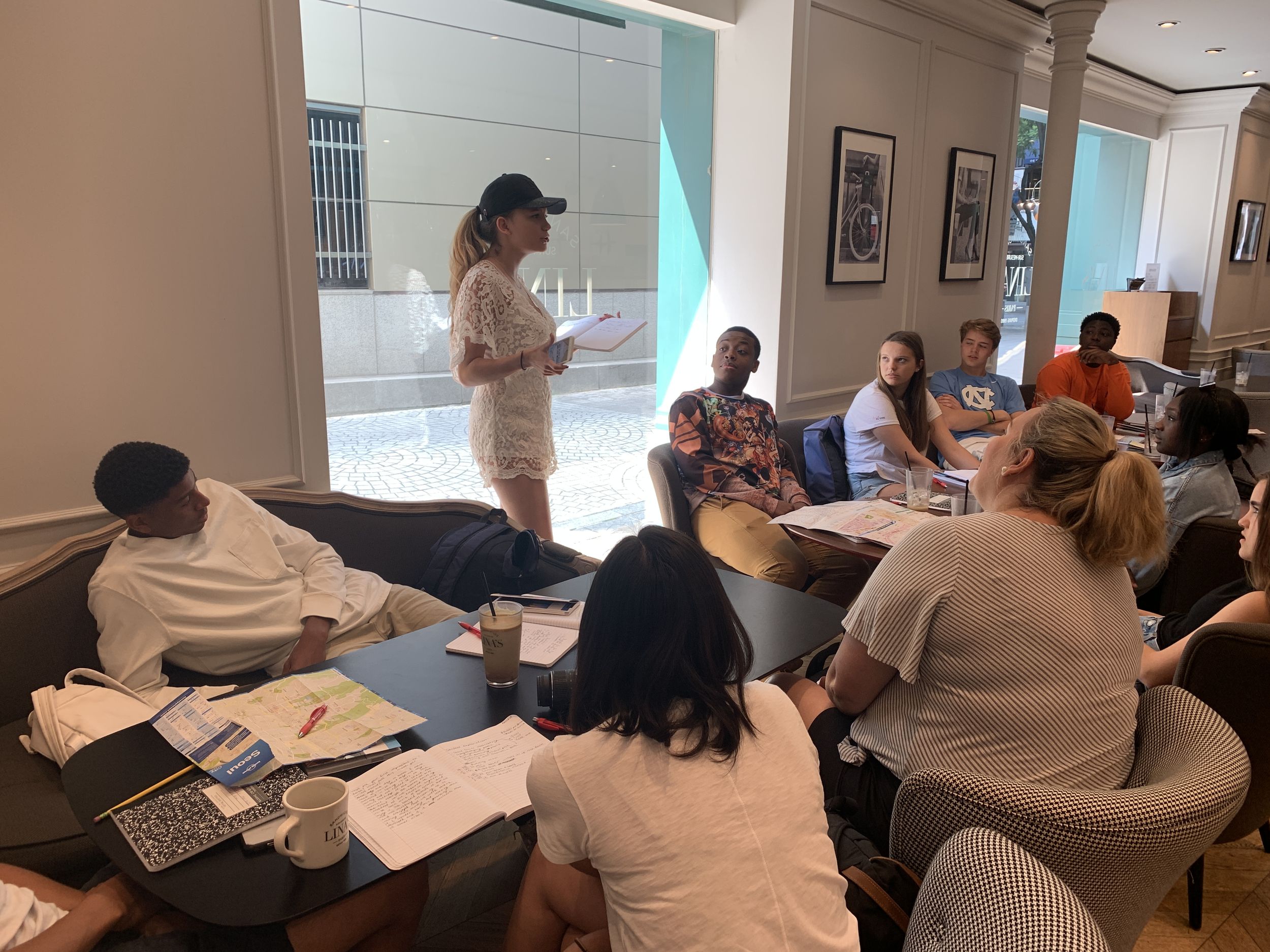 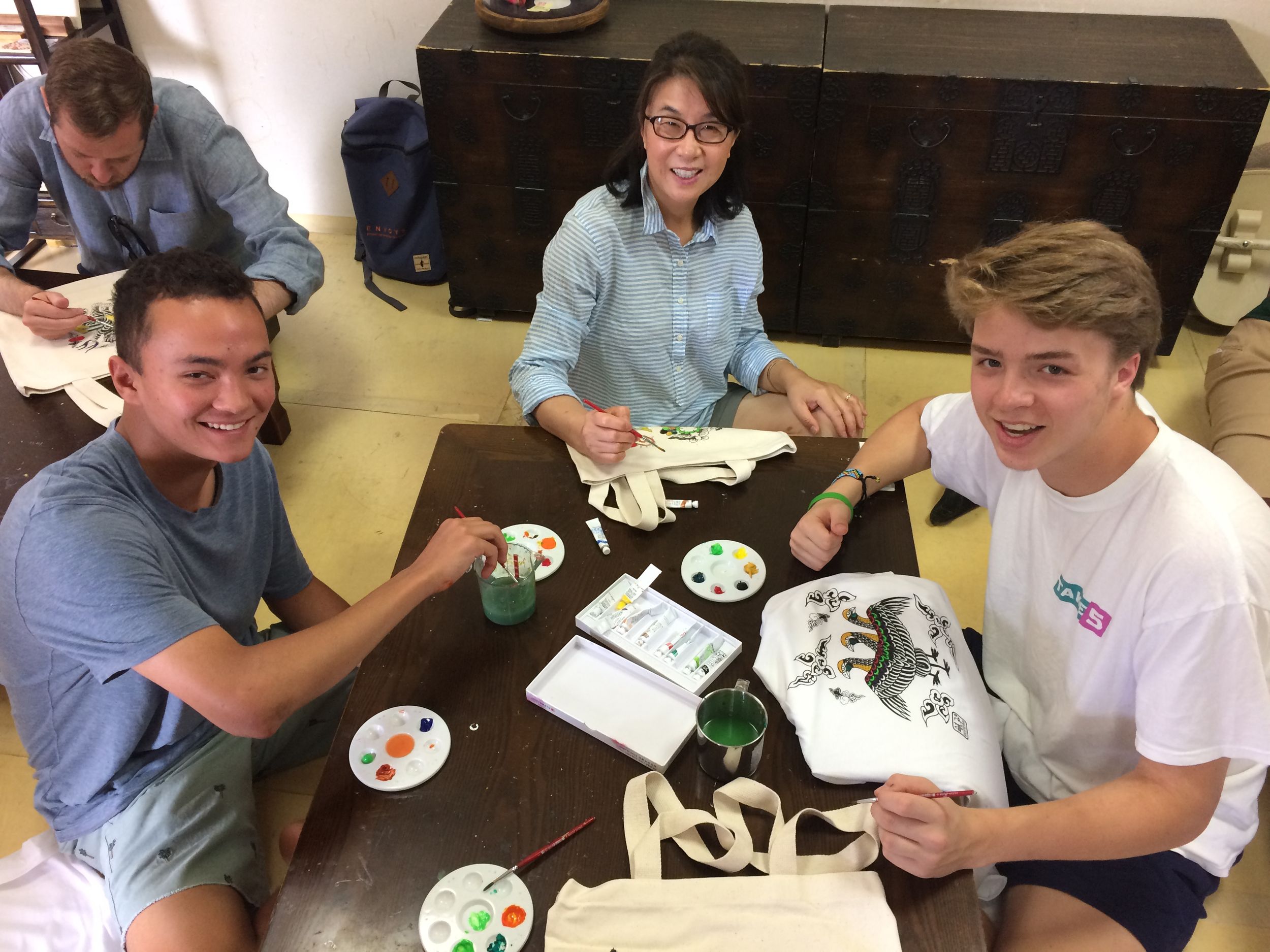 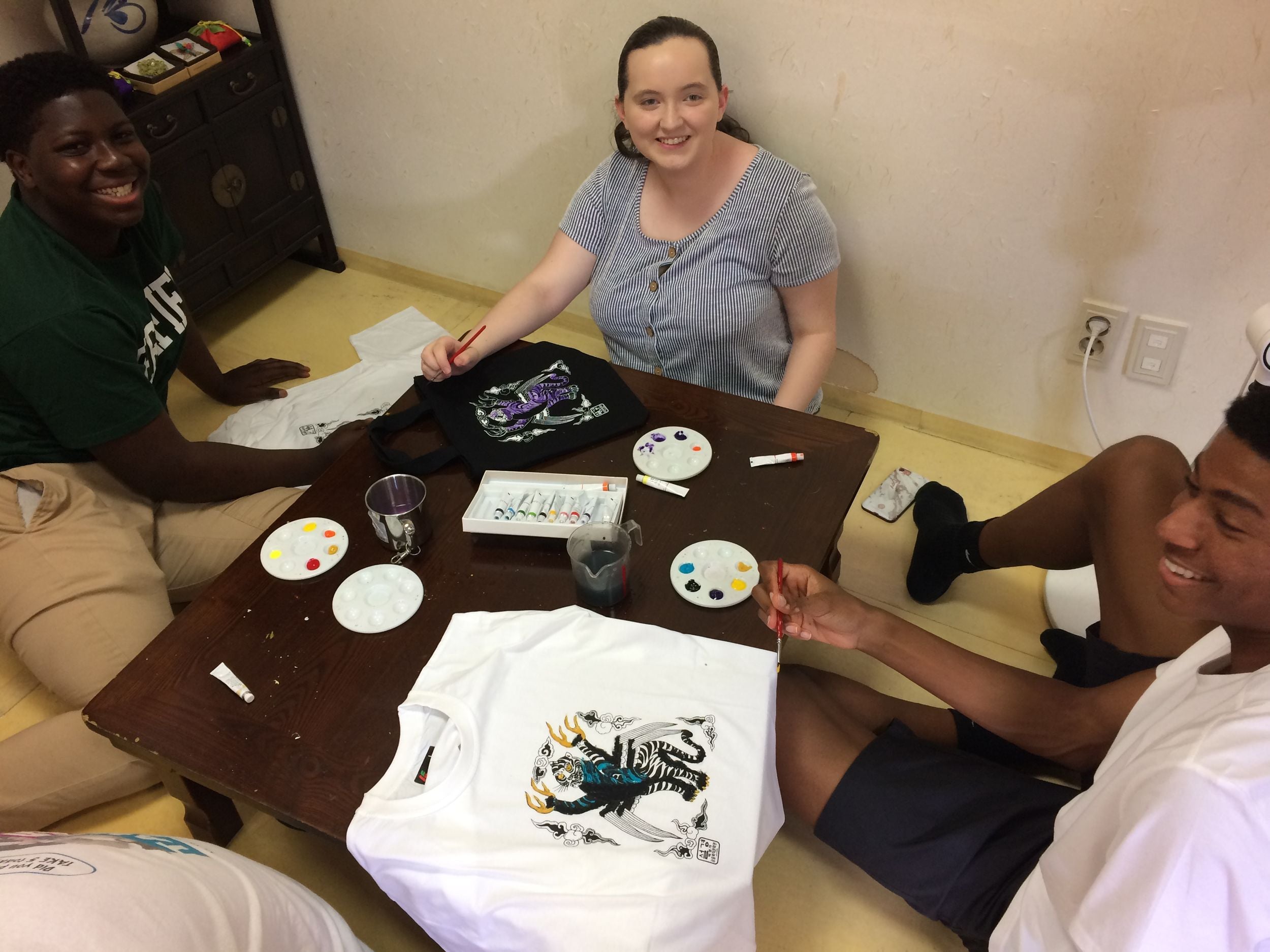 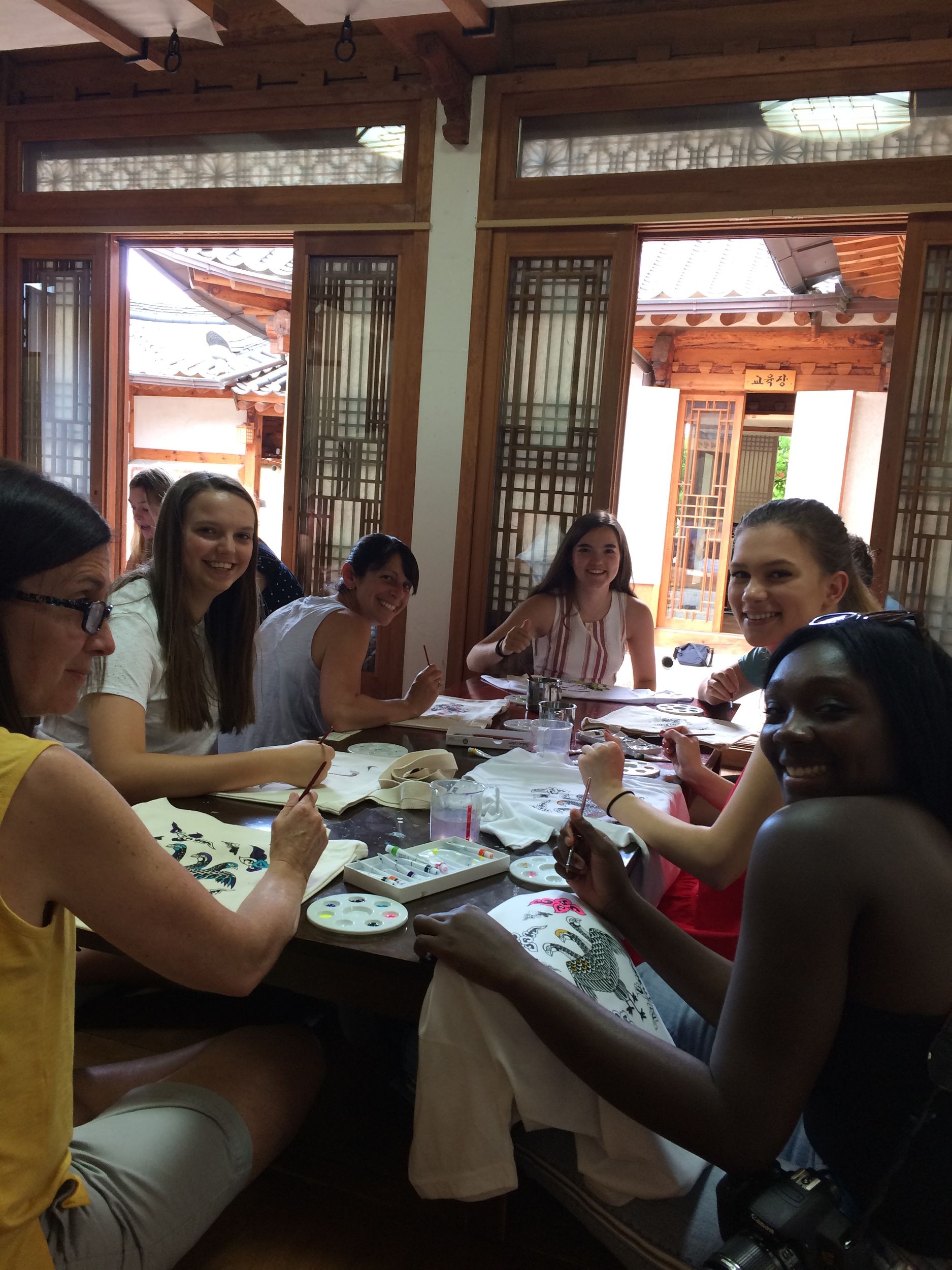 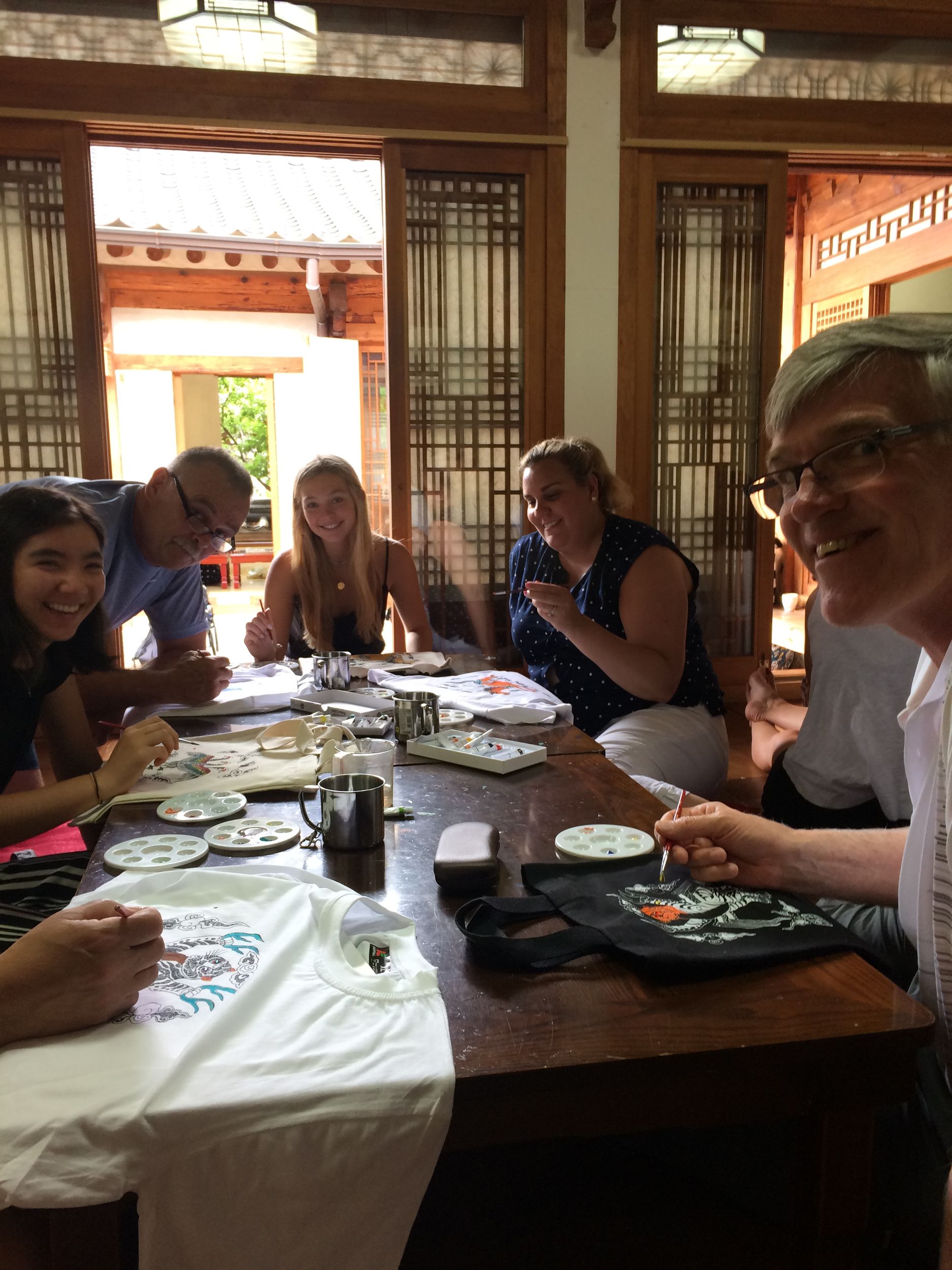 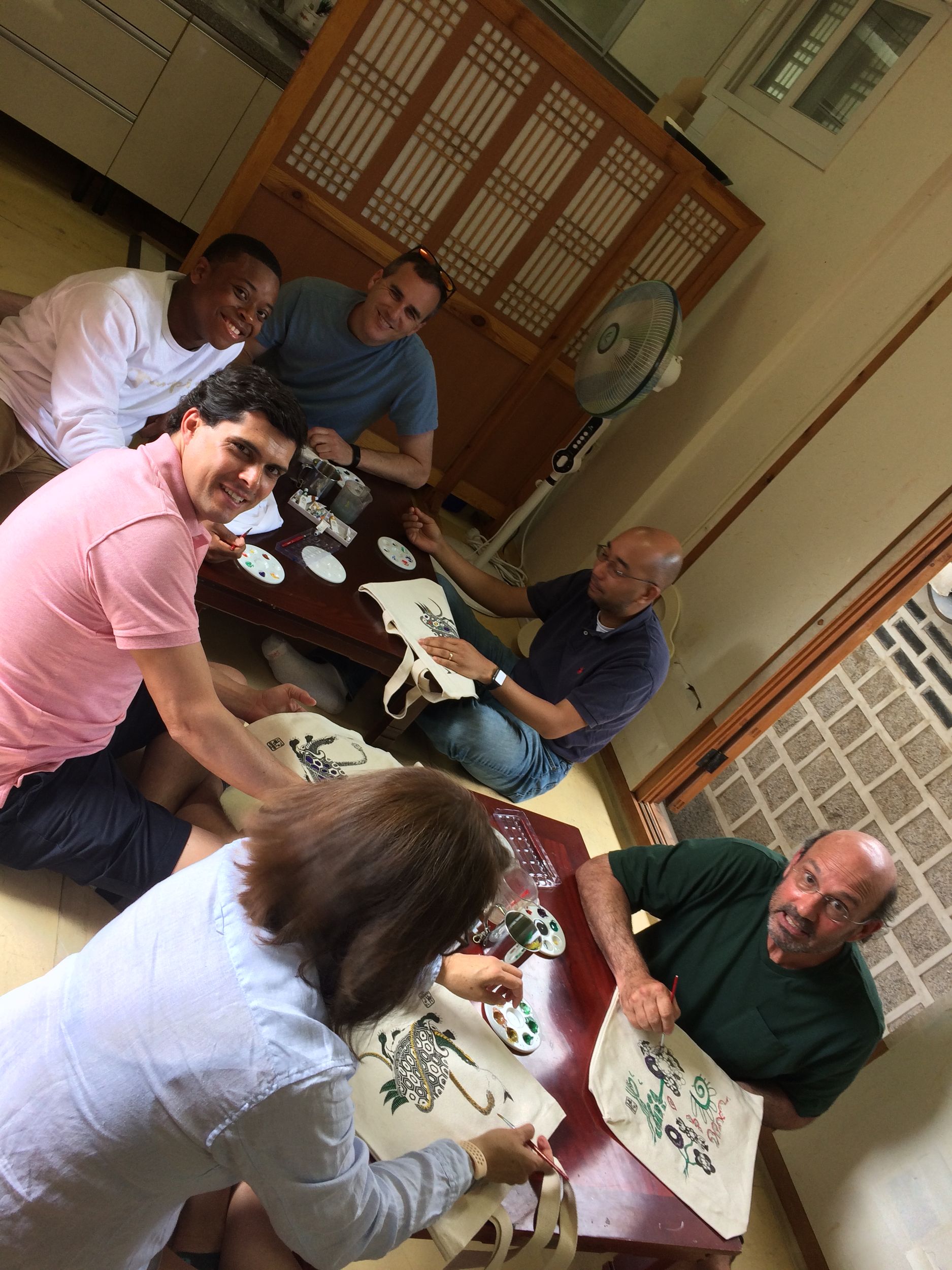 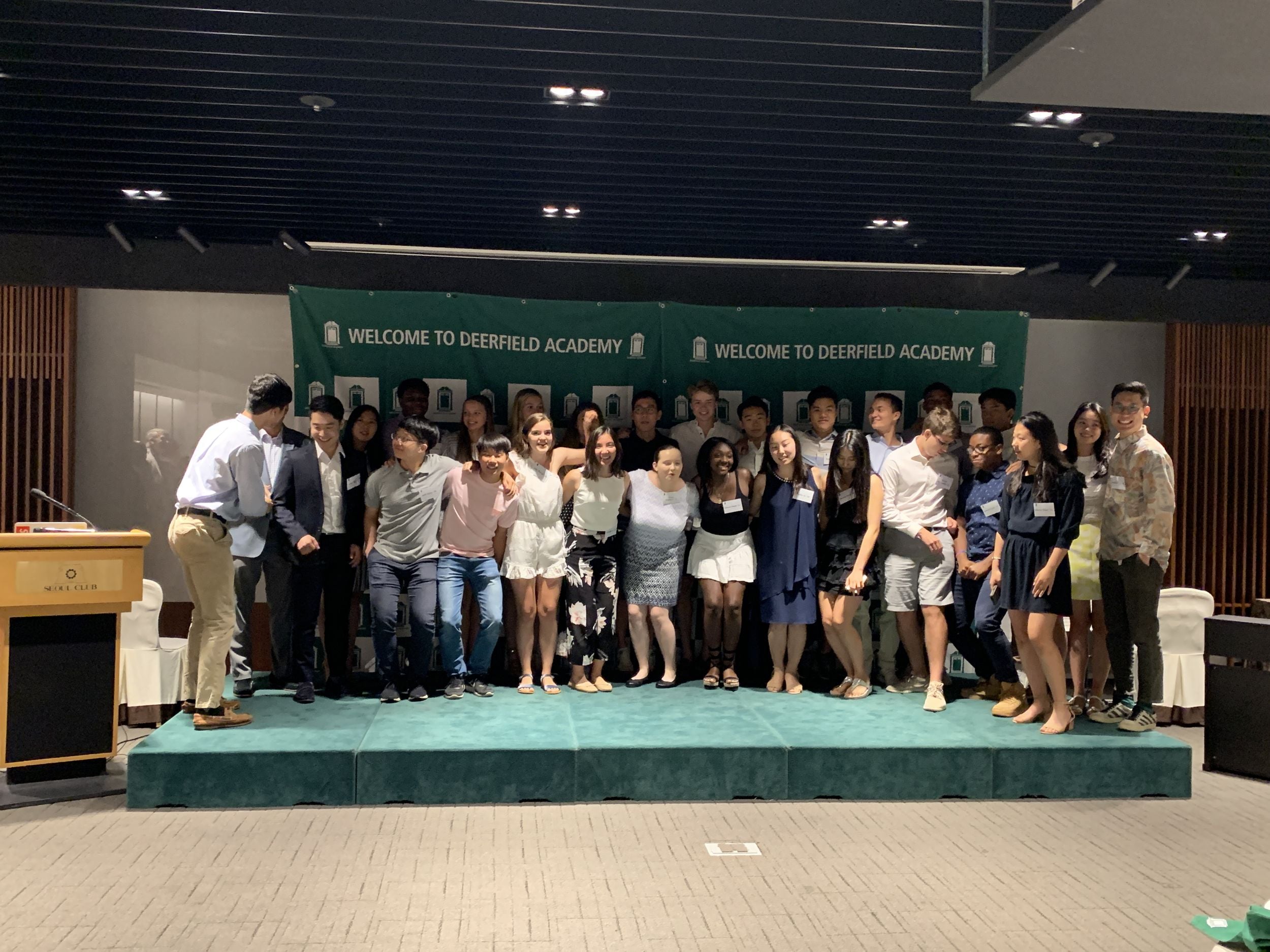 Click here for more pictures of the South Korea trip! 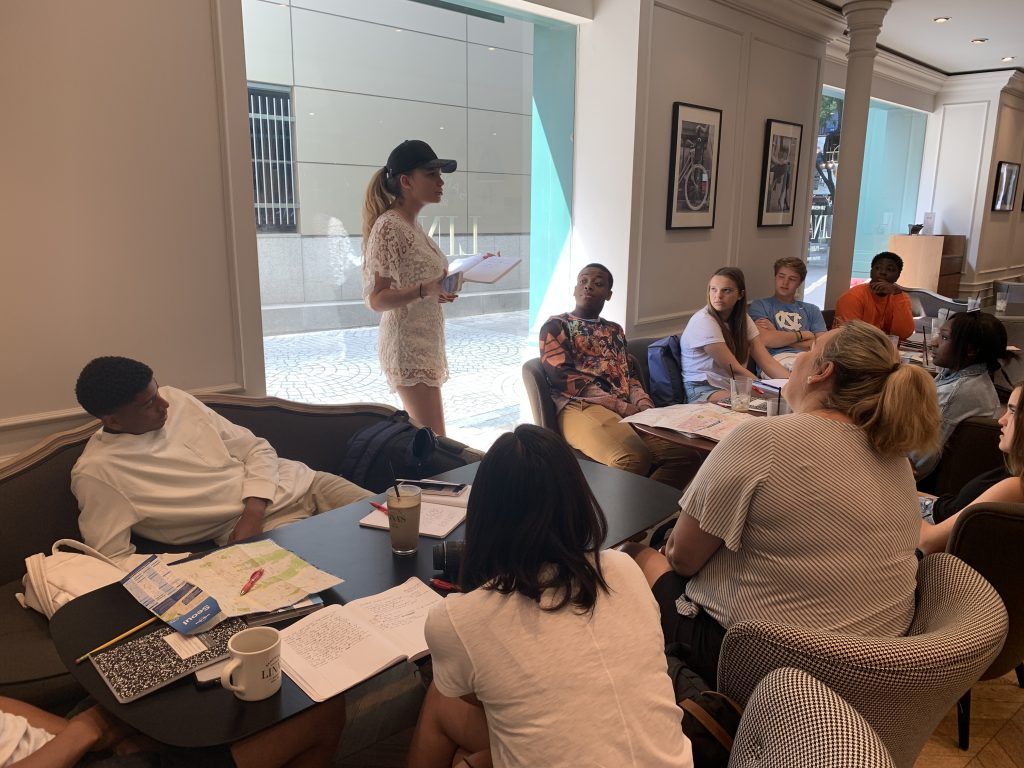