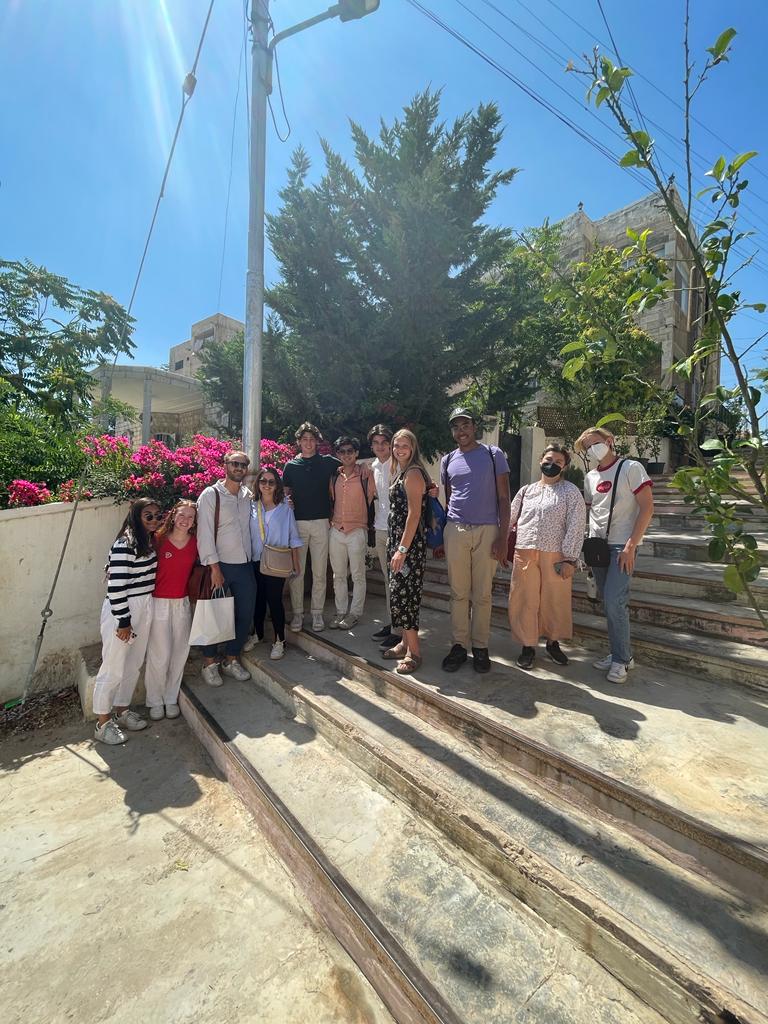 Aviel Alexander ’25 and Isabelle Schwartz ’24, describe their day visiting with a local artist and cooking a traditional Jordanian dish at Beit Sitti.

After our adventures all across the wondrous country of Jordan, a supposedly calmer day in the capital city of Amman was well received. A long day yesterday called for more sleep, so 9:00am was the time that we set out for what was set for us in the beautifully hilly city. When we stepped out of the bus, we were facing the workshop of local artist: Hussein. As we filed into the said workshop, different pieces of art adorned the walls.

This was art like no other, for it wasn’t just images depicting a scenario or an emotion, but words; they were forms of Arabic calligraphy, something that Hussein taught us about in his workshop. With a very informative slideshow, we learned facts and fascinating history about the Arabic alphabet, the English alphabet, and the inherent artistic qualities of the Arabic writing system. He also showed us that he was a graphic designer and calligrapher himself and showed us examples of his work. After his slideshow, he took us into the larger room in his workshop and we were able to see even more of his art pieces from a piece with the Arabic alphabet based on Chinese calligraphy as well as a piece with the Arabic word for forbidden: mamnue (ممنوع) with what seemed to have pop art inspiration. In a few minutes, breakfast arrived and it was a selection of different cheese breads as well as biscuits and croissants. After the quite filling breakfast, we made our way back to the previous room so that we could learn more about how Hussein’s made his pieces.

There were many tools that he took out to show us what could be used in calligraphy. There was a bamboo tool, a brush, and a wooden spoon, proving that we can even use kitchen utensils to draw calligraphy. After a showcase of his calligraphic abilities, he made each of our names using said abilities. His technique using a marker to make the contrast between the thick lines of some parts of characters and the thin lines that were used to connect letters was exquisite, so much so that I’m not fully sure how to put it into words. Soon after our souvenirs were made, we set out to see the rest of Weibdeh, the portion of creative and cool Amman we were in.

We traveled up and down the hill Weibdeh rested upon, seeing many different sights such as some aesthetically pleasing and stores that differed from the ones we have seen up onto this point, such as Dot. Sugar. After a trip down a staircase, we made our way to one of our main stops in Weibdeh, Darat al Funun.

Darat al Funun is an art gallery made of many different houses all owned by the same family so that art exhibitions and other installations can be shown to the people of Jordan and beyond. The current exhibit in the gallery was called Re-rooting, which displayed depictions of the lands of Jordan relating to its state of living, as well as its food. I found part of the exhibit on the food of Jordan especially interesting, because it wasn’t just talking about what was being grown in, as well as in the places around, Jordan, but talking about what was currently happening to the crops mentioned. An example is Jordanian wheat, which is being grown significantly less in the present day because of the wheat and flour being imported from other countries such as the USA. The funny thing is that the US thought that they were helping the people of Jordan when in fact they were stopping the growth of a fundamental crop of the Jordanians. This was because the US was sending a cheaper, more processed version of wheat which the Jordanian wheat farmers couldn’t compete with.

While the art gallery was eye-opening in more ways than one, we all knew that a break was to be in order, so we headed to a café. 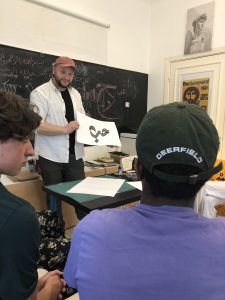 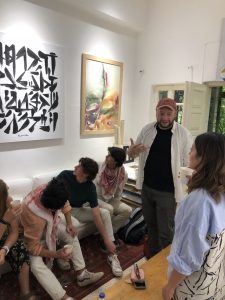 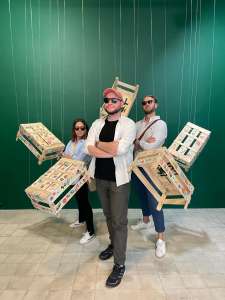 We took a quick break from the sun in a beautiful and modern café owned by a friend of Ms. Samawi called Manara. There I got a fresh pomegranate kiwi juice, and enjoyed the view of downtown Amman from the balcony with my fellow Deerfield trip mates.

Then, we headed to Beit Sitti for our cooking class dinner. Founded by the great grandmother of our chef, and located in the arts and cultural district of Amman, Beit sitti translates to “grandmothers house.” Beit Sitti is stone-filled and adorned with flowers. It was the most beautiful place to learn to cook maqloubeh, a Jordanian dish made of chicken, rice, cauliflower, and a plethora of spices. The main spice added was Jordanian spice mix, a rich mix of spices found at the local market. We were instructed as well as to how to make this dish at home, substituting things like angel hair for the stringy dough, and why vegetable oil was better than olive oil for this dish. My job was to roast the eggplants for the matabbel, the Jordanian name for Baba Ghanoush. The goal was to get all sides of the eggplant to have a flaky crispy texture. I would say it turned out pretty well!

To make the matabbel, tahini, yoghurt, vegetable oil, and our roasted eggplant was mixed together. We ended up with a medium consistency, creamy and delicious dip. Next, we made a garden salad, and were instructed on how to properly cut vegetables such as mint, tomatoes, and cucumbers. This was probably the most fun part as we all felt like we were on a cooking show! After making our desert, kanafeh, and our little breads (which Lukenine excelled at smashing!) , we flipped the maqloubeh. Aviel did an amazing job with this, holding it steady until the pivotal moment, and finishing with a clean flip. We all applauded, still reeling from the power of this magical moment.

Dinner commenced, and the food tasted so much better with the knowledge that we made it ourselves. We all took a really good nap on the bus ride back.

Arabic food was one of my favorites before the trip, after coming to Jordan, I have appreciated it so much more. The falafel is more crisp, the salads more fresh, and everything tastes more vibrant. The flavors of Arabic food have a great complexity yet making the dishes were quite simple. Learning the specific spices like all spice, cumin, and turmeric as well as the ingredients used was an enlightening and value able experience for us all. I’m so grateful for the opportunity to come to Jordan and immerse myself in all of the culture, and today specifically, the food. 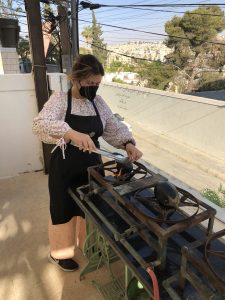 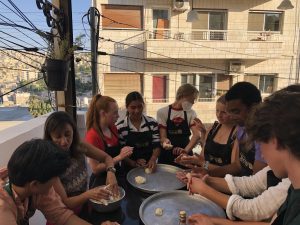 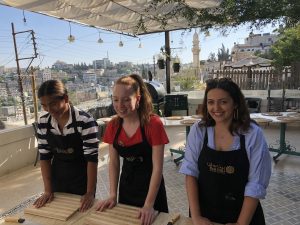 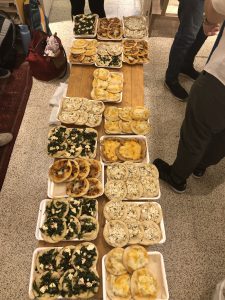