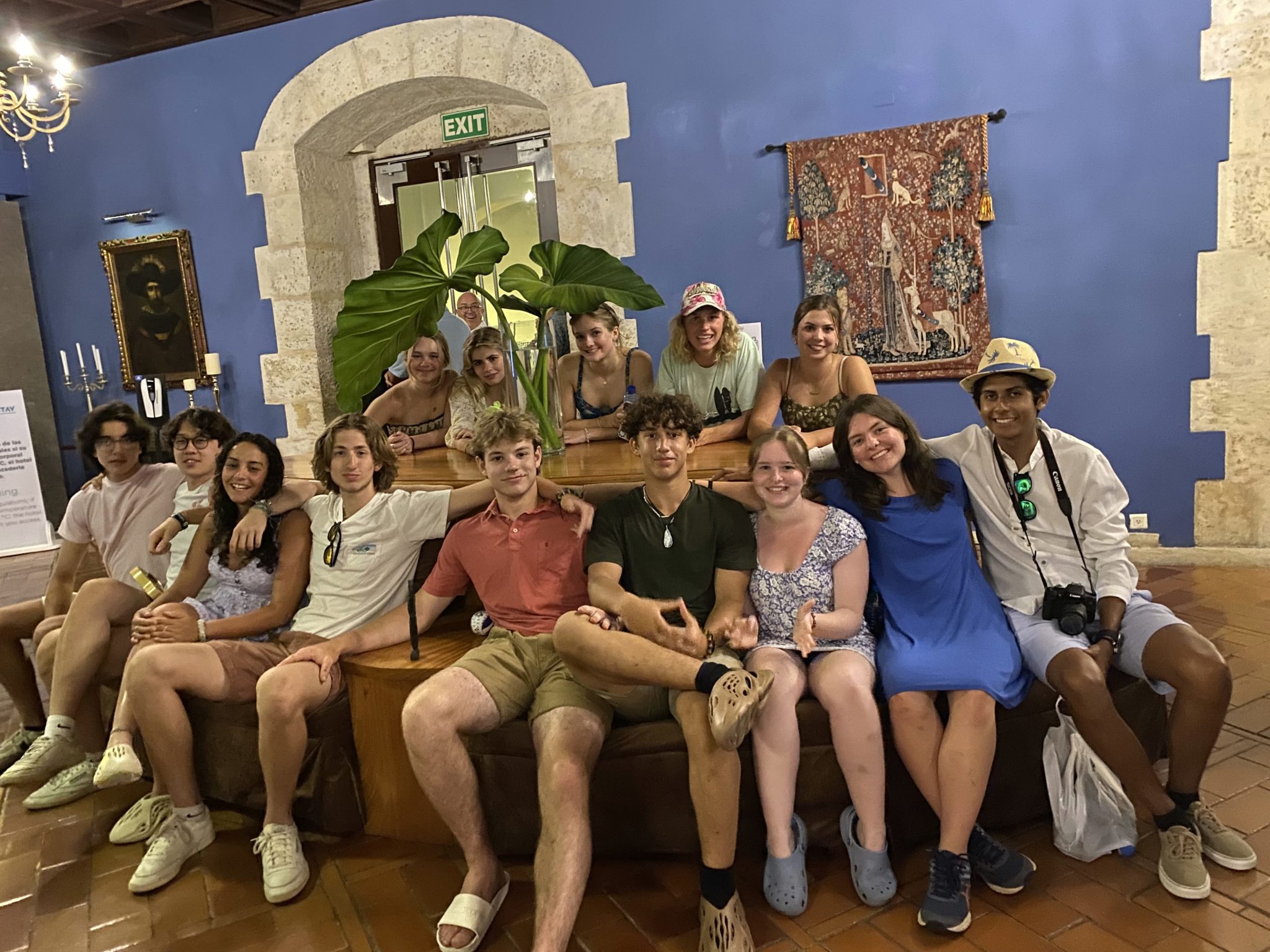 Today, the group traveled from San Juan, the site of the build, to Santo Domingo, both our place of departure and the capital of the Dominican Republic. After an almost four hour bus ride, we arrived in the city. With a few hours to spare, the group split up to explore a popular street in Santo Domingo which started at the water and stretched across numerous blocks. I was awestruck by the beautiful architecture as it resembled that of the Spanish. Beautiful buildings, both old and new, lined the streets as a beautiful sight for all passers by. After dark, the group walked along the water to observe and learn about some of the older buildings from the Columbian era. The beauty of the grand architecture and buildings that seemed to be remarkable and admirable feats of their time were now tainted with the knowledge of those who resided in them; those of Columbus and his men who committed genocide upon the people of this country. It became harder to admire the beauty and grandiosity as my mind instead began to focus on the horrors that occurred on these lands during the late 15th and early 16th centuries.

After dinner, we learned that the hotel we ate at used to belong to Columbus’ brother as a center for the Spaniards. When I first walked into the hotel, every group member seemed to marvel in its sight. None of us knew the darker history behind it, and what shocked me more, was that none of us had even stopped to think about the origins of this building. It was obviously old, and we all knew the horror stories of Columbus and his men, so why didn’t we question or inquire about this hotel? We were simply captivated by the outward appearance, and forgot to think critically. Nonetheless, learning about these harrowingly beautiful structures spread across the waterfront was both educational and engaging. The warm night breeze comforted us as we made our way around town with Jose’s kind teachings. I am so glad we were taught about the history behind the buildings that make up Santo Domingo, as it deepened my appreciation for this city, all that stands behind it, and all that it will stand for in perpetuity. 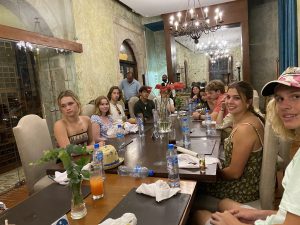 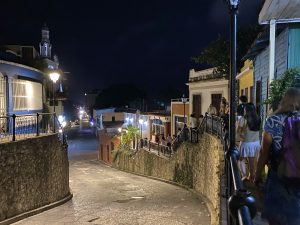 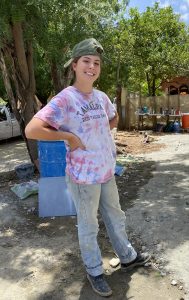 Jose Abreu, founder of Cambiando Vidas, repeatedly says “there are no goodbyes, just long see you laters.” Following a wonderful and fulfilling fiesta held in the Carlos family newly constructed home, we arose early in the morning to begin our final day in the DR. On our way from San Juan to Santo Domingo, we made our “final” stop by the house. There, we were reminded of Jose’s catch phrase, with the culmination of this past week’s work ending in a short but emboldened hasta luego.

The latter portion of the day was filled with travel and an enlightening afternoon in Santo Domingo. Not only did we explore Santo Domingo’s vividly rich history, walking past the first hospital built in the “New World” but we also mingled with locals, bartering for goods. After honing my Spanish speaking skills by haggling for lower prices with store owners and street vendors, I found myself in the middle of the street, playing chess against locals for 2 hours. That chess board served as a magnet for the community as well as other travelers.

Through chess, I met a teacher from a Colorado school on a similar Community Service trip, as well as a group on a missionary trip. As for locals, I played against four of them at once. I’m proud to say that I only lost once during my time balancing the board on both my and my opponents’ knees. This makeshift setup served as the playing field for playful banter and an exchange of culture. I was quickly dubbed Americano. Although I was jealous to see the four men collaborating against me, it warmed my heart to see them bind together as a community in the downfall of the Americano.

This sentiment of unity was displayed throughout the DR as every member of the Las Charcas (the town of the build) community aided in the construction of the house. I hope to take the anecdotal lessons I gathered here back to the US. And so, with a smile on my face and tears in my eyes, see you later/hasta luego DR. 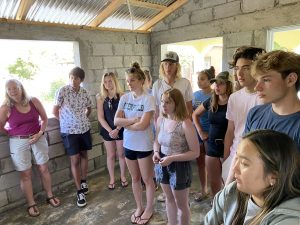 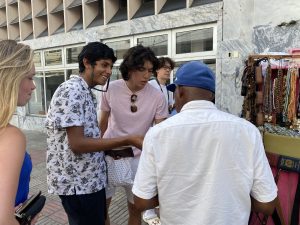 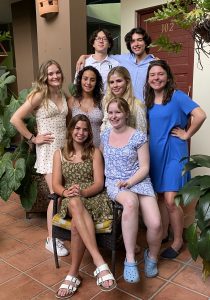 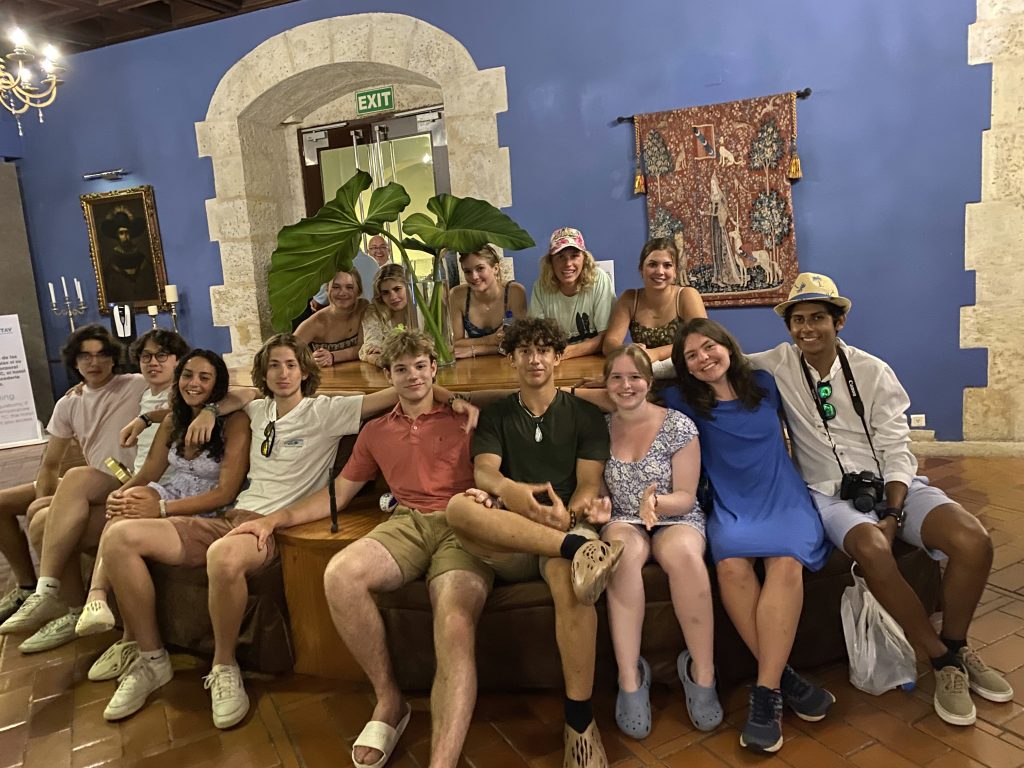