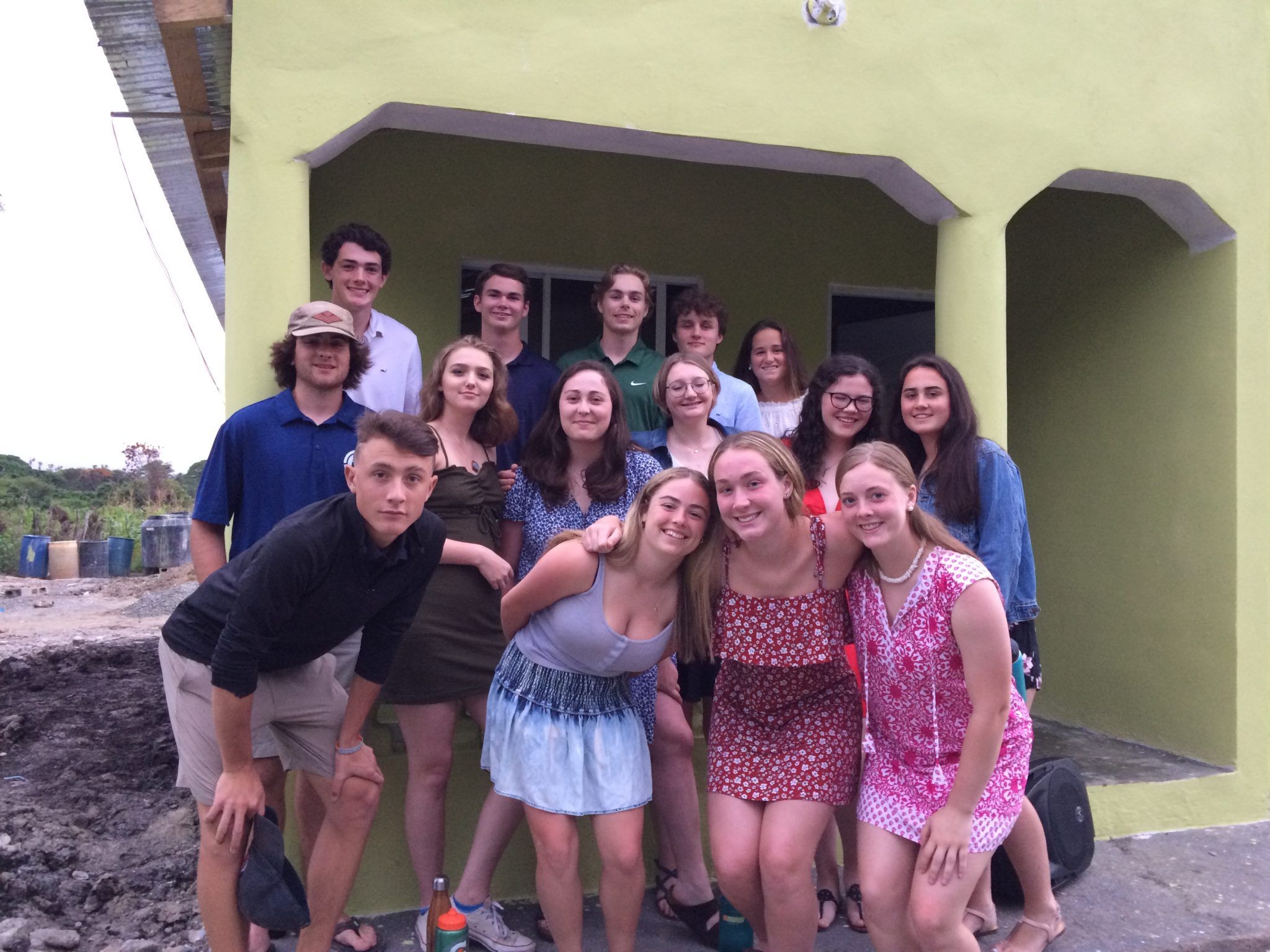 Garret DeMallie ’21, Connor Guest ’20, and Francis Gannon Jr. ’21 describe the “meaningful” connections they’ve made within the community and the “life lessons” they’ve learned during their time in the DR.

Garret:
In the past week, I have experienced how easy it is to make connections. Even after completing my third level of Spanish, I feel silly talking to the small children at the work site. But through hand motions, my classmate’s translations, and a bunch of guessing, I was able to have fun and meaningful conversations with the locals.

While waiting for a truck of kids to return, the rest of us sat on the back patio admiring the work we had complete. Then, three of the children peeked over the corner to have a chat. They sat next to us, smiling as usual, intrigued by our hats. One of the children picked mine right off and plopped it on his head. He repeated, “Sombrero” over and over, pointing at my hat each time. We both had a chuckle as he placed my hat crookedly on my head. We exchanged names and favorite things, him smiling intensely all the while. I pointed out his Batman shirt and he told me he was his hero. He began to punch the air, emulating Batman beating up the bad guys.

I learned many things from Louis, even with my “Mal Español,” but the most interesting thing to me was how he managed to be so happy in a life much less fortunate than my own. I never saw him without a smile, never saw him complain, and always saw him willing to help. Through my conversation with Louis, and ones with the other children, I learned the importance of appreciation for what is given, and the importance of community. The place Louis lives is filled with amazing people who are always willing to help, and I am glad to have been a part of that experience this past week.

Connor:
The house we built became a home. The community in which we built the house accomplished one of the most extraordinary things I have ever seen. Building a house is an impressive feat, one I did not think was possible in a week before travelling to the Dominican Republic. The speed and efficiency in which community was able to construct the house was astounding. The number of people working towards a common goal is something I have only witnessed on one of my sports teams.

This past winter I was a part of the closest hockey team I have ever been a part of in my 15 years of playing hockey. But that team- although the best team I’ve been a part of- was no match for the team that made up this community. Each individual at the work site had a role and did it to perfection. From the masons, to the cooks, to the little children helping out most of the time- fooling around the rest of the other time- the community worked harmoniously towards the common goal of constructing the house.

This is the same way a team works towards a championship. Jose explained to us that in order to have a house constructed for your family in the Cambiando Vidas program, you are expected to help out on the previous build and the following build. The word ‘expected’ is the wrong word because every single person wants to help out with the house from simply wanting to support their community. This brings me back to how the house became a home. I define a home as the place where someone feels most comfortable, and the most impressive thing is that everyone at the work site felt comfortable and included there. At that moment, the house became a home and will continue to be one in the community for years to come.

Francis:
This trip to the Dominican Republic for me has been rewarding in various ways. Before the trip started, I was unsure what I would get out of my experience. All I thought about was the work that needed to be completed to create a house. Even before the trip started, I lost sight of the many other reasons I decided to sign up for this trip.

However, one night at dinner, the local trip leader, Jose spoke to the group about how Cambiando Vidas started. Jose’s speech finally made me realize what I have received from this experience of building a house in the Dominican Republic. The main point of Jose’s speech was to explain to the members of the Deerfield community that we must reconnect with genuine human interaction free of electronics and distractions.

Additionally, Jose talked about helping people out and being selfless rather than being egotistical. After listening to Jose, I felt inspired to act upon Jose’s talking points. The next morning with a new understanding of why I was here, when I got to the work site, I immediately noticed the community’s collective selflessness. All of the locals here put the needs of others in front of the needs of themselves to strengthen their tightly knit community. For example, the friends of the people we built the house for went out of their way to take time off from work and their lives to come support the family and help build them a home.

Also, I realized how much the locals invested in interactions and experiences with each other. They took the time to go out of their ways and connect with people. For example, when driving, all the locals honk their horns at each other to say hello. If needed, they will slow down and have a casual conversation with someone on the side of the road, not worried about being late or wasting time, but just living in the moment and being invested in each other. This is one of the most significant things I have learned when traveling to the Dominican Republic. In the beginning of this trip I thought that I was the one that was helping the locals by building them a house, however in reality the locals taught me a life lesson about being selfless and investing in genuine experiences with others. 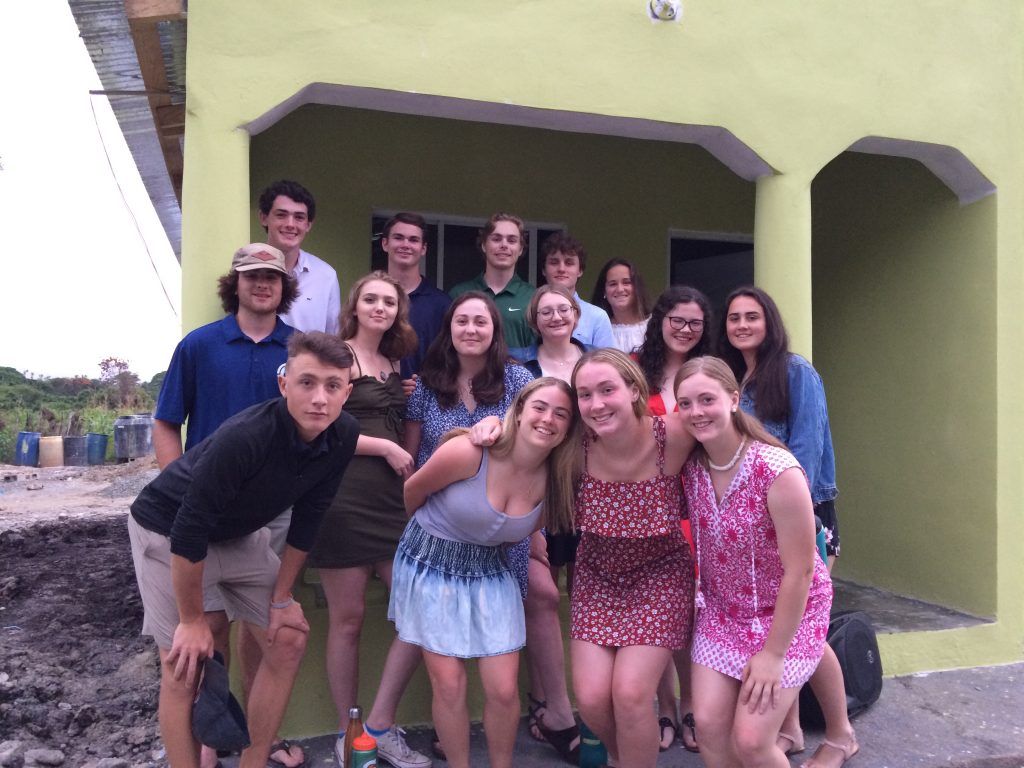