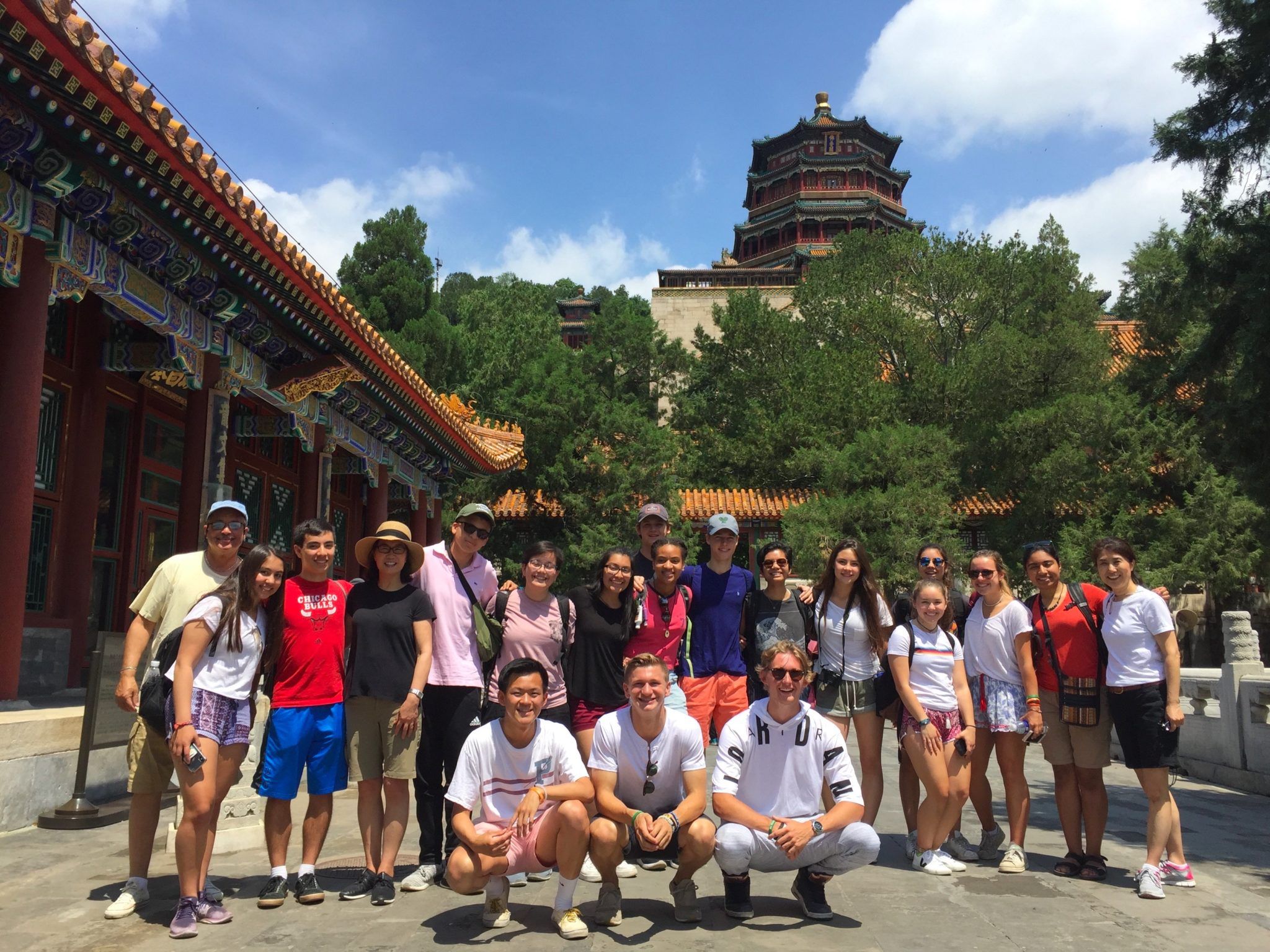 Following our restless first night of sleep at Shiyan High School, our group met in the cafeteria for a light breakfast of bean cakes, rice, dumplings, and steamed buns. By 9:00am, we had set off for the Qing emperor’s summer housing complex, the Summer Palace (颐和园). Throughout the bus ride, our guide Tian Laoshi (Teacher Tian) spoke about the history of the palace, primarily focusing on its construction and functionality, later quizzing us on what we had learned with the promise of ancient Chinese money as prizes.

Constructed in 1750, the palace is said to have been built in celebration of the Qing emperor’s mother’s birthday, and as a result reflects themes of longevity in the names of many of the surrounding natural landmarks (the name of one of the mountains literally translates to “longevity hill” (王寿山). During the emperor’s reign, the palace was considered to be the second political center of the the Qing dynasty, as he traditionally only lived in the palace for 5-6 months out of the year. However, when Empress Dowager Cixi, the most powerful female woman in Chinese history, took control of the throne through manipulation of her male relatives, she began to live in the palace full time, and called for a massive renovation, second only to its previous reconstruction due to its burning down in the late 1800’s by Anglo-French forces. 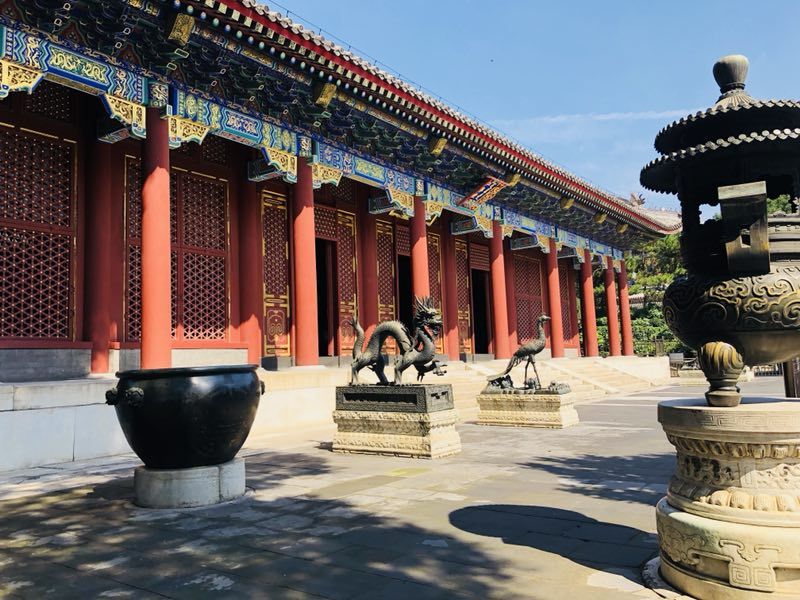 Perhaps the most fascinating renovation Cixi made was the positioning of the two statues in front of the imperial buildings. Traditionally, there were two statues placed outside the buildings: in front, a dragon, representing the emperor, and behind it, a phoenix, representing the empress dowager. However, due to her substantial power, Cixi switched the positioning such that the phoenix came first— a visual representation of her heightened power. Cixi ruled for 48 years in the Summer Palace, and though she was not officially the emperor, she was called as such by the Chinese people, as she ultimately made all decisions regarding the empire. Her life story is fascinating, beginning with her entrance into the palace as a concubine at the age of 13, and ending with her continued execution of many of her male relatives in order to maintain the throne. 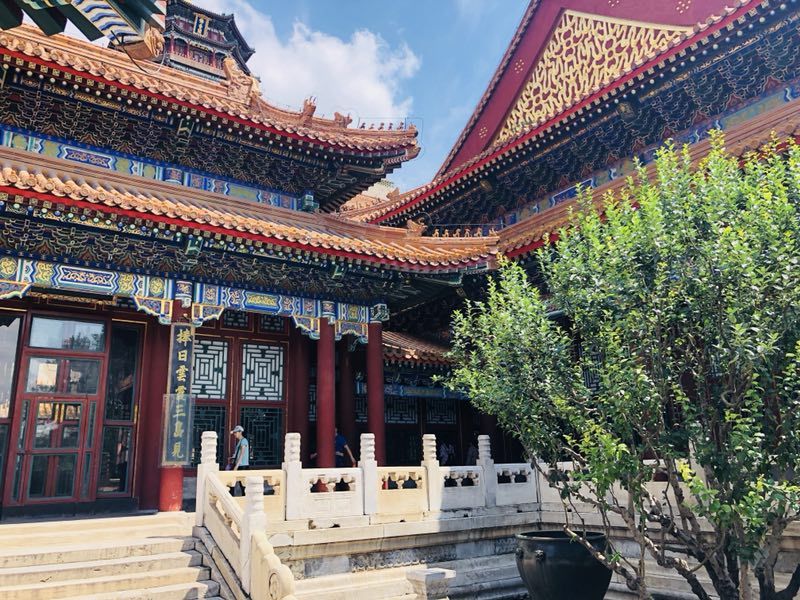 The palace itself was simply breathtaking, and posed a stark contrast to the bustling city of Beijing, as it housed man-made lakes, towering mountains, and lush trees, all of which seem to be scarce in the city itself. The buildings were primarily painted in surprisingly vivid hues of red, blue, green, and yellow, all of which were painted onto intricately carved wooden structures ranging from courtyard passages to several story temples. Later on, we encountered a few calligraphy artists drawing on the stone pathways with water, one of which drew Allison’s portrait followed by the English word “BEAUTIFUL”. Though the area was flooded with tourists, we managed to find small corners in which we stopped to take in the beauty around us, and listen to Tian Lashi’s little anecdotes about the ruthless empress Cixi. 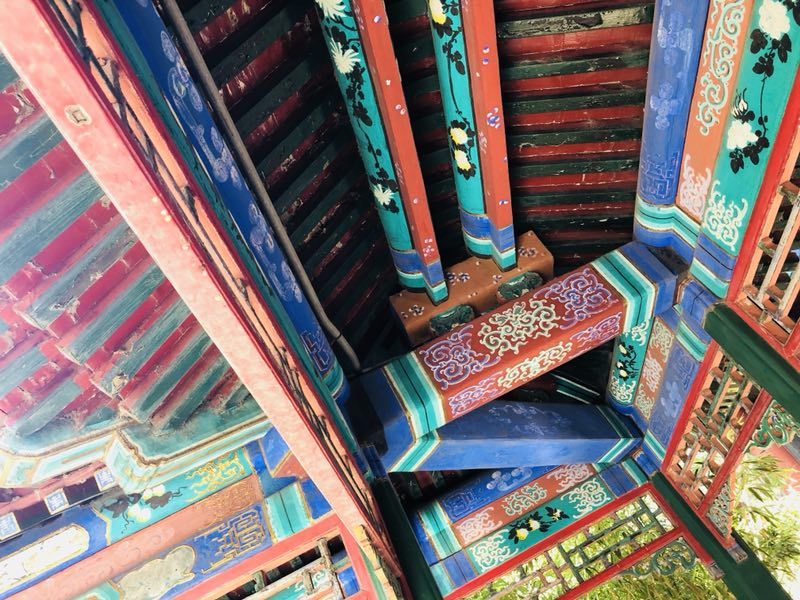 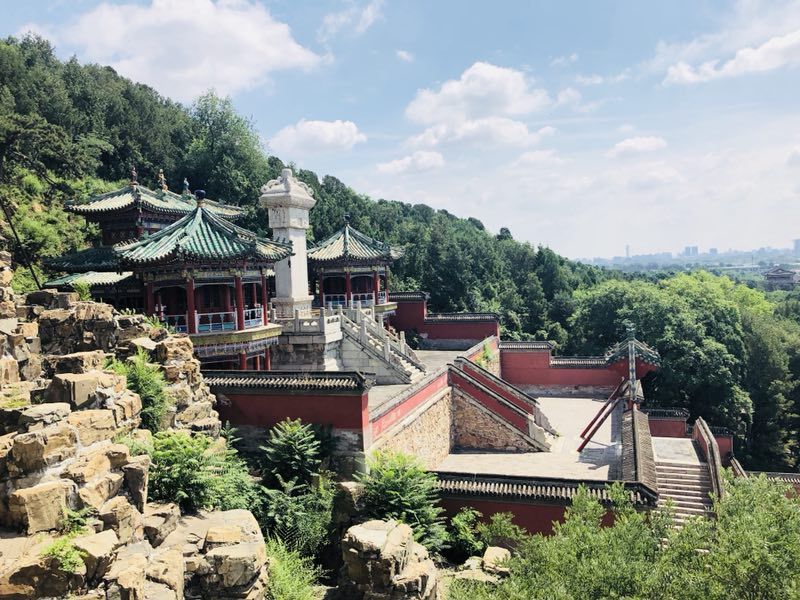 After touring the ground level corridors and courtyards overlooking the lake, we hiked three stories of steep, stone steps to the the top of a mountain on which an intricately carved and colored temple sat. There, we coincidentally ran into three Deerfield alums, Michael Wang, Theo Lenz, and Andrew Peck. After a quick reunion, they joined us on a dragon boat ride across the lake towards lunch at a local Cantonese restaurant. 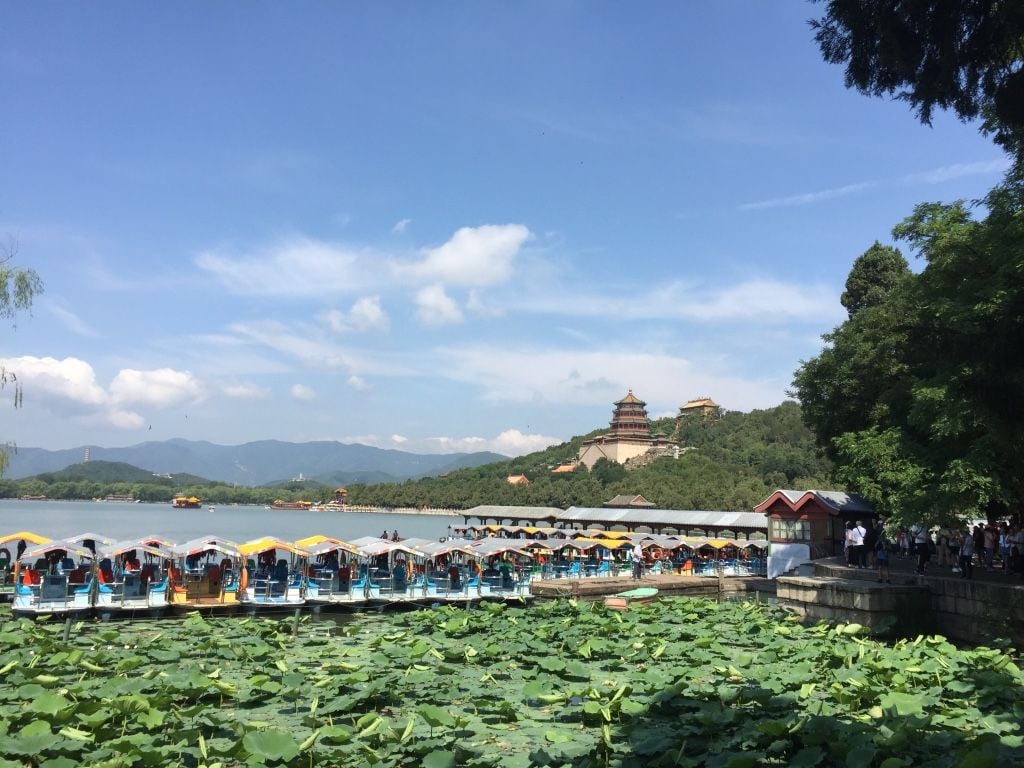 The lunch food was the most unfamiliar we’ve encountered, consisting of several types of meat and vegetables. It truly was an incredible amount of food. It seemed that every time we thought the meal was over, another dish was brought over! At our table, a popular choice seemed to be the beef lo mein. (Thanks to Mike Wang for ordering us more noodles.)

After lunch, we headed to the Bank of China, where all three teachers worked to exchange our money while conversing in rapid Chinese with the bank tellers. Though we anticipated the visit would take around half an hour, it ended up taking almost two, as the tellers insisted upon inspecting and hand counting each bill. Although we were left with only half an hour to wander the city streets, the experience of exchanging currency was an interesting and important one.

After quickly touring the city, we hopped back on the bus and returned to the school for dinner. The dinner, similar to our breakfast, consisted of (deceptively spicy) fried chicken, rice, and steamed buns. After dinner, we split into groups and toured the area surrounding the school. Only three or so blocks away is a bustling commercial city filled with every imaginable department store and restaurant. Some malls felt quite similar to those in America, many even sporting American logos, while other malls were strictly Chinese, and though more intimidating to navigate, were infinitely more interesting. Conversing with some of the vendors in Chinese was fun, and we tried out a few improvised, and probably slightly inaccurate phrases such as “we’re just browsing”. After asking a few kind strangers, our group eventually realized that the bargaining market we had been searching for was a subway/train ride’s distance away, and instead settled on exploring more of the commercial malls until curfew at 9:50pm.

We begin school tomorrow with Shiyan students at 8:00am! Over the next few weeks, we’ll be taking 70+ minute language and culture classes at the school. I’m excited to see what the coming weeks will bring! 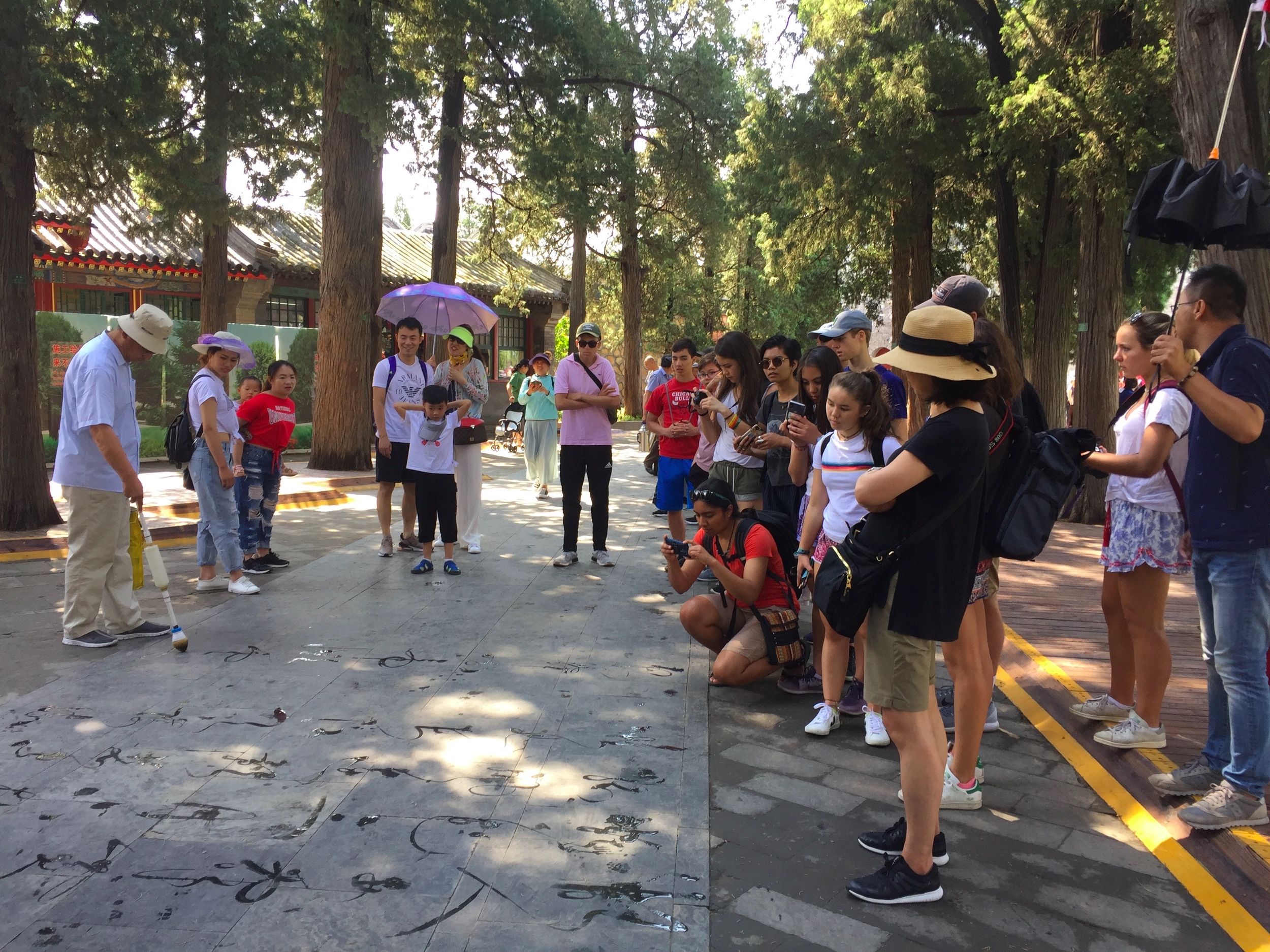 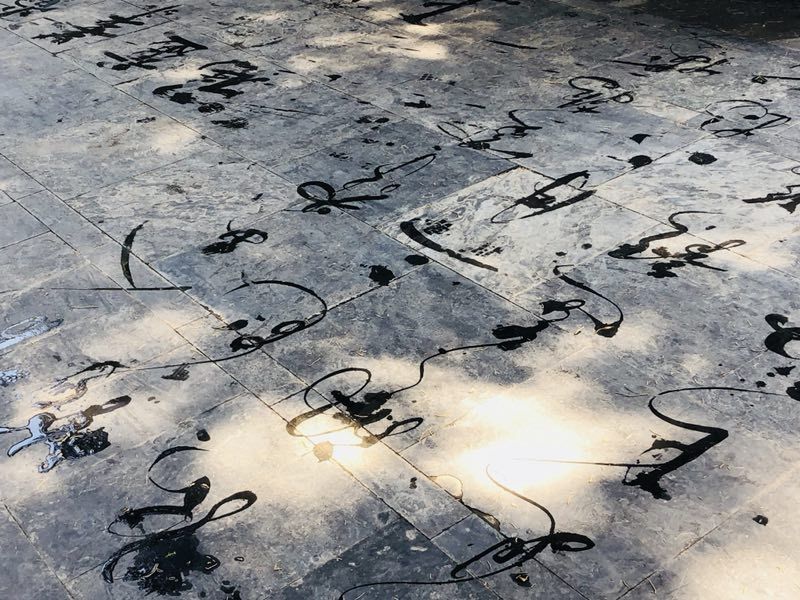 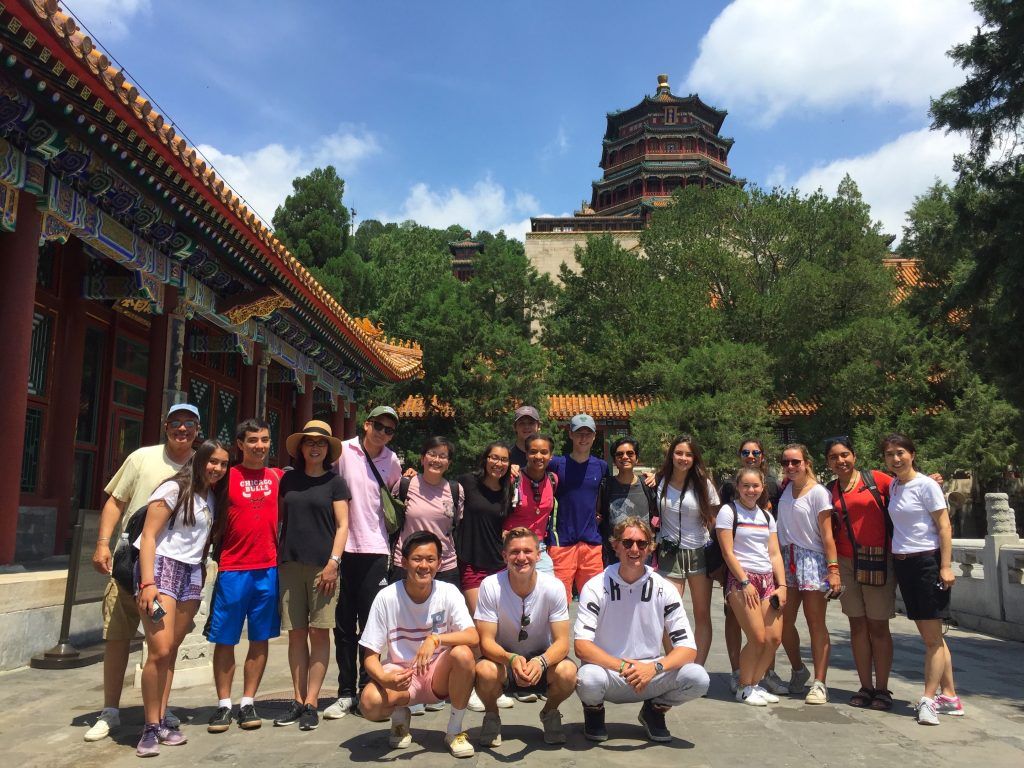