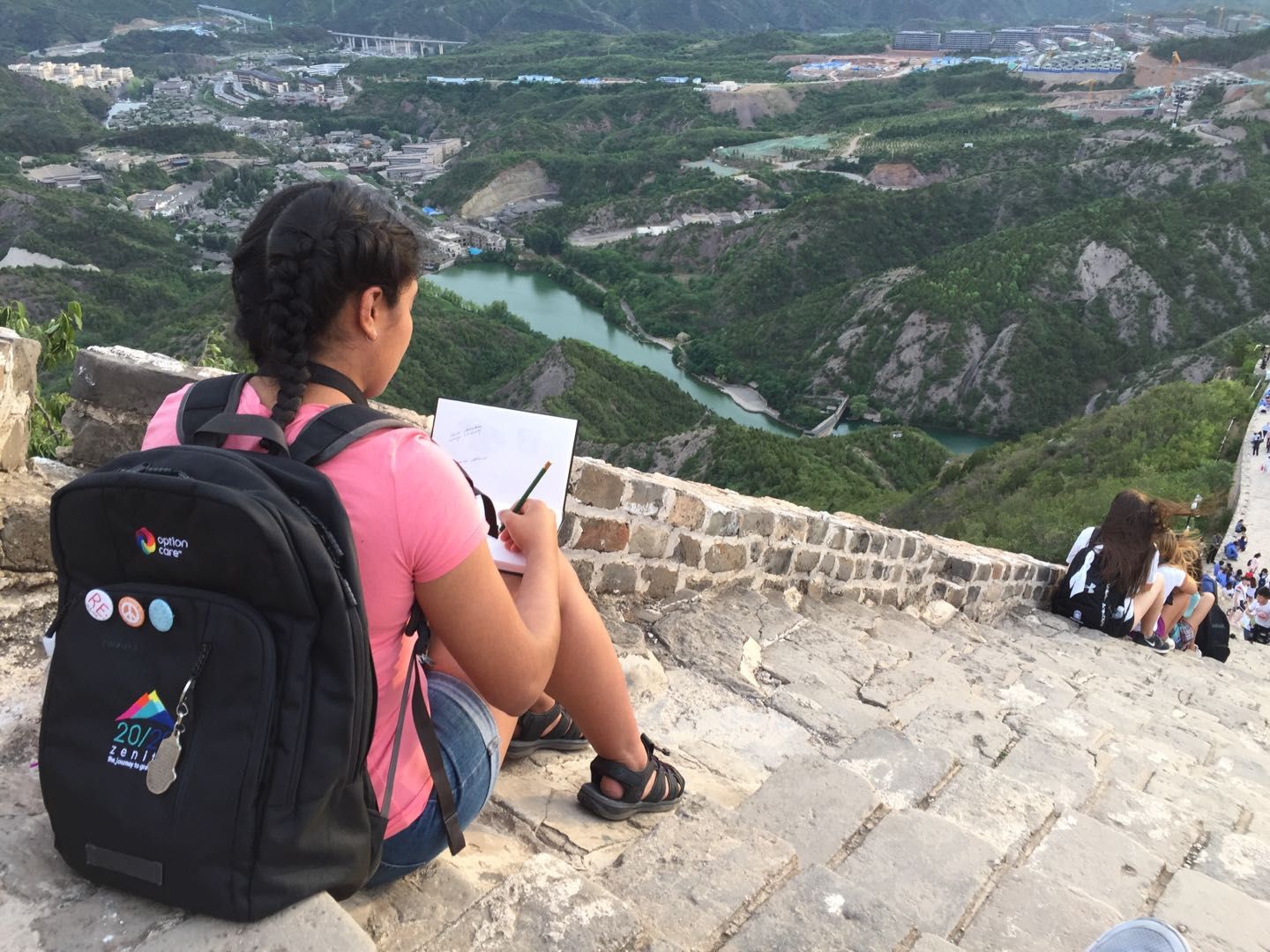 Fernanda Ponce ’19 describes the groups first day in Beijing! A day full of great food, culture and history, and much opportunity for language immersion. 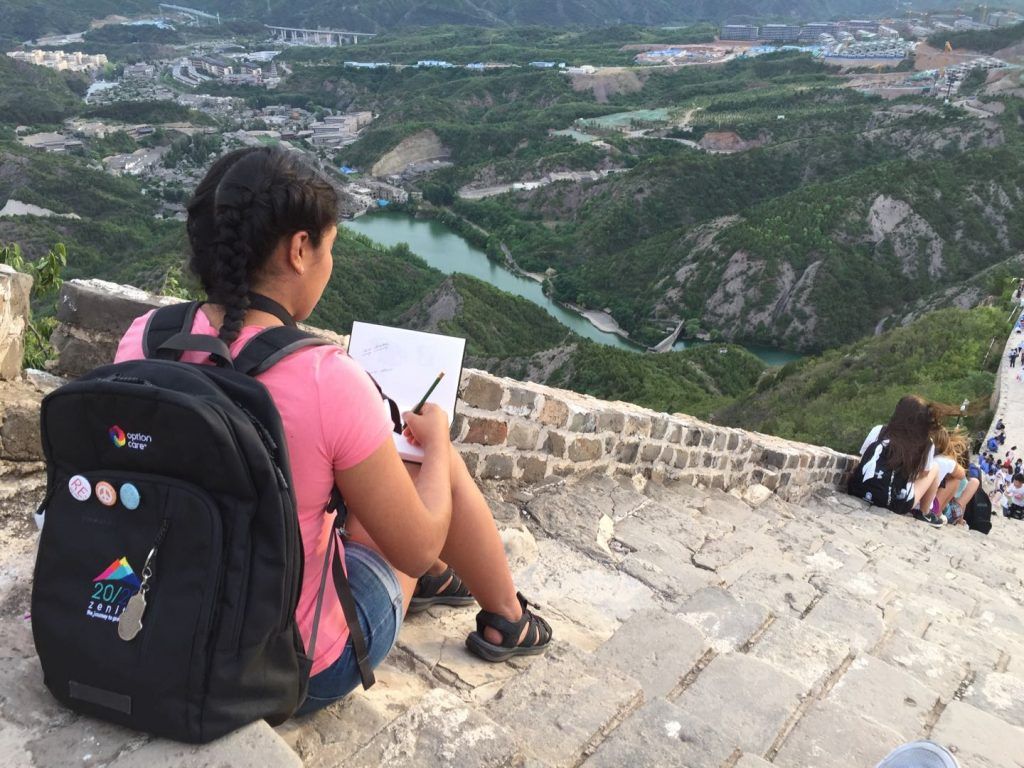 I woke up at 5 o’clock this morning, and could not manage to fall back asleep. Maybe it’s the jet lag, or maybe I am subconsciously too excited and nervous about what today will bring. I decide to read a couple of more pages from my China in World History textbook by Paul Ropp, and after I rap up my review on the Spring/Autumn and Warring States period, as well as the Legalist, Confucian, and Daoist philosophers, I get ready for the day. An hour later, as I wait for my roommate to finish getting ready as well, I turn on the TV and surf through some Chinese channels, half understanding the 天气预报 (weather forecast) the newscaster gives. (Okay, maybe not half understanding, just picking out half-words here and there; there is certainly a sharp learning curve that awaits me!)

Mom, I love your breakfast sandwiches, but I have to say I may like Chinese breakfast slightly better. I ate 红bean paste包子, sautéed 青菜 (vegetables), and a fried dough stick. As I chew my food, I leaf through a newspaper in English I picked up in the lobby, and I read an opinion article about how the UK and China should ally to promote free trade at a time that the U.S. was being difficult with trade. In another article, I learned about China’s new friendship medal, and how President Xijin Ping has won medals from Russia and Pakistan in his efforts to promote world peace efforts.

After breakfast, we hit the road! I accidentally got my SIM card stuck in my emergency phone, and it was probably a good half hour before Tian 老师, our guide, started his tour, first by asking what we could tell him about the Great Wall (or 长城). Of course, thanks to Paul Ropp and Ms. Friends’ Asia in World History course, I semi-confidently answered that Qinshi Huangdi built the Great Wall during the Qin dynasty. Tian 老师 was a little underwhelmed by my answer, even though I was the only one who had participated. We all had much more to learn, and Tian老师 proceeded to teach us about the 7 kingdoms that existed before the Qin conquest, all the way to giving us chairman Mao’s famous Great Wall quote, “ “.Tian老师 also told us that the Great Wall was more than 一万利 (10,000 km), and that some people even claim it can be seen from the moon…

Looking out the window after Tian老师’s talk, I was amazed by the terrain I observed out my window: everything was mountains covered with rich, green vegetation. Instantly, I was reminded of one of Mr. Boyden’s famous quotes, “Look to the hills”, which I have always interpreted as “be humbled by mother nature”, which I was. We arrived first to our hotel, located in a resort called Watertown, and then proceeded to lunch. Watertown is a beautiful place, and someone in our group described it accurately as, “It’s like old new, when they try to make new things look old”, and indeed, as we were eating, Kelly 老师 pointed out that the architecture of the restaurant was from the Ming dynasty. (The only thing I can say about the lunch we ate was that it was 非常好吃 (very delicious!) I even tried the neck of a 鸡肉 for the first time in my life; it was quite juicy and flavorful.) 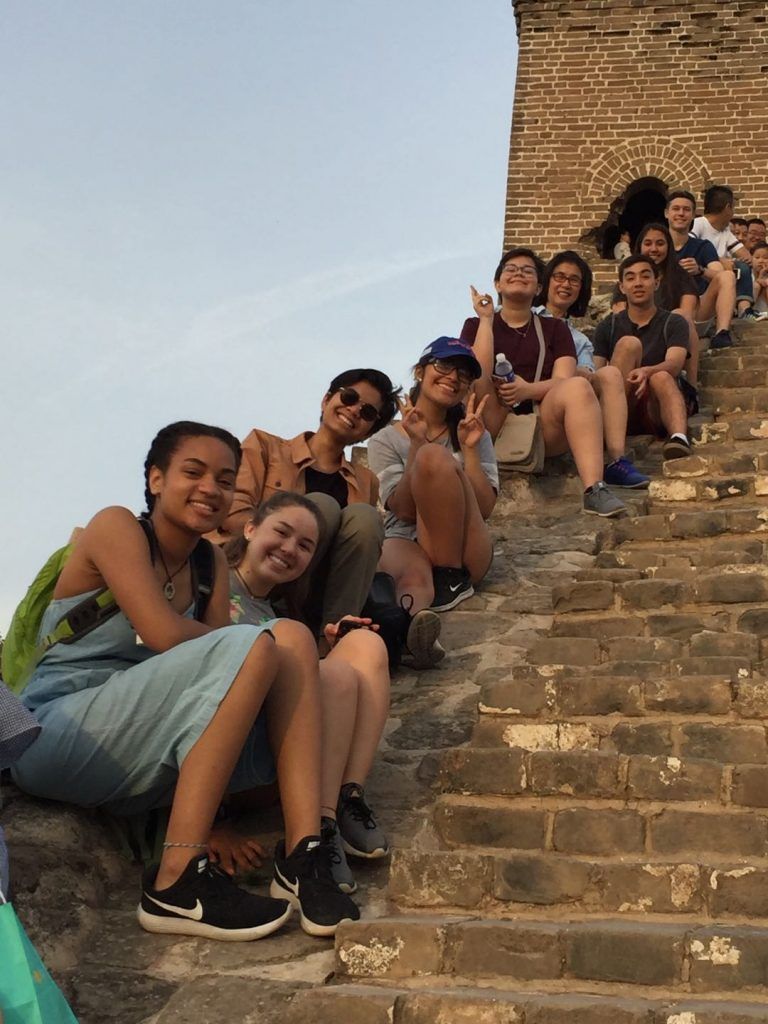 After lunch, we came back to the hotel, and some of my group mates and I explored a little. We found a really nice outdoor swimming pool with a view out to Watertown and some construction. We could also see a tower from the Great Wall peaking out from the mountainside. After relaxing by the pool for a bit, we set off on our journey to the Great Wall! To get to our destination, we first took a boat ride through some beautiful parts of Watertown. After the boat ride, we walked to the cable car station where we would be taken up and up into the mountain to the Great Wall. All I can say is that the cable car ride was terrifying as we were taken 200 meters into the air. Once we got to the Great Wall, my stomach sank as I realized how steep and high up the 长城 really is! As a person who is terrified of heights, I had to look at the ground the entire time hiking up in order not to feel as though I was falling off the mountainside. But the hike was extremely rewarding; the view on the Great Wall was phenomenal. Our group stayed at the wall for a good 2 hours, waiting for the sunset. I began drawing in my notebook, and several people stopped to compliment and watch, which was my personal highlight, besides the amazing flaming pink sunset, of course. 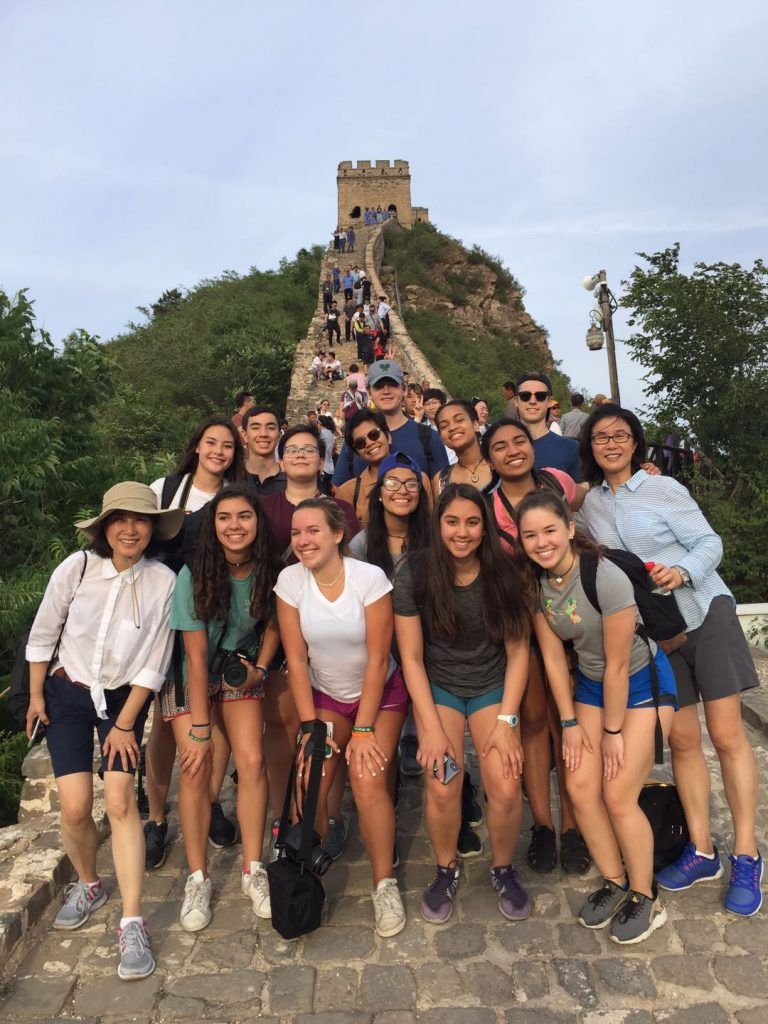 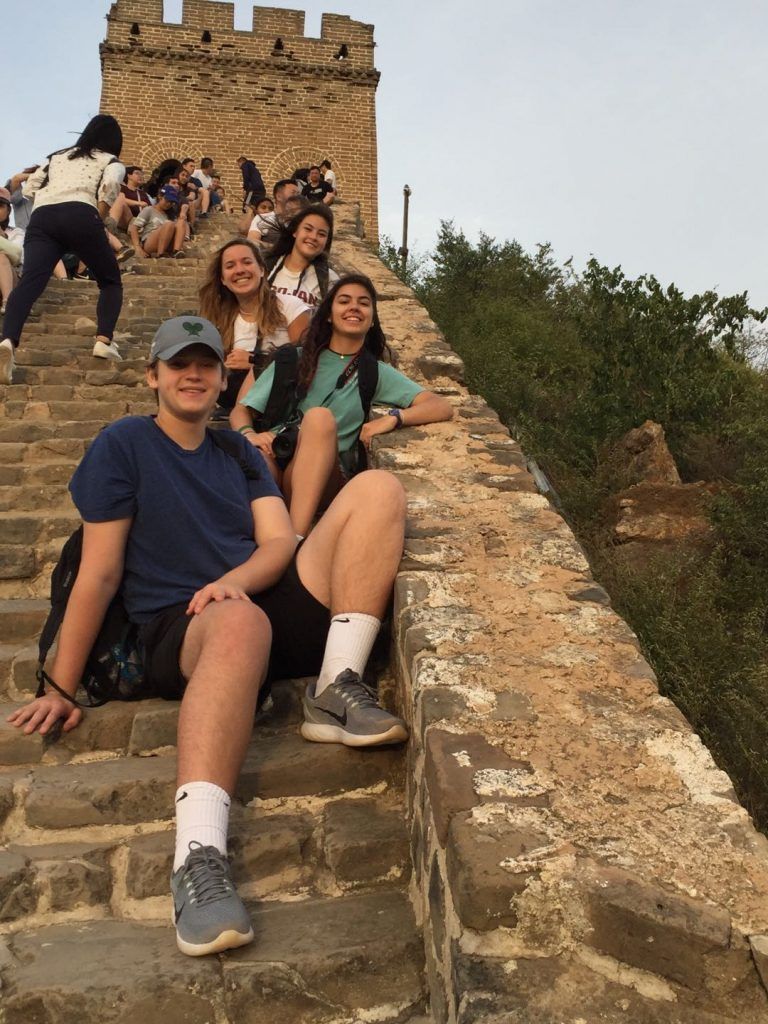 After climbing the Wall, it was time for dinner, and we ate 火锅(hot pot), which was interesting, as my table members and I tried experimenting with what time was the right time to cook our noodles and our meat. (Did we leave the ingredients to boil for 3 minutes, or 2? Did we put in the ingredients when the water was boiling or just about to?) Any which way, at the end 我们都爆了. We finally returned to the hotel after a very satisfying and exhausting first full day in 中国.

There is still a lot of food, culture, history, and language to immerse myself in the next couple of weeks; maybe then the reality that I’m here, in one of the richest countries in the world in terms of history and culture, will finally hit me. Until then, I probably need to start using more of my 中文! 要是我在中国，我应该练习说中文！