American South #7: Stepping Out Of Our Comfort Zone

Arvin Mou ’25, recounts an emotional visit to the 16th Street Baptist Church, and Chrissy James ’24, reflects on the meaning of community and making new friends.

In the morning, we were in Birmingham AL, and then we took a bus ride to Memphis in the afternoon and evening.

After waking up for the day and marveling at the fresh snow outside, we walked to a local café for breakfast. With our stomachs full, our group rode on the bus to Reverend Fred Shuttlesworth’s historic Bethel Baptist Church. We followed signs along the sidewalk all the way around the block, which had abandoned and run-down buildings. It reminded me of the buildings in Selma, where we visited a few days ago. We took a lap around the block where his church once was. The signs showed the rise of Fred Shuttlesworth and the fact that even after his house was bombed, he continued, undaunted, fighting for the rights of his community. It struck me that the Civil Rights movement consisted of many courageous and inspiring leaders like Fred Shuttlesworth that I had never heard of. I am thinking about saving these neighborhoods from further decline and I am wondering what my generation can do to help the community to prosper.

We went back on the bus and went to the 16th Street Baptist Church. There was a museum in its basement and an active church upstairs. After taking a few photos, we went downstairs for a tour. The tour guide recalled back in 1963 when a bomb went off that killed four innocent children. A bomb was planted by the local KKK chapter under the stairs and destroyed one side of the building. Two more people died that day in unrelated incidents. The FBI knew the perpetrators by 1965, but they were not prosecuted until many years later, for some almost forty years later. However, this incident put the Civil Rights movement in the national and international news and led to a “rising tide of discontent.” This shows how the shameful actions of four people scarred multiple generations and highlighted the problems with society at that time. However, this also led to rising interest in the Civil Rights Movement nationally. The bombing, as disgraceful as it was, was also a catalyst for change.

We then went across the street to the Birmingham Civil Rights Institute, a museum, where we looked at the 16th Street Baptist Church bombing in national context. It was very emotional to me because it had multiple mournful artifacts, including a baton used to beat protesters and a KKK robe. I could imagine how fearful people were in that treacherous time. Afterward, we walked across the park where protesters once demonstrated. We went to the Pizitz Food Court to get lunch and got on the bus to Memphis. That morning made me get out of my comfort zone and expanded my knowledge of that era. 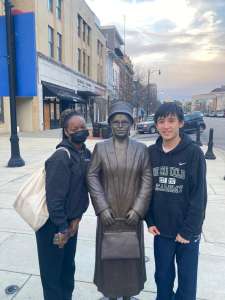 On the drive to Memphis, I sat next to Chamari during the bus ride to discuss potential designs for our trip merchandise. Earlier in the morning as well as last night, Gabby and I shared a few ideas together; but since Gabby slept during the ride today, I voiced her ideas to Chamari. We decided to take on the task of designing a piece of clothing since we are some of the visual artists within this unique group of students. It was a fun and exciting experience. I would voice out opinions and put our ideas out there while Chamari got to work and developed a rough sketch. I like having this small project because we all seemed to be super cooperative. When I had an idea, Chamari helped develop it and gave suggestions and all together it was brilliant team work.

When we arrived in Memphis, the group packed away their things and headed for dinner. After a nice stroll in the streets, we made our way to a wonderful restaurant with great food and live music. As a music lover myself, I danced and sang a lot tonight, so much to the point where my throat is currently killing me. It was truly an amazing experience. The light of tonight wasn’t necessarily the food in particular, but instead the experience of community and the importance of music. Regarding community, I was a little nervous at first because I couldn’t sit with the friends I was closest to while they all sat together. However, I am genuinely so grateful and glad that I sat with the three other students because I can say I had a phenomenal time; we were cracking jokes left and right, laughing and having a grand time. The four of us would not necessarily speak on the regular together, however tonight was so great because I allowed myself to be pushed out of my comfort zone and try something new, new friends at dinner. 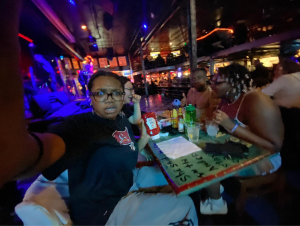 Additionally, the music aspect of the night was great. I’m not one to listen to jazz or blues, however tonight was a total eye opener for me. The musicians sang with so much soul and it really made me feel so free and energetic. It was great to once again get out of my comfort zone and dance; at first I was scared of the embarrassment because there were not any people on the dance floor. However, once my friends encouraged me to get up, it was a wonderful night. Eventually I got another kid at my table to dance, and overall we had so much fun. I loved dancing and singing tonight, especially because the music was produced and sung by black people; I feel like it was such a comforting and familial experience to listen to my brothers and sisters sing with pride and joy. 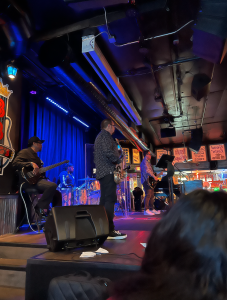