Make room reservations well in advance. Seasoned Deerfield parent know that lodging in Deerfield and the surrounding area fills up early for the Memorial Day weekend. You’ll find plenty of choices in the area by searching for rooms in the 01342 zip code, or checking DA’s lodging page: Deerfield.edu/about/visit/lodging

Send out invitations and announcements promptly. Parents receive a box of 10 invitations to commencement. In the case of divorced parents, Deerfield Academy has sent each parent a box of invitations. In this instance, we expect two separate registration forms for the graduating senior.

Parents should use the RSVP link on this webpage to register for commencement. One parent will be the main registrant and, in their registration, they can add up to 9 additional guests. There should be one form submitted per graduating student. In the case of separated parents, we expect two separate registration forms for the graduating senior. In the registration process it is important that you select the meals you and your guests will be attending. If your guests list change you will be able to go in and modify your registration. RSVPs are due April 22.

While Deerfield has never capped the number of guests per graduate, we hope that 10 invitations are sufficient. Please contact Tessa Doubleday (tdoubleday@deerfield.edu) if you need more invitations. Extended family members are welcome to all events planned by the Advancement office.

Accessible seating it available under the Commencement tent. Be sure to indicate on your registration form if you or a guest wishes to sit in this area during commencement.

What you see on the screen is available livestream and also recorded. Video playback is posted within days of the end of Commencement. There will be professional photographers on hand to get a shot of your children as they walk up and when they receive their diploma. If you decide you want more photos, you can take shots from your seat. After the ceremony, you will want a family photo in front of the door at John Williams dorm.

What to Bring for the Weekend

With a variety of activities going on over the weekend, you may want to bring a couple of different selections of semi-casual attire.

Please note that New England weather is famous for its unpredictability. Layering your clothing is recommended, and be prepared for rain as well. The average temperature range for May is between 69℉ (high) and 45℉ (low) (21° to 7° Celsius).

Deerfield Academy encourages day students to stay on campus after the Senior Class Meeting. Those who plan to go home should plan with the Student Life Office office ahead of time. Keep in the mind that Massachusetts restricts drivers under the age of 19 from operating a motor vehicle between the hours of 12:30 am – 5 am.

There are always plenty of places to park. When you arrive to campus, follow the directions of security. Also, don’t forget that if you have any guests who will need extra help getting around, please indicate that in your registration form.

The Commencement Tent opens promptly at 9 am. Sections including accessible seating, will be set aside for graduating seniors, underclassmen, faculty, trustees, and guests. Before the weekend, Deerfield will provide you with a diagram indication the sections for guest seating. Large screens at the front of the tent will provide you with the best view of the event, including the Commencement walk down Albany Road. There really is no bad seat in the tent!

The Walk down Albany Road

Graduating senior line up on the lawn between the Field and McAlister dorms. At 10am, they begin their procession down Albany Road, which will be broadcast on the screen in the tent. The path will be lined by undergraduate students. Guests are asked to be respectful, allowing plenty of room for the cavalcade to comfortably enter the tent. 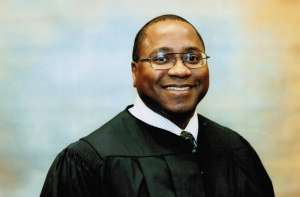 Victor was born in Los Angeles and grew up in Compton, attending Martin Luther King, Jr. Elementary and Willowbrook Junior High schools.  In 1981, he and several other students from Willowbrook took advantage of an opportunity to attend boarding school.  So, at 15 years old, with the support of family, friends and teachers, and the aid of a scholarship from A Better Chance, Inc., Victor went to Deerfield Academy, located in the Berkshire Mountains of western Massachusetts, where he spent most of the next three years.

In 1984, Victor returned to Los Angeles, attending the University of Southern California (USC), and earned bachelor’s degrees in Broadcast Journalism and Economics.  He matriculated to Yale Law School, where he studied as a John M. Olin Fellow in Law and Economics, became a director of the Moot Court Board, participated in the Domestic Violence Project and worked on the Yale Journal of International Law.  After earning his Juris Doctorate (Law) degree, Victor worked in private practice for two years, at Gibson Dunn & Crutcher, representing clients in commercial litigation, real estate transactions, bankruptcy proceedings and First Amendment litigation.

In 1993, Victor began working in the General Litigation Division of the Office of the County Counsel (the attorneys for the County Board of Supervisors and other County agencies), where he successfully represented the Sheriff’s Department, Department of Public Works, and other County agencies, as well as the Superior Courts, in a variety of civil and criminal matters, in both state and Federal courts.

On March 5, 2006, Governor Arnold Schwarzenegger appointed Victor to the Superior Court, where he serves as a judge, assigned to a felony court in the Southwest District, with occasional, responsibilities over some civil matters. Today, he presides over a criminal trial department in the Southwest District (Inglewood Courthouse).  He is the Assistant Supervising Judge of that District, which covers the South Bay beaches to South Central Los Angeles, and the Palos Verdes Peninsula to Culver City.  Judge Wright served on the Executive Boards of the California Judges’ Association (CJA), and the California Judges’ Foundation (CJF), and as Editor-in-Chief of The Bench, CJA’s quarterly newsletter, and serves on the Community Outreach, Court Services, and Court Security committees of the Los Angeles Superior Court.  He has also served on the Drug Court, and Compensation and Benefits committees in Los Angeles.  Judge Wright is a founding member of the Association of African-American California Judicial Officers (AAACJO).

On a personal note, Victor and his wife, Julie, have two daughters, Sarah (DA ’20) and Lauren, and they reside in Los Angeles.  In May of 2011, Victor was elected to the Board of Trustees of Deerfield Academy, and considers his service on the Board as one of the greatest honors of his life. Victor loves to cook, spend time with his family, and attend football, baseball and basketball games with his friends and family.