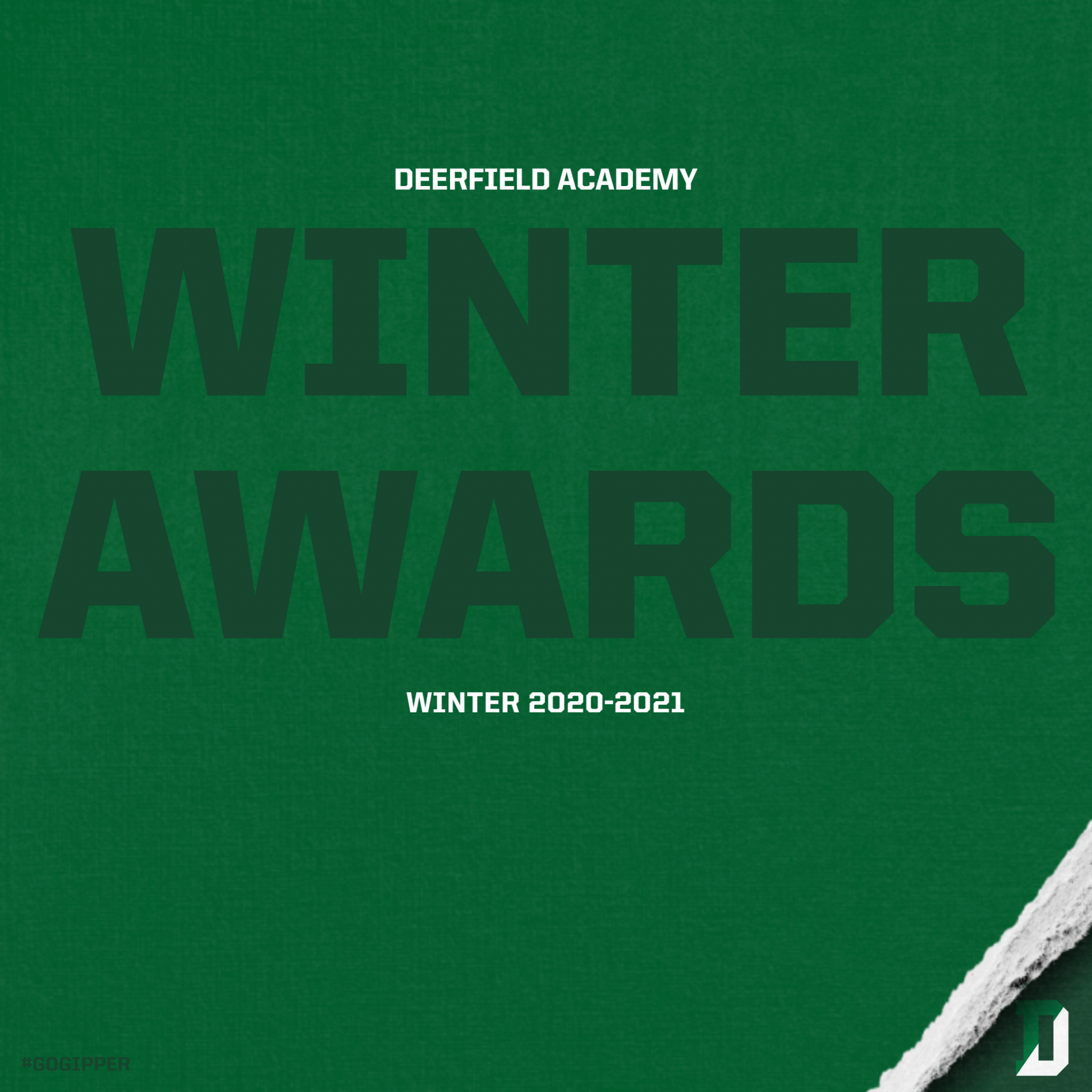 On Wednesday, during the first School Meeting of the spring term, students and faculty gathered virtually to celebrate the return of students to campus following spring break. Mr. Howe took the opportunity to reflect and congratulate all of our winter co-curriculars on their courage, creativity, commitment, perseverance and success during the previous term. Furthermore, Mr. Howe recognized the winter award winners and wrapped up his winter reflection with his traditional Top-10.

In the winter term, we experienced the return of our varsity teams to interscholastic competition after a yearlong hiatus due to the COVID-19 pandemic. At the conclusion of the season, the ski team had executed a full ski season, we collectively competed interscholastically in 19 contests, hosted virtual competitions, held dance and musical recitals and a theatre production which are showcased on the artsapalooza website, community service projects were pursued and much more.

Our athletic teams boasted a 14-4-2 overall record in the winter, which included an undefeated final weekend, 5-0.

Girls varsity basketball senior co-captain Angela Czeremcha earned the team’s most valuable player award. From Coach Schloat, “Angie has been an outstanding leader this year, especially in the face of a challenging season.” Sophomore Meghan Holland received the team’s most improved player award. The Keller-Burrell Award was awarded to Claire Cummings ’21 and Evan Burkert ’21. Both were nominated for the award for their intensity, courage, and passion for the game. Claire has been a four-year member of the team who has consistently led by example every day with her kindness, mentorship of younger players, and selfless attitude. Evan kept everyone’s spirits high and played with intensity when her team needed leadership on the court. Her “momma-bear” care for her team was just what was needed in this most unusual year.

On the ice, the girls varsity hockey coaches recognized their team captains; Lisa Ito-Bagshaw, Ellia Chiang and Keri Clougherty, for their hard work and leadership all season. And, recognized seniors Emma Tennant, Haley Sundstrom, Bri Felice, and Emma Vispapuu for their amazing leadership and for filling many important roles for the team all season.

The boys varsity hockey, Deerfield Cup award is given to that senior who in the opinion of the players and coaches contributed most to the spirit and excellence of Deerfield hockey. This year, senior captain Will Holland was awarded the Deerfield Cup. Sam MacKenzie ‘21 was the recipient of the boys varsity hockey 7th Player Award that is given annually to the player who contributes to the team in any capacity that is asked while being a superb positive team member.

The varsity ski team recognized three award winners. First, Claire Patton ’22 was awarded the Brooke Gonzalez ’97 Cup as the best girl skier based on points earned in league competitions. Second, Chip Coffin ’21 earned the Scott Keinberger ’79 award as the best boy skier based on points earned in league competitions. Thirdly, the Arthur H. Ruggles Jr. ’33 Ski Award, given to a skier who most represents dedication to and love for Deerfield simply by doing their best for the school through the ski team. This Award honors the memory of Art, who was on the Deerfield faculty from 1937-1970.  This year Nick Baker ’21 was awarded this award. According to the ski coaches, “Nick was a model of consistency during his three years with the alpine program. A co-captain this year, Nick led the team in his typical quiet and unselfish manner, always encouraging and quick to volunteer.”

This year, boys varsity squash senior captain Merritt Wurts was the recipient of the Bayne Bowl that is given to the player who best exemplifies the qualities of natural talent, sportsmanship, leadership, and the will to be the best in the game of squash. From coach Silipo, “As a four-year varsity players Merritt is one of the winningest players we’ve ever had.”

The winner of this year’s girls varsity swimming and diving Coaches Award is Taylor Coan ’21. When her successful swimming career was derailed by injury, this swimmer’s love for this team and her dedication to her teammates kept her on the pool deck throughout her final two years. She learned how to support her team while out of the water and showed that a leader does not have to be the person who swims the most yards at practice or scores the most points at meets. Rather, a leader is someone who inspires their team to bring their best and to do their best.

Senior diver, Sydney Bluestein was award the girls varsity swimming and diving team’s Most Valuable Player award this season. While Sydney’s natural talent is impressive, it has been her determination to achieve the goals she sets for herself that has led her to be one of the very best divers in New England. She simply would not be denied in her pursuit to achieve at the highest level, and her three top-two finishes at New Englands, including two championships, are evidence of that.

This year’s boys varsity swimming and diving team, according to the coaches, was committed to overcoming obstacles to make the most out of every opportunity given in order to improve and build for the future. This attitude started with the team leadership coming from senior co-captains John O’Loughlin and Marwan Gedeon Achi. The future of the boys varsity swim and dive program is bright with much gratitude going out to the graduating seniors; Mark Chung, Harry Niles, Peter Osborne, Sean Kim, John O’Loughlin and Marwan Gedeon Achi. This year, the coaches wanted to recognize these seniors for their outstanding commitment to the program.

The Deerfield Wrestling Trophy is awarded to that team member of the varsity wrestling team who in the opinion of the team and coaches was outstanding in leadership, sportsmanship, and ability. This year “without a doubt” the award is given to Angela Osei-Ampadu.

Congratulations to all of the winter teams, co-curricular programs and their coaches, directors and supervisors! 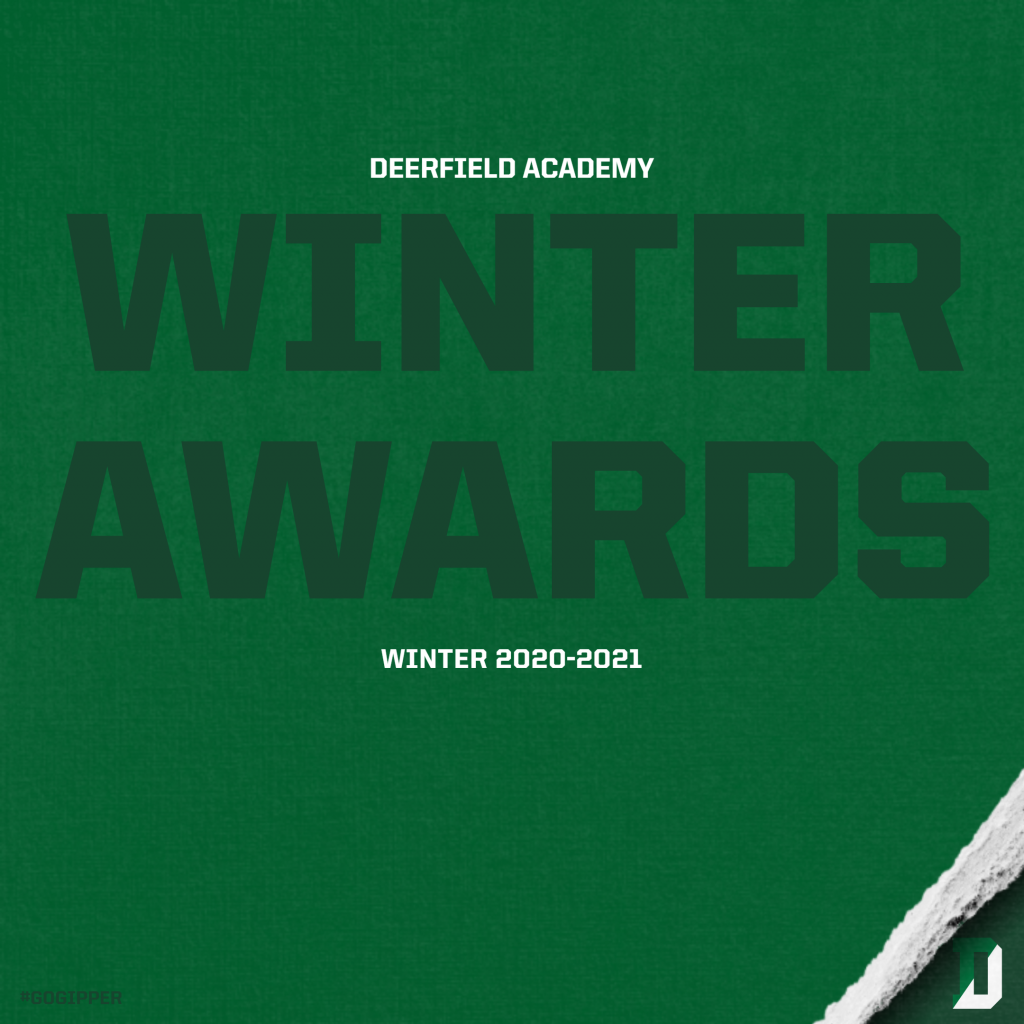