Arriving to campus in the fall of 2013 as a 9th grader, the Cape Elizabeth, ME native made an immediate impact as she earned a spot on the girls varsity lacrosse team as a freshman. Following her junior year, Kathryn was elected as a Captain for her senior season and will serve as such this spring. The girls varsity lacrosse team has improved steadily over Kathryn’s time at DA, posting a 6-11 record in her first season as a member of the Big Green and almost reaching double digit wins last spring when the team went 9-5 on the season. Kathryn will head to Williamsburg, VA next fall to join the William & Mary Tribe women’s lacrosse team that competes in the Colonial Athletic Association. The Tribe went 7-9 in 2016 and their schedule for this coming season includes games against Virginia, Stanford and Cal. 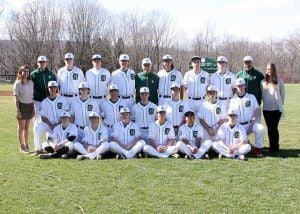 Beau Dana entered Deerfield as a 10th grader and has been a member of the Deerfield varsity baseball team since his arrival on campus. He is a right-handed pitcher whose fastball reaches in the 90s.  Interestingly, the Marblehead, MA native is a converted catcher who also has played outfield for Deerfield. After graduating, Beau will take his talents to the nation’s capital where he will pitch for the Georgetown Hoyas. In his final season with the Big Green, Beau looks to be a mainstay on the pitching staff, hoping to lead the team to a successful season in 2017.

Ted is a Tuscon, AZ native and arrived on campus as a junior last fall. On top of being a member of the reigning Western New England Champion Big Green boys lacrosse team, Ted is also a wide receiver and defensive back on the football team. Ted, a midfielder on the DA lacrosse team returns to a team that went 15-1 in the spring of 2016 and was among the top 10 teams in the country according to Inside Lacrosse. After graduation, Ted will join his brother, Chris ‘16, at the University of Denver as a member of the men’s lacrosse team that is less than two years removed from winning the program’s first NCAA championship after defeating Maryland by a 15-4 margin in 2015. 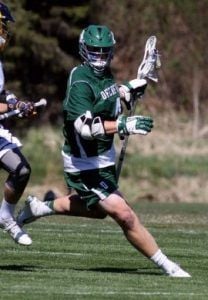 A Deerfield native, Brian was born and raised on campus and has excelled during his four years as a student-athlete at the Academy. Since 10th grade, Brian has been a member of both the varsity lacrosse and soccer teams and will captain both during his senior year. As captain of the soccer team this fall, Brian has been the centerpiece of the backline and has helped the team double its wins from last year with two games to go in the season. On the lacrosse field Brian is midfielder and was a member of the 2016 squad that won New England’s, only losing one game all spring in an overtime heartbreaker versus Trinity-Pawling. After graduating, Brian will take his talents and leadership qualities to the University of Delaware where he will be a member of the men’s lacrosse team. The Blue Hens compete in the Colonial Athletic Association which includes the nearby University of Massachusetts-Amherst, setting up a couple of homecoming games for Brian throughout his collegiate athletic career. 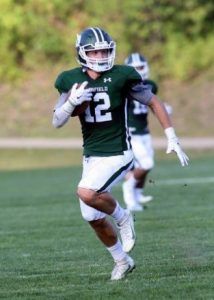 The Salt Lake City, UT native, Bubba Fairman arrived at Deerfield as a post graduate student this fall ranked as the number one recruit for the class of 2016 according to Inside Lacrosse’s “2016 Top 100 Young Gun Senior Rankings.” Known for his ability to run the offense from behind the cage, Bubba will look to showcase his goal scoring and play making ability at Maryland. In his senior season at Brighton High School (Utah), he scored 63 goals and added 44 assists. Aside from being one of the nation’s best lacrosse talents, Bubba has been a key contributor on the gridiron for the Big Green football team this fall, playing on both the offensive and defensive side of the ball as a wide receiver and defensive back. Upon graduation, Bubba will join the Maryland Terrapins men’s lacrosse team, who for the majority of last season were ranked as one of the top five teams in the country, losing 14-13 in overtime of the National Championship game to the University of North Carolina Tar Heels.

The Athletic Office will be hosting future National Letter of Intent Signing Day celebrations this year. Please stay tuned as we continue to recognize more of our student-athletes!