Girls Softball is on a Roll 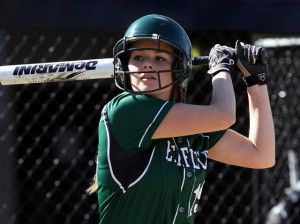 It’s known as the Mercy Rule, and is invoked—according to the Amateur Softball Association of America—when one team owns a presumably insurmountable lead over another and once that margin has been reached, the game is called. In the New England Prep School Athletic Council, they flick the switch on the scoreboard after five innings when one team is trailing the other by 15 runs or more.

“I’d say we’ve probably averaged about five or six of them a year,” said Becca Sherburne of the premature endings her teams have endured during her first four full seasons at the helm of Deerfield’s softball program. “But, you know something,” she quickly added, with a smile, before answering her own question, “we haven’t had one (Mercy Rule) called on us this season.”

The Big Green has caused the Mercy Rule to be imposed on two of its opponents this spring, though. Earlier this week, Deerfield’s booming bats hammered Stoneleigh Burnham into submission via a 30-7 score. Earlier this month, the Big Green sent Hotchkiss home for an early supper following a 15-0 knockout punch. And let’s not forget another close call late this season when Deerfield bested Suffield by a 13-4 count.

“It’s definitely instilled a great deal of confidence in us,” said Caroline Baldwin, a Big Green co-captain, on being able to go toe-to-toe the entire seven-inning distance with each and every opponent this season. “We’ve really played well as a team this season and although we don’t have an outstanding record (4-6), we feel we’ve become a more competitive team. And, as one of just four seniors on this team, we feel as though we’re leaving this program on an upswing.”

To the layman, four victories in one season may not seem like an overly positive note to be bidding adios on, but for Baldwin, co-captain Kayla O’Connor and fellow senior Maryanne Iodice, they know what it’s like to have chalked up five wins—over the previous two seasons.

Since taking over Deerfield softball five years ago, Sherburne has been making progress, albeit slow, in creating a blue-chip program. During her first two years, the Big Green won just two games during each of those seasons. It finished at 3-9 after her third year at the helm, while last spring’s campaign closed out at 4-6.

Hoping to continue its slow-but-steady assault on progression, “we set a modest goal for ourselves of winning five games this year,” admitted Sherburne, “so if we’re able to win one of our last two games of the season (on Wednesday, at Loomis, and on Friday, Williston-Northampton) we’ll reach that goal.”

Upping the team’s victory count hasn’t been the only numbers confronting Sherburne during her tenure in the Deerfield dugout, however. Adding names to the roster has proven to be every bit as challenging and every bit as important as well.

“During my first year, we had just two wins but had only 12 players on the roster,” recalled Sherburne. “In fact, prior to that first season I sent out emails to a number of students to see if they had any interest in playing softball and to other coaches as well, to see if they might know of any potential candidates.”

Sherburne’s attempt to reach out paid dividends, but not until the following spring, when the head count rose to 16, but the win count remained at two. One of her most intriguing recruits that season turned out to be Dana Delaney ’13. Prior to signing up with the Big Green, Delaney, who hails from the Bahamas, had never played softball before. She had played a lot of cricket, however, “and she did a heckuva job for us,” remembered Sherburne.

The roster count returned to an even dozen last year, while this spring the Deerfield dugout has been nearly bursting at the seams with 18 players now on board.

“This year marks the biggest turnout we’ve had for softball here at Deerfield in quite some time,” acknowledged Sherburne, “and in addition to that, I’m extremely happy to say that for about half of our regulars, softball is their primary sport.”

“I think the biggest key to our upswing this year has been our pitching,” said O’Connor, “it’s kept us in every game so far this season. And what’s more, it should keep us on that upswing well into the future … two of our pitchers … Shelby Scarborough and Lindsay Warger … are only freshmen.”

Adding some varsity-level experience to Deerfield’s mound crew this spring has been Steph Collins, “who,” according to Sherburne, “is the first post graduate we’ve had in our softball program in quite some time.” And the Big Green mentor feels as though it’s been well worth the wait.

“Steph’s probably had the most starts this season,” said Sherburne,  “but I’d say that’s due mainly to her experience. As far as speed, control, and the number of different pitches they can consistently get over the plate is concerned, I’d say they’re all pretty equal.”

In addition to finding her playing elsewhere around the diamond, Elly Stankovits ’16 also owns an arm Sherburne can rely on. Plus, all four rank softball as their primary sport and in Collins’s case, she planning to pursue her career on the collegiate level next year at Division III Sewanee College.

Around the infield, Baldwin, who is headed for Cornell, has been handling the first base chores this spring. Although Baldwin lists softball as her top sport, she plans on hitting the books rather than softballs at the Ivy League school, as she is hoping for a possible future in med school. O’Connor, the Big Green’s second baseman, meanwhile, is bound for Trinity College, where she will play hockey. Amelia Sawyers ’15 is located at short and Scarborough is at third when not pitching. Catching duties have been taken over by Taylor Morash ’16. The outfield features Shai Lineberry ’17 in left, Emmy Latham ’15 in center, and Iodice in right.

With graduation claiming just four of 18 players from this year’s roster, it’s obvious the Big Green’s dugout will be bursting at the seams once again next season, but that should be a good thing: It means whenever the Mercy Rule is invoked, chances are it won’t be on Deerfield.