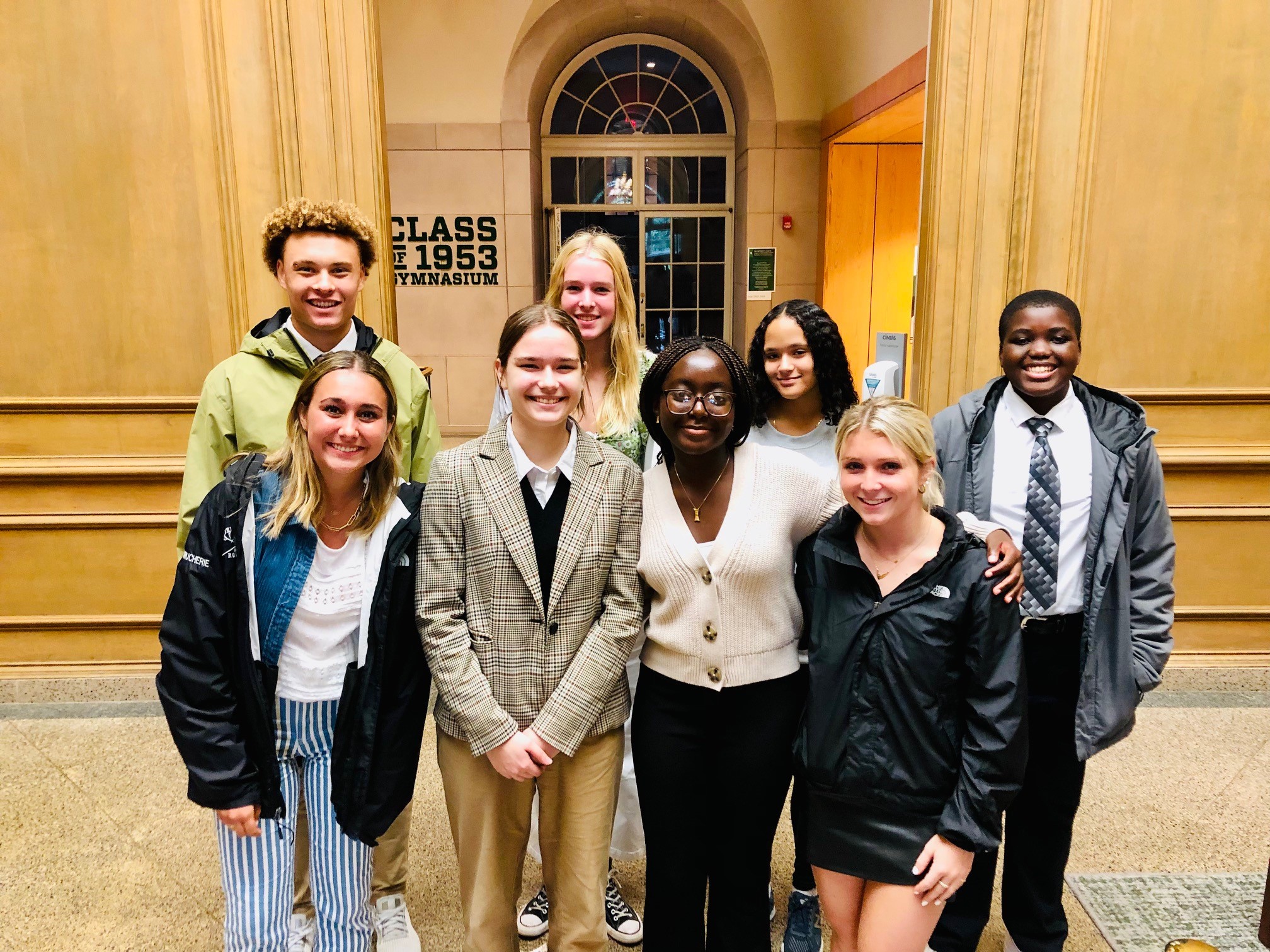 Varsity Field Hockey: Sage Piekarski ‘23
The varsity field hockey DOTW is Sage Piekarski ’23. Sage is one of our co-captains this season and has set the tone for the group with her high-level play and dedication. In one scrimmage and one game, she has recorded four beautiful goals and has been a critical playmaker for the team. She is a quick, talented, and poised competitor and we look forward to her strong play and leadership this season!

Boys JV Soccer: Yesung Lam ’25
Yesung rejoined the JV after a long tryout with Varsity and provided an excellent spark of leadership, possession, distribution, and scoring. In his first practice with us, which can be a tough transition, he was vocal, upbeat, and really strong on the ball. He earned a start in our first game and led the team in the midfield with assertive soccer. He found himself on the end of a great ball into the box from Diego Soto Lopez and finished under the cross bar to solidify a 3-0 lead, which turned out to be the game winner. Hats off to Yesung for being a strong leader when we needed one.

Thirds Volleyball: Mia Calcano ’23
For Thirds Volleyball, we would like Mia Calcano to be the DOTW.  Mia leads the team by example each day.  She guides the team through the daily warm-up and drills, she has a great attitude, she works hard to get better, and most importantly she is always there to give support and encouragement to her teammates, particularly the younger and less experienced players.  In our first game (and win) against Suffield on Saturday, Mia played great in each of the 3 sets.  She was calm and collected and was integral to the team’s success with her solid passing skills, and again with her great attitude.

Theatre: Greta Steever ’24
With her strong organizational skills, and meticulous attention to detail, our stage manager for Radium Girls is the Theater Program’s Door of the Week. Greta’s calm demeanor, and ability to solve issues before they arise allow her to be a highly effective stage manager. Greta galvanizes the company with her effortless blend of authority and approachability. Stage managing a production is not for the faint hearted, yet Greta makes it seem easy. Thank you, Greta, for keeping the train on the tracks!

Strength & Conditioning: CC DesLauriers ’23
For Strength and Conditioning I am nominating CC DesLauriers, She is a senior hockey player who is Attending UVM to play women’s hockey. CC is an individual who comes into every lift with a plan set for the day, she doesn’t waste any time and focuses strictly on the task at hand.  She is a great role model for young women and a hard working athlete.

Varsity Volleyball: Evelyn Kunde ’26
This week’s door of the week for Varsity VB goes to Evelyn Kunde. Another one of the new freshmen this year, Evelyn has been busy learning every position on the court. She has proven herself as a capable outside, middle, right side, and back row player. It is rare to find a player as versatile as Evelyn, especially at her age. Her ability to play any position will be a key factor in the teams ability to adapt to any opponent. She has demonstrated her ability to get kills at key moments, and she is able to back it up with strong defense.

Boys Water Polo: Vedran Gjivoje ‘24
A speedy swimmer and eager learner, Vedran Gjivoje ‘24 is off to an excellent start in his polo career.  He works individually on his skills before and during practice, peppers his coaches with questions about game situations and strategies, sets or matches the fastest pace in conditioning sessions, and always cheers his teammates’ efforts.  As the season unfolds, he’s sure to make some key plays in tight games.

Boys Junior A Soccer: Nikhil Lebaka ’23
The Junior B coaches raved about the leadership Nikhil brought to their squad last year, and out of the gate this fall he has been as advertised. An ever-cheerful presence, he also commits to getting down to work, taking every drill seriously and committing himself to improving his skills. And he’s always ready to go the extra mile by helping to clean up equipment after practice. He’s shown improving in-game intelligence during scrimmages and we look forward to seeing him in action against Taft this weekend!

Girls varsity soccer: Mary Lee ‘23
The girls varsity soccer Door of the Week is senior Mary Lee. To start the season, Mary has willingly jumped into a new position with enthusiasm and a great work rate. Mary brings a consistent work rate everyday and has helped her teammates build possession while working tirelessly to simultaneously to defend and help build the team’s attack. We look forward to Mary continuing to grow in her senior campaign for Big Green. Keep up the great work, Mary!

Boys Jr. B Soccer: John Mandiamy ’25
John Mandiamy is the quad squad DOTW. John scored a pivotal goal against Bement today – his first career score – that helped the team secure a 4-0 win the the season opener.

JV Field Hockey: Ashley LaBrucherie ‘23
Ashley LaBrucherie ’23 is JV Field Hockey’s first Door of the Week. Ashley immediately took on the responsibility of establishing a team culture of positivity, good communication and kindness, actions which were doubly meaningful since she is the only senior on the team. From our very first meeting, both on and off the field, Ashley has led by example, and we could not be more grateful for her leadership!

Varsity Football: Triston Ward ’24
Triston Ward ’24 is the varsity football Door of the Week. In the team’s opening game, Triston had four catches for 70 yards and a touchdown on an 80 yard reverse.  Can’t wait to see Triston who is a dual threat with the ball in his hands!

Girls Cross-Country: Tene Ouedraogo ‘25
Tene Ouedraogo, Class of ’25, has been a stalwart and positive member of the girls’ cross-country team for two years – as manager and occasional jogger last year – and is making great strides, literally, this year: she finished (running every step of the 3km) her first race on Saturday! Not only is she determined to become a contributing member of the team but, as another teammate said about Tene, “she’s a positive force in everything we do.” 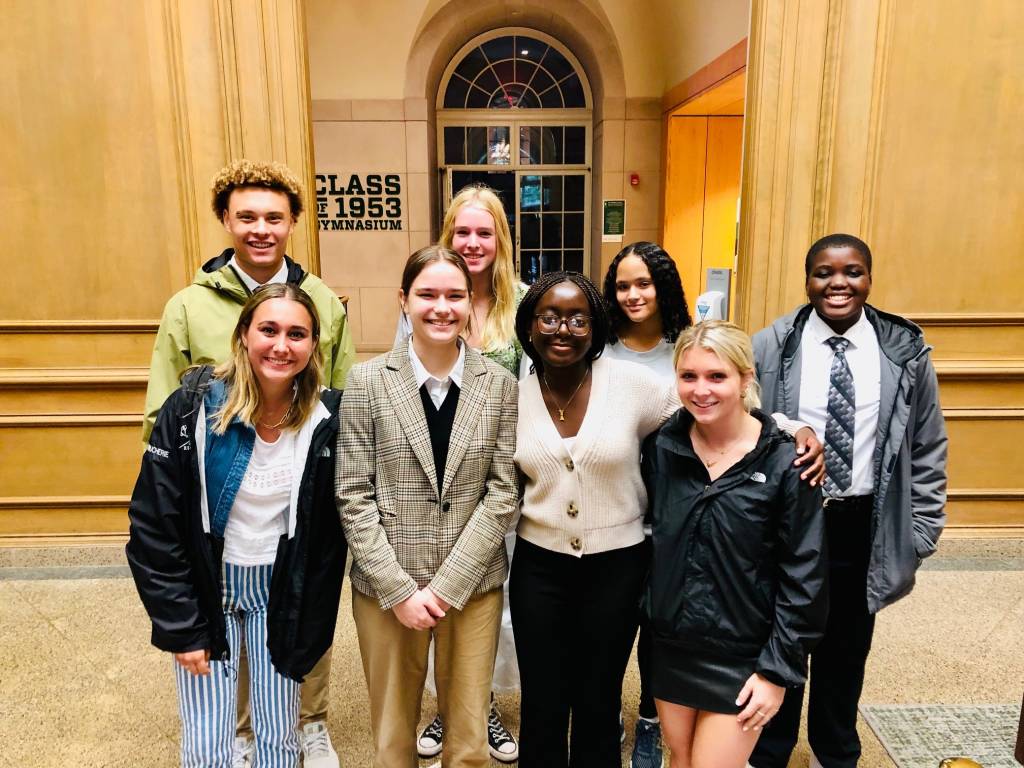