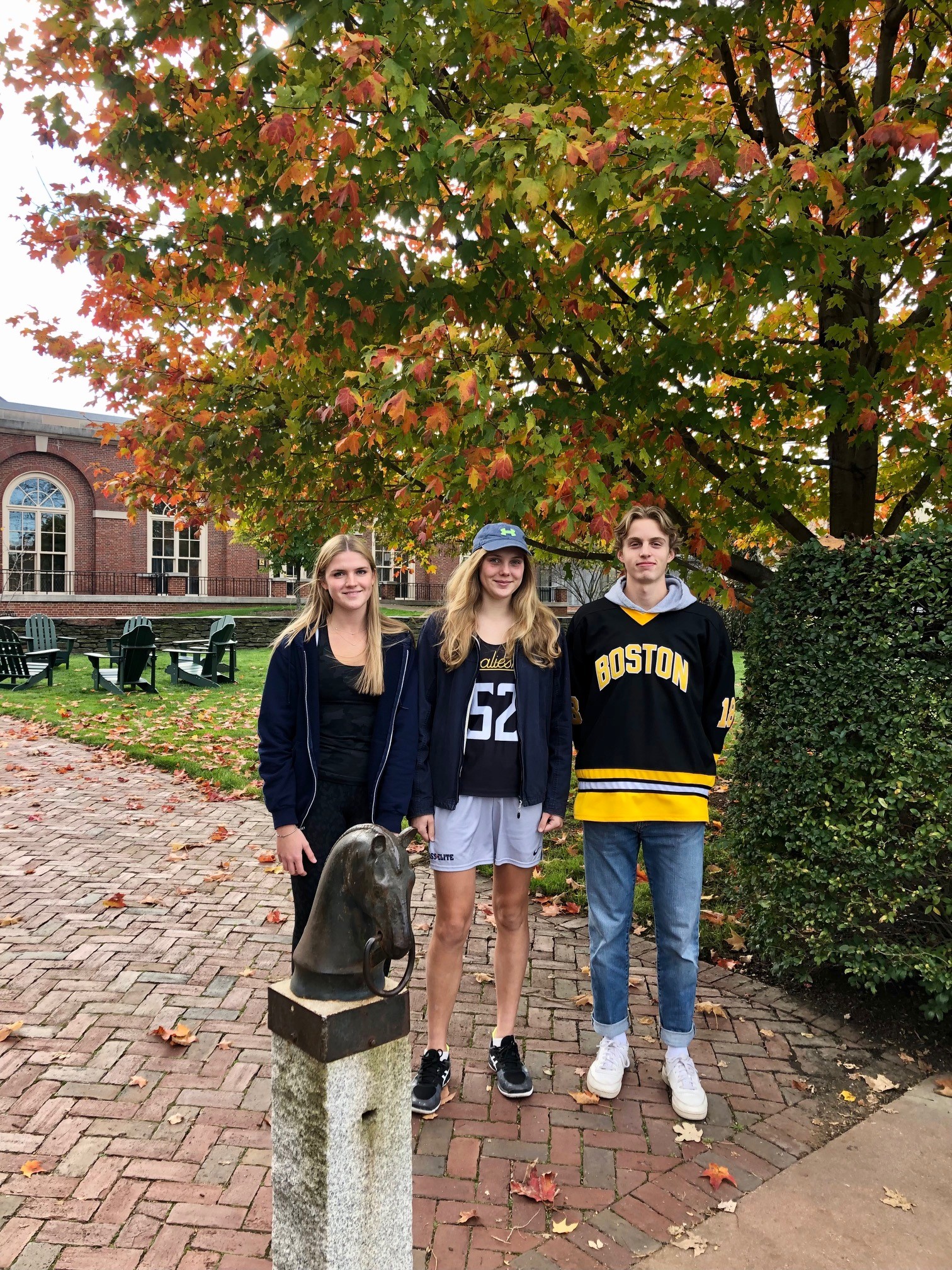 The girls varsity soccer Door of the Week is ninth grade goalkeeper, Ellie Schiller. Ellie has continued to grow in goal every week this season. This week, Ellie faced a lot of action from opponents and was successful in turning away their chances with big saves time-and-time again. She commanded the 18 yard-box, picking up any through balls and was a vocal leader on the field. We look forward to Ellie continuing to grow throughout the season!

Theater Program – Anna Guerrini ‘25
Although new to Deerfield and the Theater Program, Anna (AJ) became a critical member of the team from day one. As the stage-manager of the Fall production Rumors, she is tasked with organizing rehearsal schedules, noting all staging and calling each lighting and sound cue throughout every performance. It is not a job for the faint hearted, but AJ demonstrated her organizational and leadership skills from the get-go, and we could not be more proud of her. Calm, watchful and intelligent, AJ was given a demanding task, and she ran with it without buckling under pressure. Fun, patient, kind and gentle AJ is our rock star stage-manger! Brava AJ!

JV Volleyball: Georgia Ball ’25
This weeks door of the week goes to Georgia Ball. Georgia was forced into a new position this week due to injuries on the team. Her aggressive hitting on the outside translated well to the middle where she was both an offensive and defensive threat. Her blocking, serving, and hitting earned many points in this weeks win against Exeter. She has been a pivotal and versatile player all year. Congratulations.

Boys Varsity Water Polo: Kenan Cakir ’24
After the varsity squad saw a close game with Exeter slip out of reach, the JV team, undermanned because of illnesses and excused absences, took to the pool against a deeper Exeter group.  Playing with a single substitute for most of the game, the JV team competed with determination and resilience, never relenting as Exeter crept ever closer to tying the score in the final minute.  Much of the credit for the team’s success goes to Kenan Cakir ’24, who was the leading scorer and a tireless defender.  He refused to let his comrades down, especially in the pressure-packed moments at the game’s end.

Thirds Volleyball: Olivia Smit ’25
Thirds volleyball’s player of the week is ninth grader Olivia Smit.  Olivia is entirely new to the sport and she has made impressive strides as a server, passer and outside hitter through hard work and dedication.  Every day, she shows up with a positive attitude and a desire to learn more about the game.  She works on all aspects of the game daily, even occasionally stepping up as a setter.  She has become a consistent server and a defensive asset as a blocker.  She has a great future ahead of her in the next three years as a volleyball player!

Varsity Field Hockey: Lauren O’Donald ‘22
The varsity field hockey “Door of the Week” is Lauren O’Donald ’22. Lauren had some big saves in our 2-1 win over Taft on Saturday, including an excellent stop on a stroke. She is a quick, agile, and aggressive goaltender and has proven herself to be a terrific leader for our defensive unit. Her communication is stellar and we love the support that she shows her teammates, both on and off the field. We look forward to her strong play and leadership in the final few weeks of the season – keep up the great work, Lauren!

Boys Varsity Cross-Country: Quinn Hampson ’22
The cross country Door of the Week goes to Quinn Hampson ’22 for breaking a decade-old school record by 21 seconds, along with his personal best by an astonishing 47 seconds. There are so many reasons why this feat deserves accolades (again—Quinn is the fastest runner in the history of Deerfield Academy!), but more than anything else, the coaches laud Quinn’s belief that his training could yield such a superlative result. As DAXC coach emeritus Mr. Schloat loved to say of fast results, “it’s not magic; it’s miles.” Quinn proves that day-in and day-out in practice, and has done so for the last two years. Congratulations, Quinn. You are a hero not only for your extraordinary result, but also for your commitment to the work required to get there.

Girls Varsity Cross-Country: Lila Nottage’22 and Fiona Howes ’23
The DAGXC Doors of the Week are Lila Nottage’22 and Fiona Howes ’23.
Lila is one of our Doors of the Week for her unbelievable sprint in the final moments of the race against Exeter, as well as her sense of humour and willingness to share it. As Lila summitted the rise that leads onto the home straight of the xc course, she strode forth, spurred on by the cheers of the spectators. The gap between her and the Exeter runner ahead of her seemed so large as to make Lila’s catching her impossible, but Lila showed great determination as she powered ahead, catching the Exeter runner in the very last second, as everyone watching held their breath. The day before, Lila had got the team started on their pre-race jog of the course, doing a great job of standing in for an official starter, setting a fun tone to start the practice. Lila has really come into her own in these last few weeks, and we are looking forward to seeing what she does in the last few races of the season.
Fiona is our other Door of the Week for her immense progress, determination, and overall wonderful demeanour. Fiona is always willing to do what is best for the team, racing for the fifth week in a row against Exeter this weekend. In this race, she accomplished her season best time, dropping almost 5 minutes from her first race on this same course at the start of the season! We appreciate Fiona’s love for the area, enjoyment of the natural beauty around us, and consistent support of the team, and congratulate her on an amazing run this weekend!

Boys JV Soccer: Stephen Souder ’23
Stephen has been playing attacking wing from the get go and he has provided sparks in tight games all season. At Loomis, he was beastly in the final five minutes as he possessed the ball through traffic and danced around the defenders, eating minute after minute to hold our 1-0 lead. In the Exeter game, when we were down 2-0, it was his run and deft cross that opened the scoring and turned the momentum in our favor. His late tying goal, when he soared to beat the goalie with his head, was a high point for our team. Despite many chances, this was his first goal of the season and the team went wild. Stephen’s tireless effort, keen understanding of playing on the wing, and positive attitude make him a leader by example and true team player. 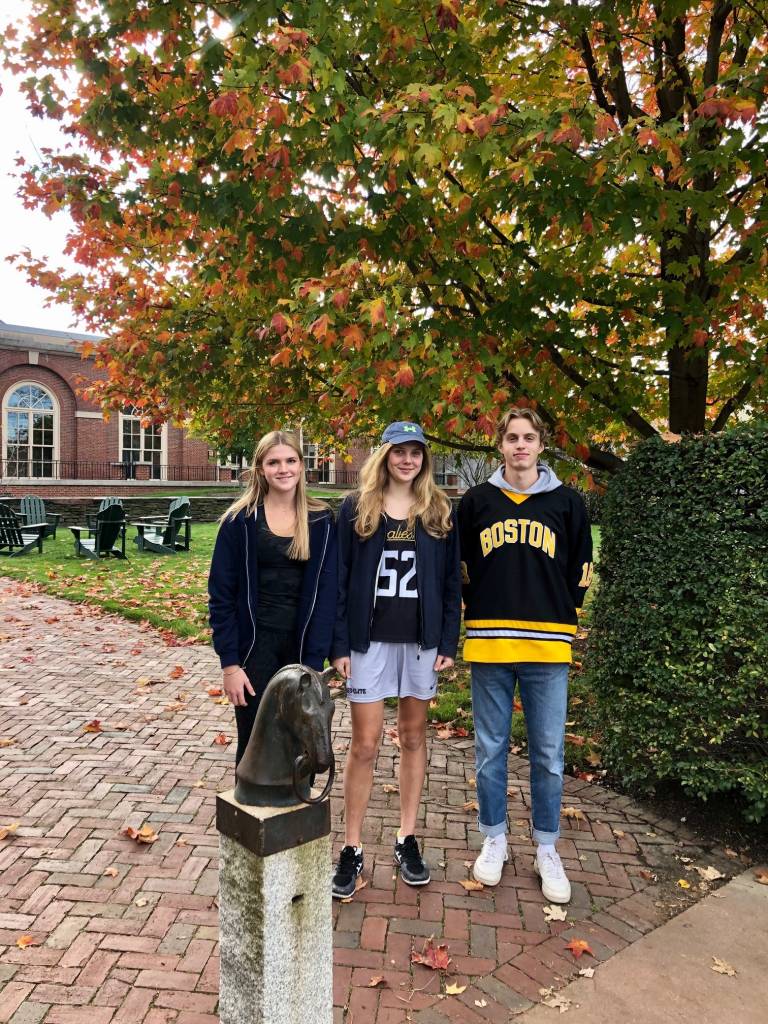