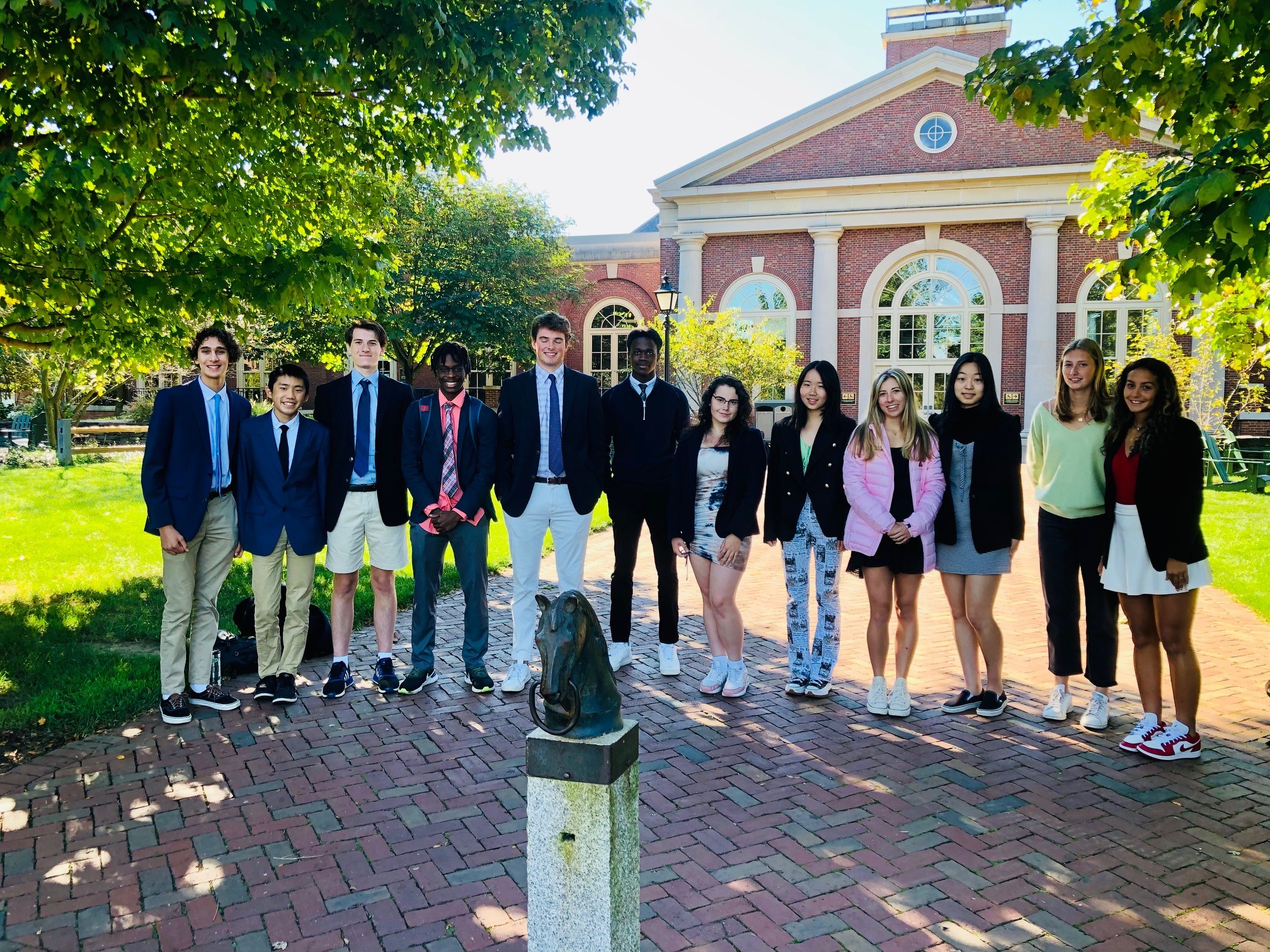 Boys Cross-Country: Max Wang ’25
The Door of the Week from boys XC is Max Wang ’25, who got up before 8am and supported his teammates at the Canterbury Invitational (a five hour bus ride round trip). Despite being unable to race, Max cheered on his teammates all day long, captured excellent race footage, and completed valuable field research for next year, when he will be able to return to the race and take it by storm. For his quiet strength, his commitment to the team, and his positivity, Max is awarded this week’s Door of the Week.

Girls JV Soccer: Charlotte McIntosh ’23
Though many players on the team are deserving, Charlotte McIntosh was the clear choice for JV soccer this week. Charlotte has a huge on-field presence for the Big Green. In our game against Westy she shut down the offense time and time again. On Saturday’s game against Brattleboro she controlled the ball in the midfield and made countless beautiful passes up field that resulted in key opportunities for Deerfield. She should be proud of her hard work and effort for our team.

Varsity Field Hockey: Maddy Zavalick ’22
In a closely fought game at Hotchkiss on Saturday, Maddy Zavalick ’22 seemed to be everywhere on the turf.  Time after time, she appeared in our defensive end to take control of the play, make a save in the circle, or distribute the ball to one of our attacking forwards.  She plays with confidence and skill and leads others by example.  We enjoy all her enthusiasm, humor, and drive, and her teammates appreciate her speed and deep understanding of the game.

Boys JV Soccer: Bob Zhang ’23
Bob’s work in goal was excellent this week. Through 120 minutes he let up only one goal: a chaotic, bounding ball that passed by multiple defenders. He has shown great timing coming out of goal and made his voice heard directing traffic and setting up walls on free kicks. His punts and passes from the back have helped kickstart the offense, and he has shown a good sense for when to slow the game down and let the field players recover. On top of all that, Bob pitched in multiple times carrying equipment to and from the field even though he was not in the group assigned to that task.

Thirds Volleyball: Julia Shulman ’22
The thirds volleyball door of the week is senior Julia Shulman.  Though Julia usually shines as a setter for the team, she was able to help her team secure a decisive win against Stoneleigh-Burnham with her serving in the third game of the match.  Returning to her alma mater, Julia proved she was there to play hard and bring home the win for DA with her consistent play from behind the service line.  She turned in over a dozen serves in a row with several aces in the mix.  Congrats, Julia, and keep up the great work!

Boys Varsity Soccer: Tino Munochiveyi ’22
DOTW is absolutely Tino Munochiveyi ’22. Tino has had an incredible start to the season, scoring five goals in just three games played, including two against Brunswick on Saturday. Tino’s drive, scrappiness, and compete level, sets the example for the rest of the team. He has turned in to one of our leaders and continues to produce on the field. His value to our club cannot be overstated.

Boys Jr. B Soccer: Tysean Price ’22
Our AOTW is Tysean Price. Tysean is a returner to quad squad, but has been injured all season. He surprised us by coming back this week, ready to play. He not only had a good game for us today, but has also done a good job as a senior leader. We’re looking forward to him having a solid season this year.

JV Volleyball: Julia Zhao ’24
This weeks DOTW goes to Julia Zhao. Julia did a great job in our last two games being thrown into new positions. Despite being new to our rotation, Julia helped us in our victory against Worcester Academy, setting for the first time this year. She always has a great energy at practice and is always eager to learn. Congratulations Julia.

Boys Jr A Soccer: Matt Dillon ’23
Matt joined the team last fall as a new sophomore and quickly impressed with his calm focus, steady defense, and commitment to his teammates. Now he’s back, lending the young squad a valuable veteran presence and while also playing a crucial role as one of our starting center backs. He deserves a lot of credit for how little traction the Brattleboro and Taft offenses got in our first two contests, and his finest performance to date might have been in Wednesday’s intrasquad scrimmage, where absences forced him to play alone in the backfield. He hustled so hard, covering so much ground, that one of his teammates at forward didn’t realize their team was shorthanded. Even better than his play is his attitude: he knows how to have fun without losing focus. We’re so glad Matt’s back on our team!

Girls Cross-Country: Victoria Lee ’25 and Kyla Wagstaff ’24
The DAGXC Doors of the Week are Victoria Lee and Kyla Wagstaff for being rock stars at their first ever away competition for DA. Victoria ran her first ever 5k at the Canterbury Invitational this week, and approached the entire event with a quiet determination that served her well as she tackled the infamous Canterbury climb. She was the only 9th grader to race for DA, and she made us all proud! Kyla also impressed with her steadfast attitude as she seemed to take everything in her stride, including pushing through pain to have an impressive sprint at the end. Before, during, and after the race, she kept not only her own spirits high, but ensured those around her felt supported, too. All six of the runners who came to Canterbury demonstrated excellent sportsmanship, and their support of both DA cross country teams was much appreciated. They definitely showcased the best cheering of the day!

Varsity Football: Henry Foster ’22
Henry Foster was the football team’s DOTW for his efforts in the Varsity Football team’s victory over a tough Williston Northampton team.  Henry led a strong defensive effort and was an impact on special teams.  He had multiple tackles for loss and QB pressures which led to turnovers for the Big Green.  We are excited to see Henry continue to make plays this Fall.

Boys Water Polo: Kabir Sheth ’25
Kabir Sheth ’25 played instrumental roles in the victory over Westminster and the one-goal loss in the high-scoring contest against Andover last weekend.  His movement on offense and awareness on defense demonstrated the benefits of committing to full effort on both ends of the pool.  Honorable mention goes to Alex Volkman ’23 and Kenan Cakir ’24, both of whom notched game-winning goals in the final seconds in games against Loomis last week,

JV Field Hockey: Coco De Vink ‘22
We nominate: Coco De Vink ’22, one of our seniors and also a captain – Coco’s consistently energetic approach both to practice and to games, her strong support of teammates, and her always-positive encouragement have earned her a spot as our nominee for DOTW. Congratulations, Coco!

Girls Varsity Soccer: Jasmine Irizarry ‘23
Jasmine Irizarry is this week’s girls varsity soccer Door of the Week! Jasmine has made an immediate impact on the girls varsity soccer team this fall with her joy for the game of soccer, fierce competitiveness and positive energy. With high expectations, she leads by example every day in practice encouraging those around her and implementing coaching feedback. She works tirelessly to feed our attack and works just as hard on the defensive side of the ball to break up opponents’ attack. We look forward to Jasmine’s continued growth this season! 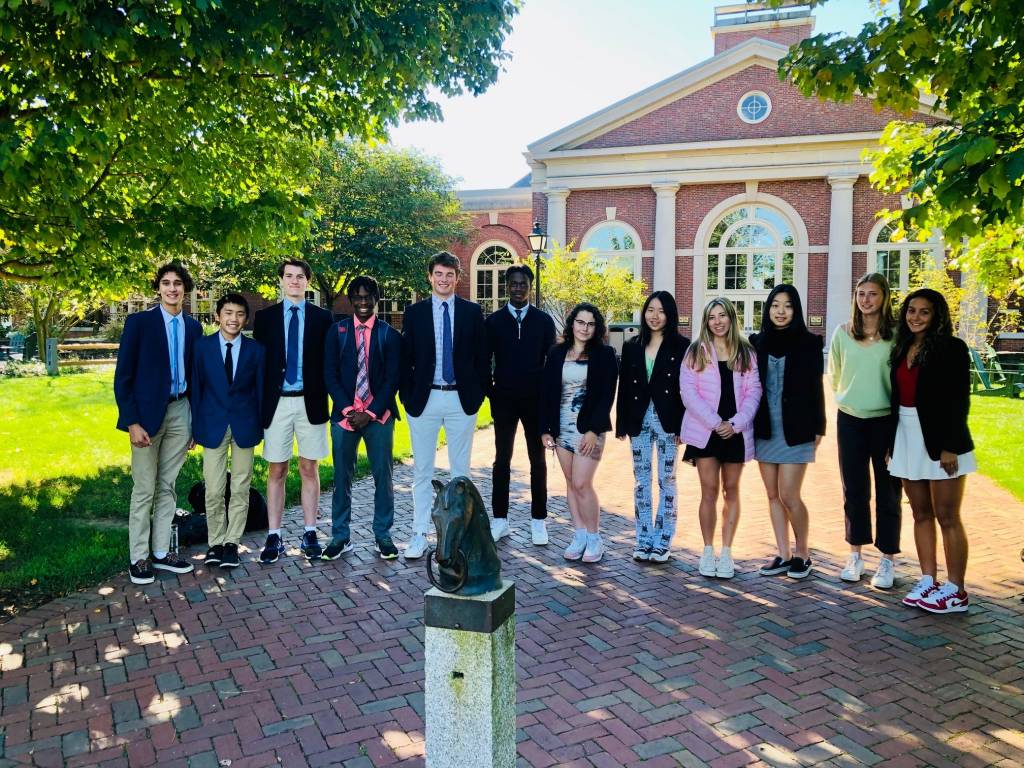