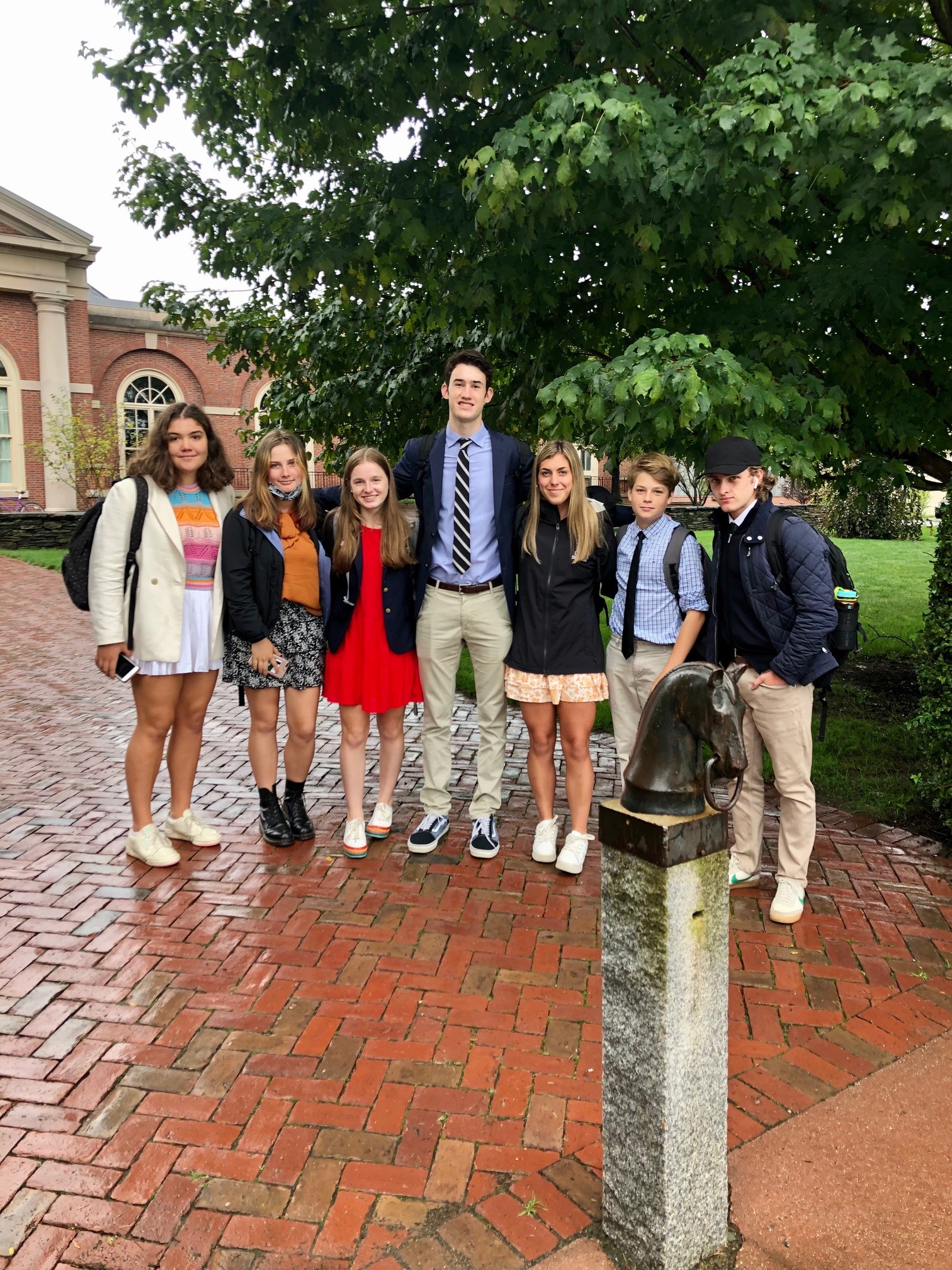 Boys Jr. A Soccer: Kiefer Ebling ’25
The tremendous energy and enthusiasm Kiefer brought to the very competitive JV tryouts didn’t decrease at all when he was sent to the Thirds squad. Nagged by an injury that limited him in practice, he still managed to established himself as a fully engaged member of the team who brings a commitment to work hard and improve himself every day. Although he’s a quick and skilled attacking player, he happily stepped in to help us at fullback in our season opener against Brattleboro. And that cheerful, team-first attitude remained on display as his distracted coaches accidentally left him on the field the first two times they substituted the lines. We feel really lucky to have Kiefer in the fold this fall and his future in the Deerfield soccer program is bright!

Boys JV Soccer: Tomas Cushman ’22
Tomas, a senior who has played soccer throughout his time at DA, emerged as a center forward who understands his roles as goal scorer, distributor of the ball, and a nuisance to the opponent’s back line. In our victory at Suffield, he presented himself to the midfield as a passing option, took corner runs for the wingers, and looked for others around him to rip a shot. His attitude and approach to his position made our side much more dangerous and dynamic. He also put home two handsome goals to help us secure the win.

Varsity Field Hockey: Sage Piekarski ’23
On Saturday, the Varsity Field Hockey team traveled to the Berkshire School to play a closely matched season opener.  The Deerfield team was able to claim their first win of the season, after a back and forth game that matched two strong opponents.  At the end of 62 minutes, the Doors had won 3-2.  Sage Piekarski played a part in each of the three goals tallied for Deerfield.  She had a key part in each of the successful offensive pushes and tallied her own goal when she sent a ball to the back corner of the net.  Her leadership at center forward and experience playing on attack is helping to shape this year’s offensive line.

Girls Thirds Volleyball: Allison Kostiuk ’25
This week, thirds volleyball would like to recognize Allison Kostiuk for her outstanding performance in our first match of the season.  She was called upon to serve on several occasions, and she showed poise and consistency every time.  She took the score from 12-9 to 25-9 on 13 straight points, including several aces, while holding serve in the third and final game.  She has been working hard on her serve for the past two weeks, and her focus and determination paid off!

Girls Varsity Soccer: Sara Robert ‘22
Sara Robert is this week’s girls varsity soccer Door of the Week. In the Big Green’s home opener on Saturday, Sara played a big part in the success of our team’s defense who earned their first shut out of the season against Milton. Sara works hard every time she steps out on to the field and is eager to continue to grow as a player in the outside back position. We look forward to her continued relentless hustle and growth throughout the season!

JV Volleyball: Olivia Konar ’22
This weeks door of the week goes to Olivia Konar, who has been tireless in her efforts to improve. Often the first in the gym, she has been taking time before during and after practice to hone her setting skills. Her efforts have yielded a solid improvement in practices so far. Olivia always leaves everything on the court, and we can’t wait to see her compete. Congratulations Olivia.

Boys Water Polo: Wyatt Browne ‘22
On the opening weekend in which our seven starters made their varsity debuts against Choate or Brunswick, Wyatt Browne ’22 maintained his poise in the goal even as an inexperienced defense left him open to counterattacks on multiple occasions.  Instead of criticizing his teammates, Wyatt encouraged them, guiding them into better positions and heightening their game awareness.  Though the team fell short of victory in both games, every player gained valuable experience, and Wyatt will join with the other seniors in assuring their younger peers that better days lie ahead.

Boys Jr. B Soccer: Joe Berman ’25
Our AOTW for this week is Joe Berman. Joe is one of our most versatile players, starting at keeper but also logging minutes at forward. He works hard, no matter where he’s playing on the field, and has a great attitude at practice. Despite being one of the more experienced players, he never stops hustling and trying to improve his game.

Boys Cross-Country: Jackson Collins ‘23
Jackson Collins ’23 for his inspired race in the 3k event at the Brush Invitational. He ran a smart race by tailing the leaders all the way to the finishing sprint, when he mounted a ferocious charge that saw him take the lead for a few strides. His opponent from Eaglebrook may have found another gear at the final few steps, but Jackson’s effort is illustrative of the type of racers DAXC have become: relentless, brave, and eager for the challenge.

Girls Cross-Country: Daisy Fitchthorn ’23
The door of the week for the girls cross country team this week is Daisy Fitchthorn for her dedication to helping the team, even when battling her own injuries. This is Daisy’s second year on the xc team, and she consistently brings a steely determination and positive outlook to practice. This last week she sprained her ankle, but still managed to be one of the MVPs of the Brush Invitational meet held on Saturday, as she helped to make sure all the finishers got accurate times, as well as supporting not only her own team, but all of the runners. Daisy was the epitome of sportsmanship, and we are grateful for her help in making Saturday such a fun and successful day!

Varsity Football: Nick Peltekian ‘22
Nick Peltekian a PG running back and strong safety from Mahwah, NJ led the green to a fast start in his home state for a big win. Nick broke TD runs of 69 and 40 yards along with another TD reception where he ran over a Lawrenceville defender.  Nick has been all over the field this fall and we are excited to see more of him this season. 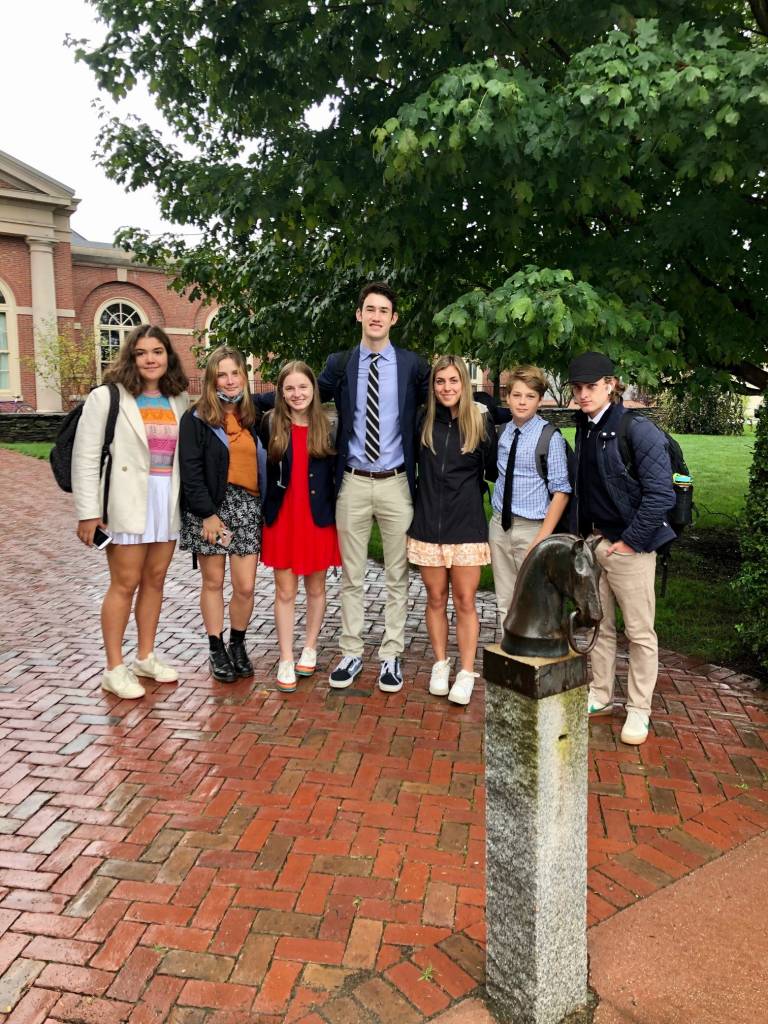