This past weekend, Deerfield Girls Varsity Swimming and Diving (DAGVSD) won their first New England Championship in 17 years!   The girls outdid themselves clocking a total of 39 “personal-best” times in 15 events. 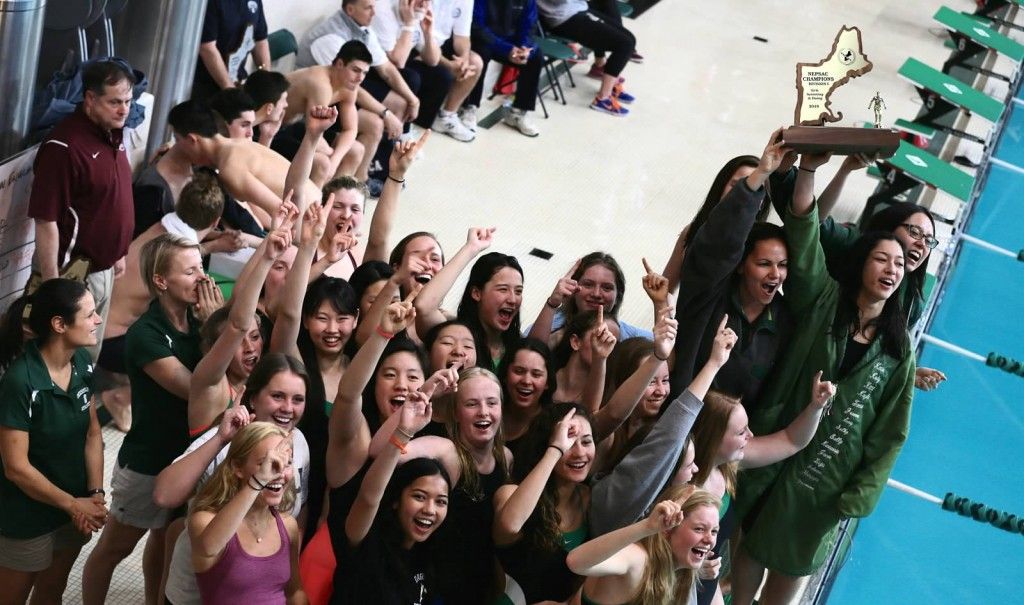 DAGVSD entered New England Championships as the fifth seeded team. After an outstanding day at diving championships, in which Ellie Uhl placed second overall, earning a new school record with 484.30 points, and Maggie Kidder placed third, by a single point, with a total score of 382.05 points, Deerfield Girls entered the weekend’s swimming championships in first place.

Saturday’s individual swimming trials were full of exceptional performances; based on the number of girls that finished in the top 16 in their respective events, we were likely approaching a top three team standing (though point tallies aren’t officially taken during Saturday’s trials). On Saturday evening we gathered to acknowledge the great swims of the day, support those who made finals heats and announce relay configurations (relays are only swum as part of the finals line-up). Relay events are worth twice as many points as individual events.

Sunday morning the Deerfield girls were off to a strong start with our 200 Medley Relay. Rhyan Brode, Ashley Chang, Bailey Smith and Shenika Shi worked together to take third and broke the school record with a time of 1:49.93.

We didn’t medal again until event #11, with Bailey Smith taking third place in 100 butterfly, with a time of 57.62, just narrowing missing the school record. Mary Mack Brown followed up by taking second place in the 500 free with a time of 5:12.23. The first half of the meet flashy for DAGVSD in terms of medals earned, but Deerfield consistently had multiple girls place in the top 16 in every event. Because we often took 4th, 6th and 10th, or 5th, 6th, and 12th, we continued to hover in the top three of overall team standings.   By the end of the first half of the meet, Deerfield was again in first place by the thinnest of margins.

The second half of the meet started off with the 200 free relay. Deerfield’s “A” relay was seeded 7th going into the meet. With outstanding swims from Ellie Koschik, Mina Liang, Kaity Jia and Shenika Shi, the relay ultimately took second place on the podium. We placed well in 100 backstroke – but so did our closest competition. The last individual event was the 100 breaststroke, where Ashley Chang, who had broken the school record the day before with a time of 1:06.81, took third place.

Whether or not Deerfield took home the title was dependent on the final 400 free relay. Deerfield’s biggest competition, Greenwich Academy, came into the weekend with the first place seed in the 400 free relay. If Greenwich took first place, Deerfield would have to place 5th or better to win the meet. Our relay was the 9th seed – not even making it into the final heat. Mallorie Hsu, Mina Liang, Ellie Koschik and Bailey Smith were tasked with racing the clock and hoping for the best while the final heat took place. The crowd was electric during the final two heats of the meet knowing what was at stake. Deerfield clocked a time of 3:34.05, fast enough to place 4th overall. We won! WE WON!!! The crowd erupted with excitement as the girls embraced each other and cried tears of joy. The win was truly a team effort. We fought for it to the end. Deerfield Girls Varsity Swim and Dive’s first New England title in 17 years: it’s ours!