Athletics Week in Review: April 26 to May 2 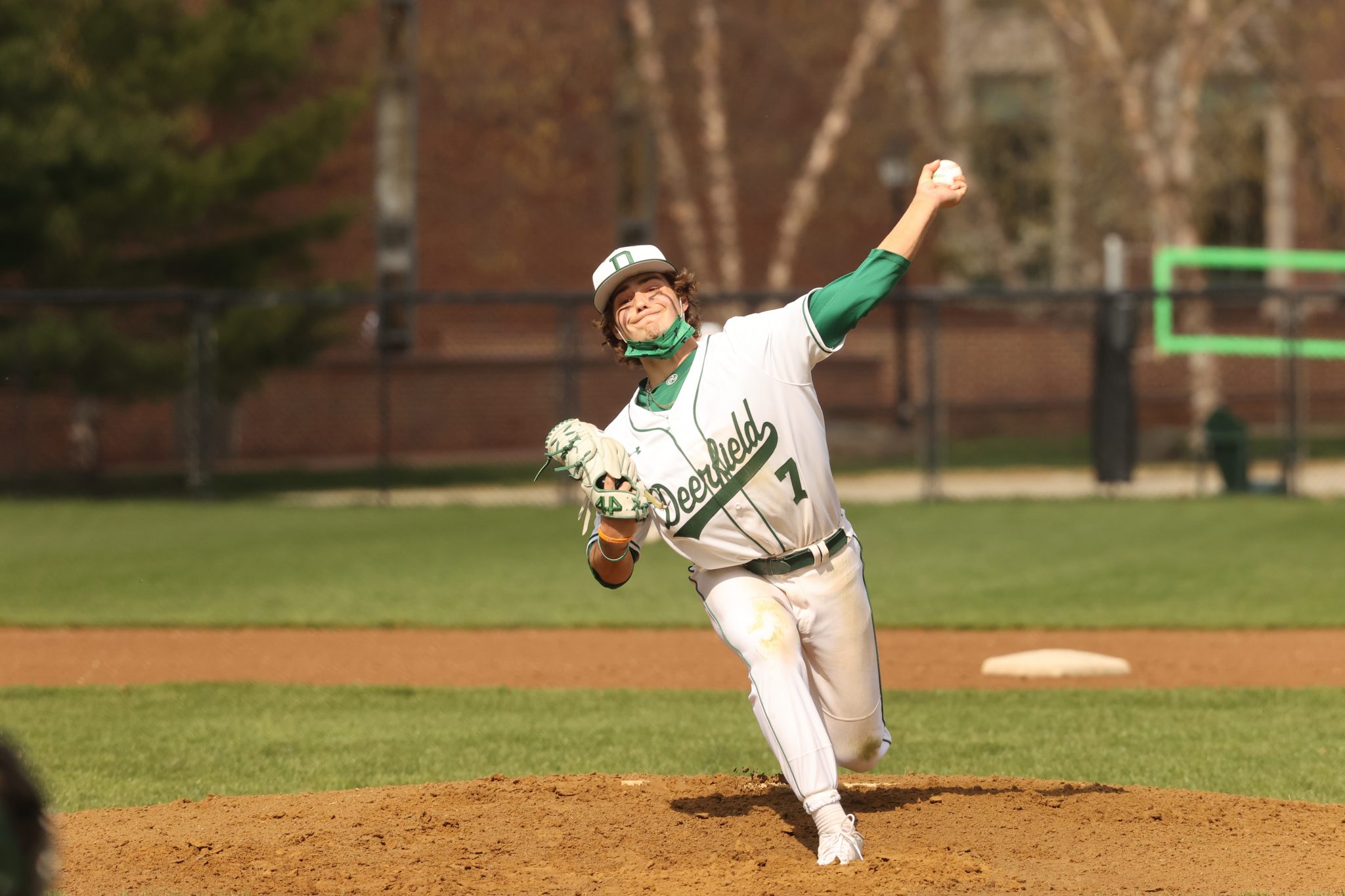 A great week for the Big Green! The Doors posted a nearly perfect record in this past weekend of games.

Girls JV Tennis:
Deerfield: 4                Berkshire: 3
On this beautiful sunny day, Deerfield hosted Berkshire in our first home tennis match since 2019. Everyone was thrilled to play and we got all 12 players a good match. We played 4 singles and 3 doubles with 1 exhibition doubles. The team showed a gritty competitive spirit, called the lines well, and supported each other from the sidelines. Several faculty, students, and parents were in attendance too.

After Saturday’s victory against Berkshire, we have a week without a match. We’ll do some challenge matches when the weather permits and some fitness work when the courts are wet. The captains of Coco da Vink, Kylie Kittredge, and particularly Ainslie Kell have shown great leadership of the fitness effort. This is a great goup. We also have our team picture this week!

Boys JV Tennis:
The JV boys opened with a successful weekend against our neighbors up the hill. Battling tough opponents, and even tougher conditions, the team managed a solid win on Friday winning two out of three doubles and four out of six singles. Robbie Hua and Kai Darrel were a dominant duo winning decidedly in both of their matches.  The play was much closer on Saturday as Eaglebrook put up a difficult challenge winning half of the singles matches.  Yet doubles made the difference as Deerfield swept those matches decidedly.  Alexander Grosse and Fred Chrysler played together for the first time, the found great chemistry from the onset as they cruised to an easy victory.  The team is looking forward to our next matchup vs. NMH next Saturday.

Boys Varsity Tennis:
The boys varsity tennis team got another win under its belt defeating The Berkshire School 5-2 in Sheffield, MA. The win puts the team at 2-1 overall on the season.

Doubles was once again strong for DA with wins at all 3 slots. The #1 team of Sarachek/Ueland took down their opponents 8-1 to remain undefeated on the season; #2 Noah and Oscar Depp had a strong 8-2 win; and Peh/Park also won 8-2 to log their second consecutive win at #3.

Down two players in singles due to injuries (#1 Sarachek and #6 Oscar Depp), the Green fought hard and won 4 out of 6 singles contests. #1 Ueland and #2 Peh cruised to easy victories while #3 Noah Depp fought hard but ultimately lost 6-2, 6-4. Making their singles debuts were #5 Yongjin Park and #6 Freddy Manning; Freddy pulled out a win 6-4, 6-3 using pace and smart court sense to defeat his opponent, while Park staged a big comeback in the second set but ended up losing in the deciding third set tiebreaker 10-6.

The most exciting match of the day came from #4 freshman Blix Salz. Salz battled a consistent and dropshot-loving opponent and, with all eyes on him in his third set superbreaker, pulled out a 7-6(4), 4-6, 10-8 victory.

The team next takes on Westminster at home on Wednesday, May 5.

Boys JV Lacrosse:
Deerfield played a great game against Eaglebrook today, winning 12-8 against the team. Drew Garzone ‘23 earned the game ball after leading the team on the field to victory. The lead scorer of this game was Ollie Hemphill ‘23 making 4 of the 12 goals. Stone Anderson ‘23 played exceptional defense as well.

Deerfield gained another win, this time against Berkshire. With a final score of 12-5 it is clear the team came ready to win. Our defensive players were the stars of this game, with goalie Ryan Amundson ‘24 making a spectacular 7 saves, and defenseman Alex Fontecchio ‘24 successfully halting any attempts made by the other team to score. Ollie Hemphill ‘23, Will Scharfenberger ‘23, and Spencer Gallant ‘22 scored 3 goals each today.

Deerfield’s varsity tennis girls were back on the courts Saturday with visiting Berkshire. The team delivered a well-rounded effort and logged wins at every position. The team’s played a no-repeat format so that ten players from each side competed.

Olivia Waterfall had a hard-earned win at third singles. The first set came down to a tie break which Olivia won 7-3. During the second set, she found her rhythm and began hitting winners to compliment some great first serves. Another singles highlight was a dominant second singles win from Hunter Pulliam, her first singles victory for Deerfield!

The doubles match-ups also went Deerfield’s way. Congratulations to Kiki Brainard, Alex Kelsey, and Linnea Dreslin on their first career wins for Big Green. The weather cooperated and both teams demonstrated great character on a great day of tennis.

The team sets its sights on midweek play with a trip to Simsbury, CT to take on Westminster this Wednesday.

Varsity Baseball:
Deerfield secured its first win of the season at home by a score of 11-4.  C Trey Bourque continued his hot start, going 3-4 with 3 RBI.  LF Tynan Creagh was 2-2 with an RBI and SS Ryan McHugh had 3 RBI on the afternoon.  In total, the Deerfield lineup had 12 hits and drew 4 walks.  SP Kiernan Keller went 5 innings and allowed 5 H, 4 ER, and struck out 4 batters.  RP Henry Foster came in for 1 inning and struck out all 3 batters he faced.

Deerfield completed the weekend sweep of Berkshire by a score of 7-3 on a windy day in Sheffield, MA.  LF Tynan Creagh had his 2nd straight multi hit game and also had an RBI and SB.  SP Tyler Mudd threw 5 innings and allowed only 3 hits and struck out 8 batters.  He was also 2-4 at the plate with an RBI.  RP Tommy Leimkuhler came in relief and threw 4 innings and struck out 7 batters.

Girls Varsity Lacrosse:
This past week, the girls varsity lacrosse team had the opportunity to compete against Phillips Exeter Academy and Berkshire School in back to back contests.  On Wednesday, the Big Green suffered a defeat against a strong and talented Exeter squad.  In that contest, Exeter dominated draw control possessions, and Deerfield found themselves on their own defensive end for a significant percentage of the game.  Determined to finish up strong, The Deerfield girls executed their best play in the final 7 minutes of the game.  Against the Berkshire bears, Deerfield put together two strong performances by demonstrating improved transitional passing in the midfield and great hustle on the draw.  Over the course of the weekend, Deerfield scored 30 goals and came away with two victories.

Girls JV Lacrosse:
JV Lacrosse spent much of last week preparing for our game against Berkshire on May 1st. We learned new offensive plays, practiced taking the draw, and worked on defensive double teams. All of the team’s hard work paid off with a win in our first game of the season, beating Berkshire 7-4! Our midfielders fought hard for ground balls and made some beautiful transitions up the field. The goals were netted by Grace, Fife, Sophie, and Amelia from feeds and well-timed cuts. Our defense held up on their end, too, led by captains Lisa and Emma. Maria and Stella both made some impressive stops in goal, including blocking a few of Berkshire’s free positions. We are looking forward to another week of practice to prepare for our next contest against Loomis Chaffee on May 11th!​

Girls Varsity Track & Field:
Deerfield track and field had a wonderful meet while traveling to Berkshire Academy. While the weather started a bit chilly, the sun came out and warmed up the track as the day progressed. While we had some new athletes joining us, many of the girls’ track and field team came to this meet with more confidence after getting a meet under their belts.

The Big Green started the meet well with the field events. We swept in the pole vault with Josephine Louis, Sydney Dinkins, and Aly Gonzalez taking the top three places. Jo and Kate Kelly came out strong in their first time competing in the long jump, scoring first and second respectively. Kate and Jo shined again in the high jump with Kate scoring second and Jo placing third. Jaxon Palmer once again took first place in the javelin. On the track, Simi Lawal came out in the 100 and 200 races, scoring top 3 in both events. Maddy Slater was able to participate in both hurdles events this week. She and Anna Zusi scored in the top 3 in both events, earning big points for Deerfield. Jaxon Palmer came out on the track earning the 2nd spot in the 400 with newbie Bronte Levin close behind getting the 3rd spot. On the distance team, Grace Russell came back to competition and earned a 2nd place spot in the 800 and Aerin Lo bravely took on the 3000 meter race as the only girl in the event.

Just as at Andover, all of the athletes came out ready to compete and gave each event their all. Every athlete on the girls’ track and field team has something to be proud of from the Berkshire meet. Although we lost by a mere 5 points, our team was enthusiastic and should be extremely proud of themselves. We are looking forward to two home meets to finish out the season!

Boys Varsity Track & Field:
For the first time in staff memory, the Deerfield Track & Field team made the journey to the Berkshire Academy track on Saturday, May 1, to compete beneath an imposing line of mountains situated behind the school’s campus. The team arrived to temperatures in the 40s with stiff, gusty winds. Fortunately, as the meet progressed, the weather improved, and the team’s efforts concluded in warmth and sunshine – as well as an 85-53 team victory!

Once again, athletes made new entries into the school record books, notably Elic Ayomanor ’22 moving into the Top 5 in the school’s Long Jump history, Quinn Hampson entering the Top 10 in the 3000 Meters, and the 4×100 Relay team (with new addition Christian Reavis ’23) breaking into the Top 10 as well.

Our squad felt a sense of promise coming out of the meet against Andover, and delivered on that promise at the outset of May. With two home meets remaining on the schedule, Deerfield will look to incorporate all athletes into competition in the weeks ahead, and to build on the weekend’s success. 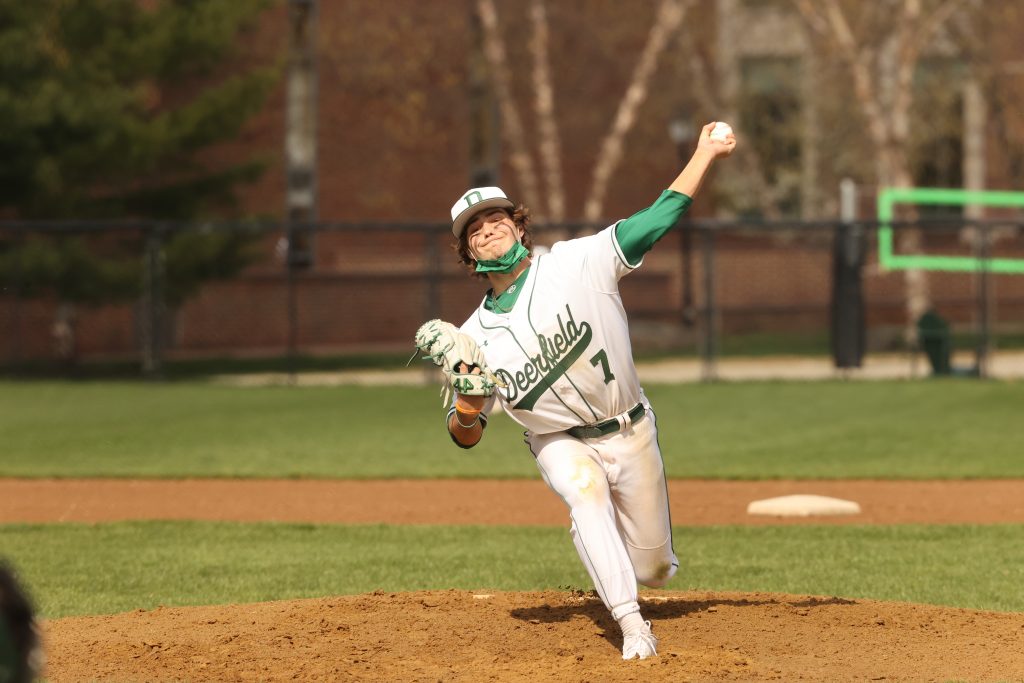