The girls’ varsity hockey athlete of the week is Kelly Howe. Kelly is someone who comes to the rink every day with a positive attitude and great work ethic, doing whatever is asked of her, and putting the team first. This season she’s stepped into a key role for the team, and has been very successful due to her hockey IQ and work ethic. This was especially evident in our game against Pomfret, where Kelly was (as usual) in the right place at the right time, and knocked in two great rebounds in the first five minutes of the game. Her goals completely tilted the energy toward Deerfield, enabling us to eventually win 5-2. We look forward to Kelly’s continued positivity and effort in our remaining 7 games!

Kylie Kittredge earns Athlete of the Week honors this week for her gutsy performances against Eagle Hill and Bancroft.  She began the meet with a season best swim in the 200 free and 15 minutes later dropped 2 seconds in the 100 free.  Kylie also swam her best time in the 50 free as part of the 200 free relay and wrapped up her day with another strong performance in the 400 free relay.

JV swimmer Ismay Anderson earns Athlete of the Week for her stand out work.  Despite feeling under the weather, she swam a blazing 50 butterfly in the 200 medley relay and followed it with season best times in the 100 freestyle and 100 breaststroke before finally anchoring the 400 free relay.   This kind of determination makes her an outstanding member of the JV team.  We hope she feels better soon!

This week we would like to honor senior Jane Mallach.  She comes to practice every day ready to work hard and help her team succeed.  Her positive energy and encouragement of her teammates contributes to our strong sense of team unity, especially during tight games.  In the last two games she has played in against Williston-Northampton and Hotchkiss, she has scored a 3-pointer within minutes of hitting the floor.  She practices getting her shots off quickly in practice daily, and it paid off in both of those games.  Everyone on the team appreciates Jane’s support, hard work, and steadying presence day in and day out. 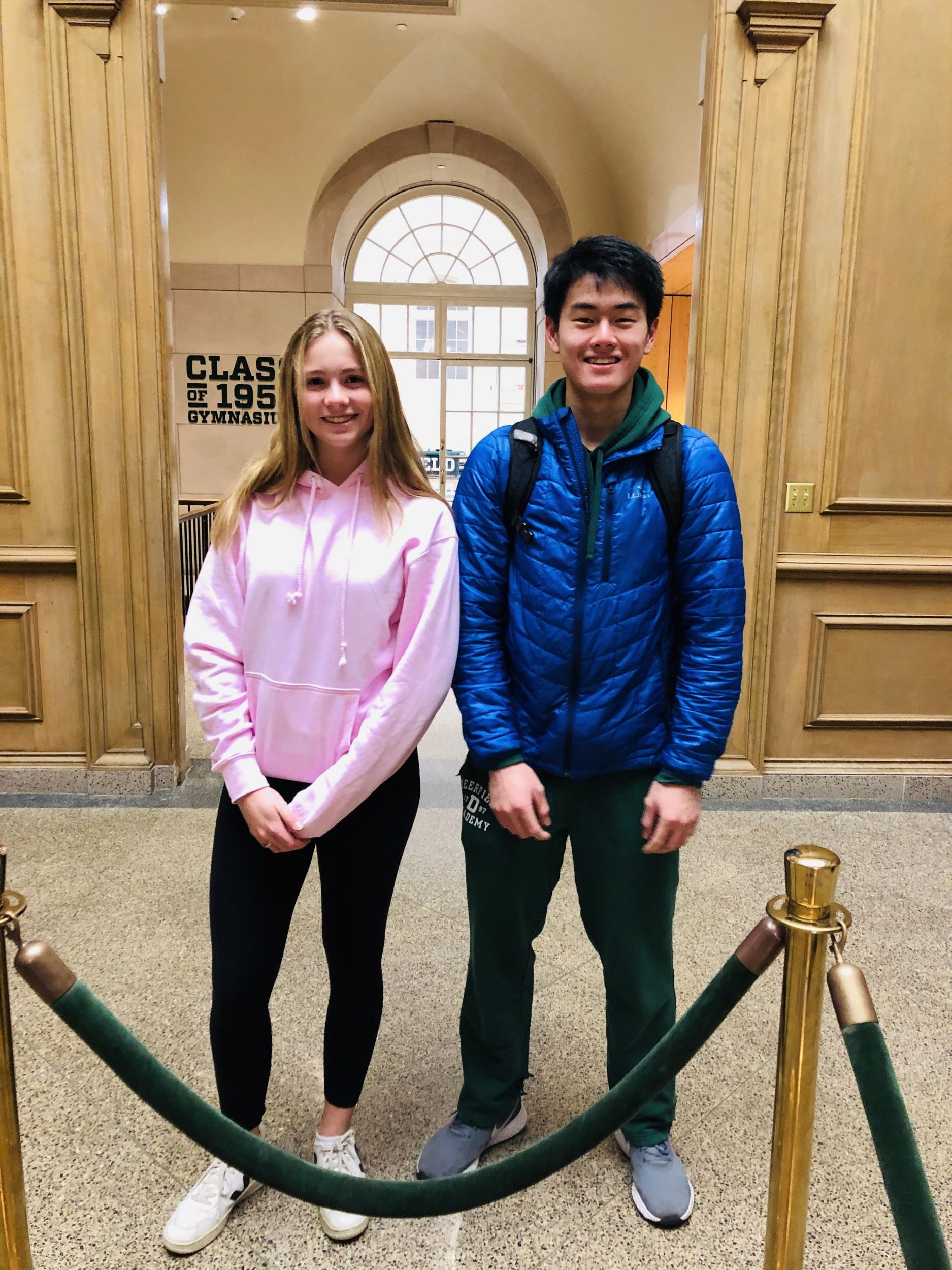 This week’s Athlete of the Week for the boys’ JV hockey team is Alex Leong. Alex was instrumental in the team’s success last week against two tough opponents. On Wednesday Jan. 29 the team defeated a talented Cushing Varsity “B” 3-0. It was Alex’s first shutout of the season and his play was outstanding. Then on Saturday February 1st the team hosted an undefeated Hotchkiss and won again, this time by the close score of 3-2. Alex provided the team a steady backstop between the pipes to allow for a hard-fought team victory. Alex is one of the first on the ice and one of the last to leave and is the consummate team player always looking to raise his teammates. As we get deeper into the season Alex, along with some other older members of the team, have really done a good job providing leadership with a team-first approach to things every day he comes to the locker room. Well done Alex!

Last Saturday, girls JV basketball hosted Hotchkiss Academy. Hotchkiss came into Deerfield undefeated and was loaded with athletes. Our signature statement this year has been  rebounding as evident to our 10-1 half time lead.  Deerfield sent Hotchkiss back home with their first loss with an impressive 22-7 victory!

In the second half Meg Holland controlled the floor on both ends of the court. While Hotchkiss attempted their full court press, Meg dribbled through their team, made sharp passes and scored key baskets (one being a 3 pointer). As a 9th grader, Meg has a keen sense of the court and the game! Congratulations Meg – well done!

The Girls Thirds basketball player of the week is Aurelia Bolton ’22. Aurelia is a consistent positive force on the squad of Deerfield “ball3rs”. She is frequently the first girl in the gym and has shown tremendous improvement on the defensive end. She is one of our rocks in our staple zone defense, always in the right spot at the right time, frequently grabbing double digit rebounds. On the other side of the court, Aurelia is developing confidence in her shot and a better sense of off-ball movement. When she is on the court, good things happen. Way to go Aurelia! 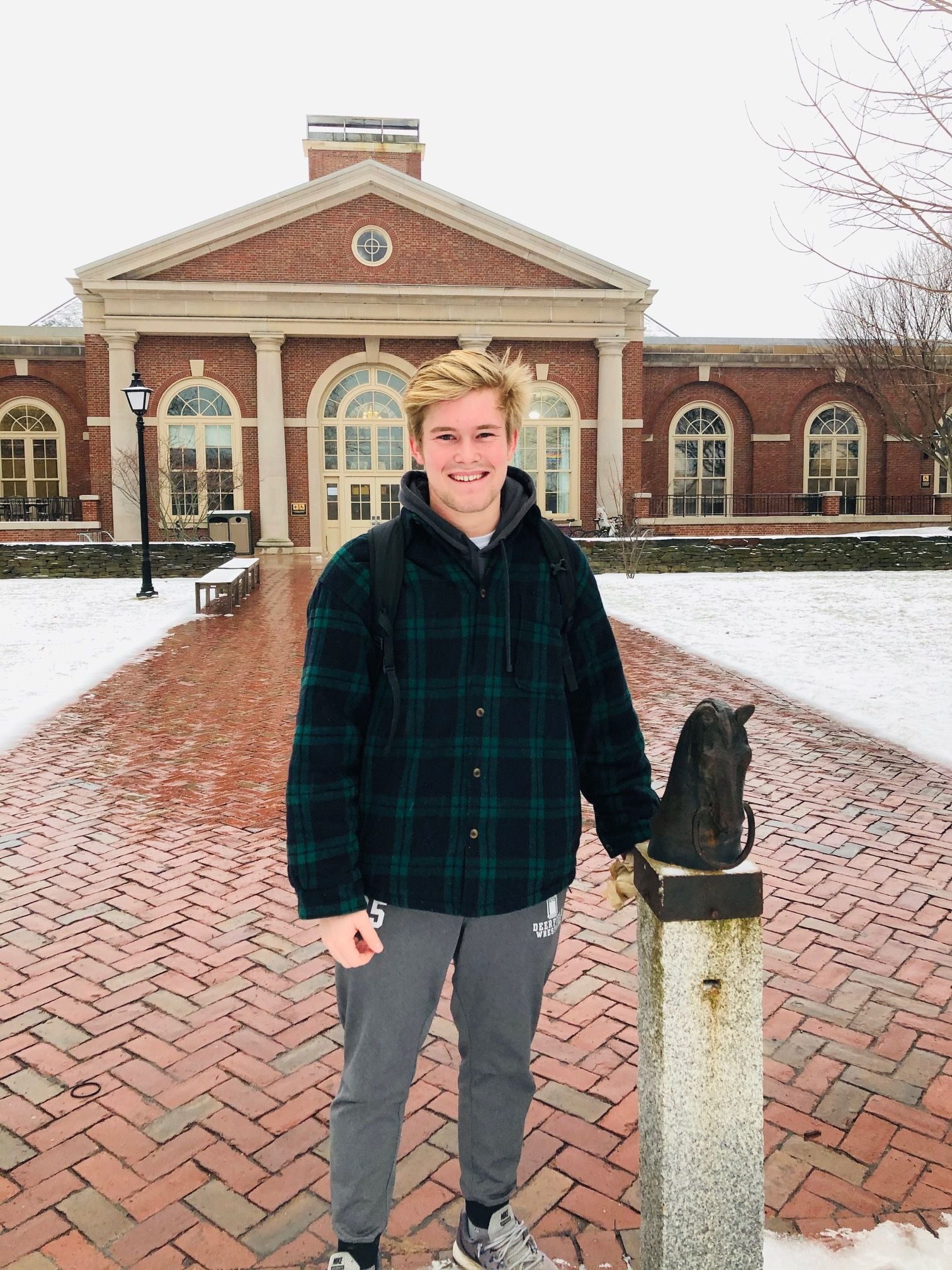 The Varsity Wrestling athlete of the week is Elliot Flagg. Throughout the season, Elliot has set a high bar for both himself and his teammates. He never fails to cheer, inspire, and encourage; he’s a culture maker of the very best kind: fraternal, attentive, and generous. From day one, Elliot asked the most of his training partner. Under his intense and determined guidance, every wrestler he works with walks away a more adamant competitor and a more resolute teammate. Elliot’s season on the mat was mixed, though his tenacity never wavered. But now, nearing the end of the season, we’re proud to report that he’s still in the game. At the recent Class A Tournament, Elliot wrestled the best matches of his season, finishing 4th in his weight class and qualifying for the New England Tournament on February 15th. We’ll miss Elliot next year. He’s been an essential aspect of the DA wrestling experience; his influence will be felt for years to come.

As the lone senior and one of the few returners on the team, Raheem is our unofficial captain and team leader. He brings a great attitude to games and practices and has been great about helping some of the newer players on the team. As the season winds down, we’ll miss his presence and leadership next season.

Coming into the season with almost no squash experience, Valentina has been a very quick study. She’s learned to harness her power and quickness and deploy them effectively thanks to great decision-making. Her natural abilities put her at fifth on our ladder to start the season. Since then she’s won every challenge match she’s played, culminating in her taking over the #1 position this week. On Wednesday at Williston, in her first interscholastic match as our top seed, she dispatched her opponent quickly in straight sets. It’s been especially fun watching Valentina’s rise because of how humbly and cheerfully she carries herself, win or lose. We’re lucky to have her on the team.