The boys jv baseball team would like to nominate Chijioke Achebe for our AOTW. Even when he is not in the game Chiji always finds ways to help his team. He put together walk-up songs for all his teammates and kept score meticulously in both games last week. Against Williston, Chiji battled at the plate and earned a walk before stealing second base successfully and then unfortunately getting tagged out on his way to third. Chiji has a great attitude and helps bring his teammates together.

Softball’s athlete of the week is Mia Burch. She has been crushing the ball and had two triples and a double in the last few games. She also made a game saving catch against Miss Porter’s. She’s consistent in the field and in the batters box which is why she’s our athlete of the week. 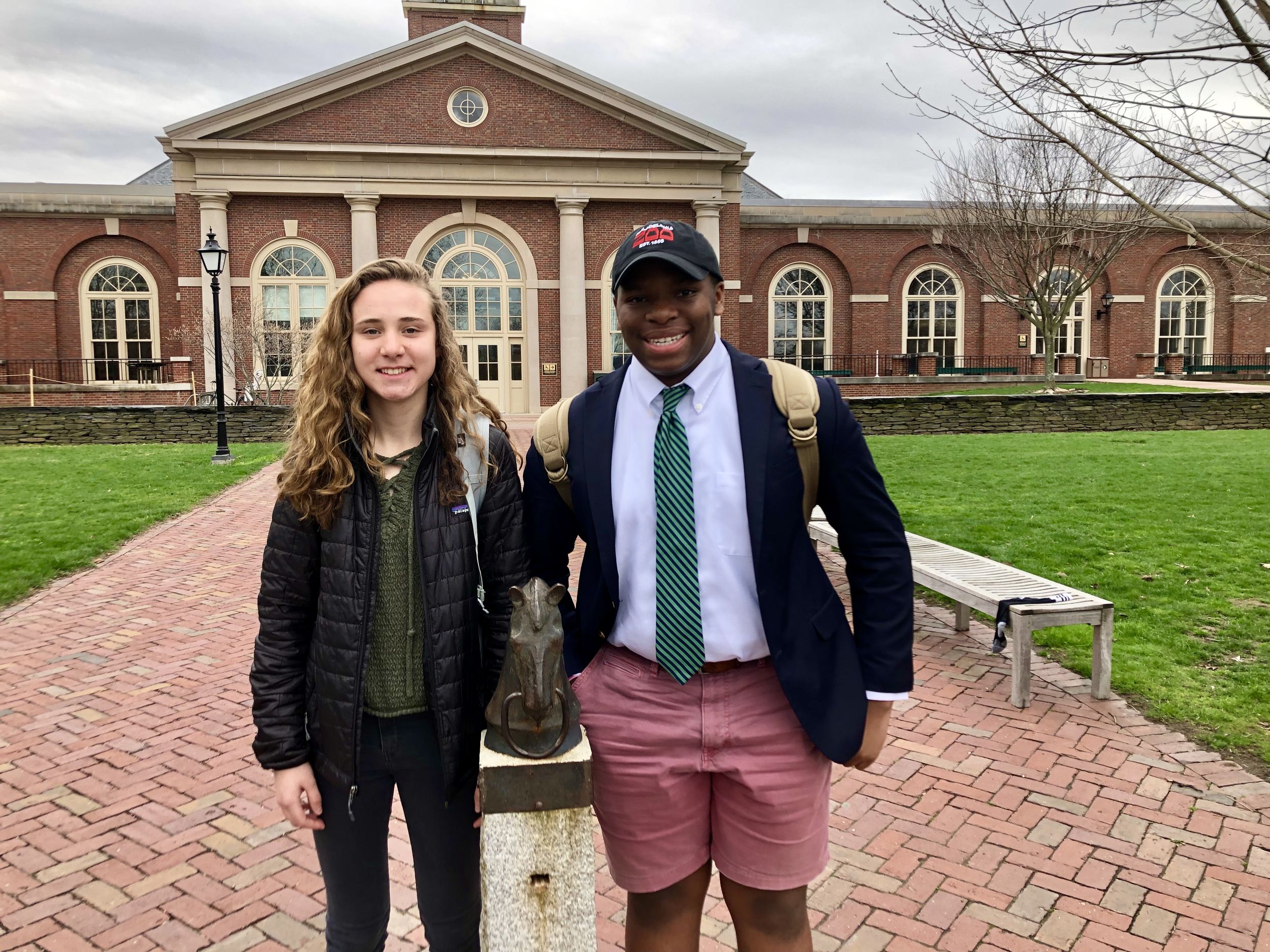 Bri has been extremely reliable in our defensive third in the past two games, leading the charge on defending in transition and fighting for ground balls. She uses her speed to catch up on fast breaks and slow down the opponent’s attack. She brings positive energy and good humor to practice every day. Thanks for your effort thus far, Bri!

Alton Machen: Alton won both hurdle events against Taft and Andover in dominating fashion, and picked up a 2nd place finish as the leadoff leg of the 4x400m relay and a 4th place finish in his first ever high jump competition.  Scoring in four events was an important tone-setting performance for this junior captain, helping lead his team to two big wins.

Ismay Anderson: In her first meet for Deerfield, Ismay competed in three events, taking 2nd in both and earning six valuable points for her team.  Ismay was runner-up in the 100m to her teammate, Sharon Kereke, and finished 2nd overall in the 200 coming out of the “slower” second section.  Ismay also ran a fast leg of the 4x100m relay team, which ran a competitive race but didn’t score due to an illegal handoff.  A great start for a ninth-grader with lots of races ahead of her!

This week’s AOTW for varsity baseball is Matt Gardner. Matt pitched 4 innings allowing 4 hits, 1 walk, and 1 earned run in a 10-1 win over MacDuffie this past Friday. Matt continues to impress on the mound. He has a several solid outings this year, but this was his best performance this year. We look for continued growth and success from Matt. Nice work!

The Boys JV Tennis athlete of the week is sophomore Oscar Depp ’21.  Oscar has been selected as one of the team’s co-captains, and he serves as a leader on the court at each practice with his enthusiasm to work hard and give his best effort.  This came through in a big way this past weekend as the team visited Taft.  After playing a strong #1 doubles set with his partner and brother Noah, winning 8-3, he moved into #3 singles competition with a persistent and consistent opponent.  Nothing in the first set was going well; Oscar’s shots sailed long or hit the net, and he fell behind 2-5, just one game away from losing the first set.  By this time, it was also clear how the other matches would play out.  Deerfield and Taft were knotted at 3-3.  The winner of this match would win the day.  Oscar rallied and lifted his game to a new level.  Suddenly he was flooded with renewed energy, and he was getting to every ball imaginable.  He rallied to win 5 straight games and take the first set 7-5, and he continued his dominance in the second set, winning 6-2.  Deerfield won the day 4-3, but more importantly, everyone learned the power of never giving up.  Until the final shot drops, there’s always a chance.

He is upbeat, hardworking and unstoppable.  At our tournament on Saturday, April 13, Tyler plucked disk after disk from high out of the air, out-jumping his opponents time and again.  He also maintained a competitive but friendly attitude over the course of the four tournament games.  Tyler was friendly and helpful both to our opponents and to the less experienced players on our team.  A model captain.​

Claire began this season with unmatched determination and positivity, and that attitude shines through not only in her rowing, but also in the way she encourages and supports her teammates. She pushes herself in every aspect of the sport, and is an inspiration in the way she comes to practice each day with an open mind and high expectations for herself. Claire is an extremely talented rower, but her grit and willingness to improve is what defines her as a member of the team. We’re so excited to watch Claire’s progress throughout the season!

With the team’s starting goalie injured twice in the season’s early weeks, senior tri-captain Amanda Brooks rose to the challenge of playing full games in front of the net.  Confident in their leader’s poise and preparation, the field players thrived, never once worried that Amanda would not be equal to the tasks of blocking shots and initiating the counterattack.

Luke had a tremendous game this past Saturday against rival Choate.  Luke won all 15 face-offs in the game, giving DA important extra possessions.  In addition, Luke has tallied two assists in the last two games.  He is not only winning the draws, but is also creating instant offense by winning the draws forward.  Luke has shown incredible grit and resilience at the face-off X this season.  Regardless of whether he wins the draw cleanly or not, Luke never gives up on the play.