Kikka Giudici ’20 is the JV soccer AOTW for her steady presence in the midfield as both an offensive and defensive threat against our game vs. Choate. She was always hustling back to support the defense, while leading the charge against the Choate defenders. She effortlessly dribbled through the boar defensive line and had a perfectly placed corner shot to complete her performance. This allowed the Doors to go up 1-0 in our Choate Day victory. Without her efforts, we would not have been successful! 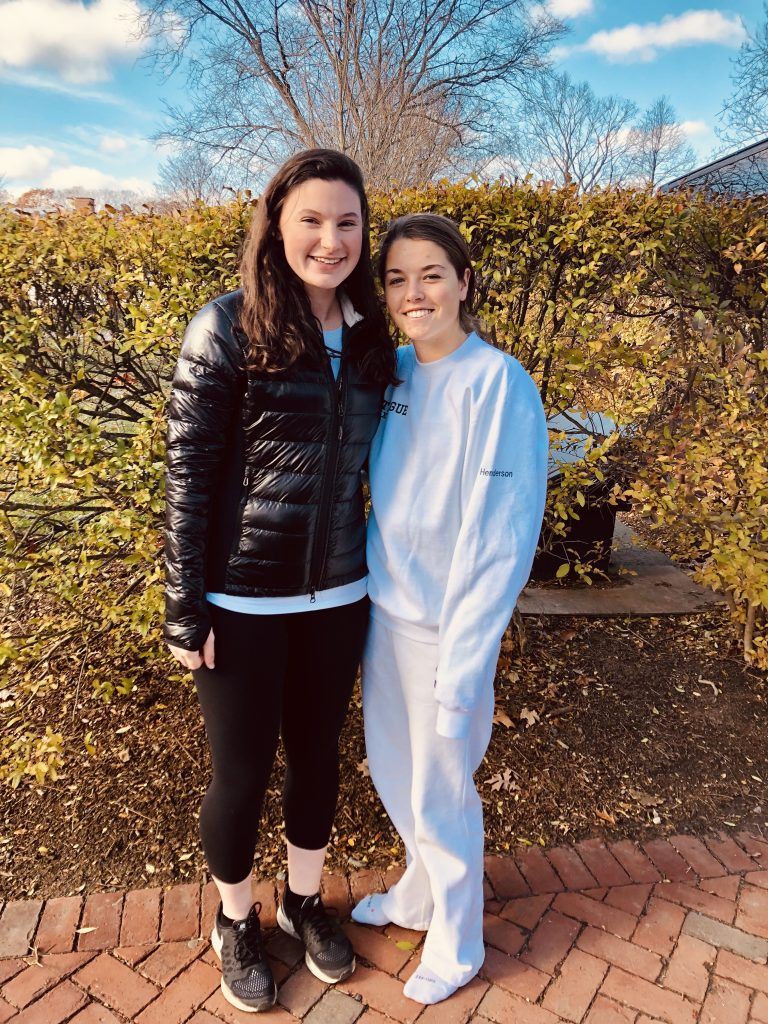 Hendo finished off a great season on Saturday in our win against Choate. She joined the varsity team as a junior last year and worked hard to earn a starting spot at right back this season. She has been a strong, reliable defender for us and has played exceptionally well all fall. One of the things we admire most about Hendo is her response to constructive criticism; she is eager to learn and improve and works hard to make changes to take her game to the next level. She is a pleasure to coach and we are so proud of her for her improvement and leadership this season.

Brigid has been a very positive member of the team for the past three years. She works hard in practice every single day and always has a smile on her face. She is incredibly supportive of her teammates and is fully committed to the success of the program. Brigid finished her regular season with a great game against Choate on Saturday. She is a great kid and we truly appreciate her efforts in her time with the program.

Ricardo Gonzalez: In his final race for Deerfield, Ricardo repeated his top-ten performance from last year’s New England Championships, earning a 10th place finish at this year’s championship race.  Ricardo defeated a number of runners who beat him earlier in the season, and came through for his team in his final opportunity.

Chris Thagard: Chris worked tirelessly all season to inspire his JV teammates and achieve his best results.  On the final day of the season, Chris ran his heart out and nearly collapsed as he crossed the finish line at New Englands, earning a big PR in the process and setting the tone for Deerfield’s XC team on the day.  He gave it his all for the Big Green. 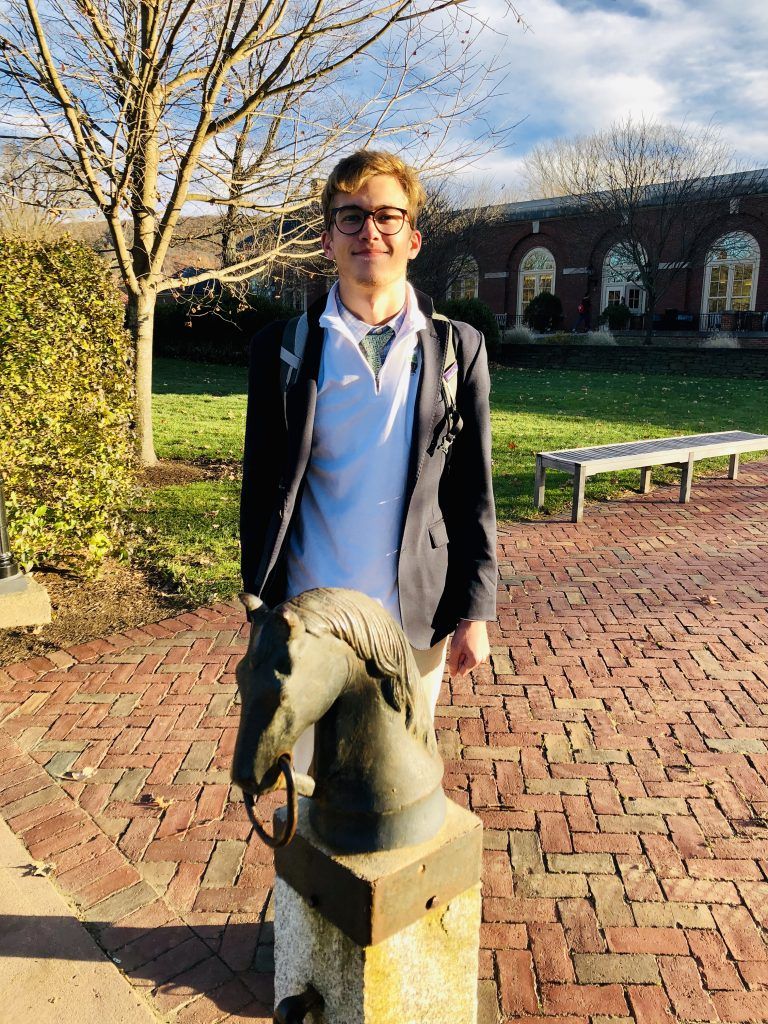 This fall the girls varsity soccer manager duo of Sydney Bluestein ’21 and Colin Olson ’19 were a great addition to our team! Sydney and Colin were always willing to lend a hand from moving goals, filming away games, live tweeting score updates during games, and warming up the goalkeepers. Colin even made some cameo appearances on the field and in goal when we needed an extra player at practice! Thank you, Sydney & Colin, for your positive energy, enthusiastic attitudes and passion for the girls varsity soccer team this fall!

Although the majority of their impact on this year’s team was not directly made on the field, the center back duo of Mae Emerson ’19 and Emma Visnapuu ’21 made a huge impact on their teammates and coaches this season. Both Mae and Emma were sidelined early in the season due to injury, but that did not stop them one bit from giving positive pep talks, holding their teammates accountable, to offering feedback and encouragement to their teammates. The maturity, selflessness, and dedication that both Mae and Emma displayed this fall was impressive and admirable. Every day they were disciplined with their rehab, setting great examples for their teammates and always came out to practice with smiles on their faces, ready to step in and help where they could. Many thanks, Mae & Emma for your contributions to the team this fall. The future is bright for these two!

For varsity volleyball, our AOTW is Kaelene Spang ’19. Joining the team this year, Kaelene has established herself as a great middle hitter and a wonderful teammate. Whether it was our match against Choate on Saturday or throughout the season, she has provided a strong block in the middle and an excellent offensive option. Congratulations!

Jasmine DeCossard is the Girls Reserve Soccer Athlete of the Week. With great enthusiasm and effort, Jasmine devoted herself this season to improving her soccer skills and to being a contributing teammate.  Jasmine’s newfound talents proved vital in the team’s final victory over Choate.  Jasmine’s speed on the field and strategic passing while on attack along with her terrific team spirit added tremendously to the team’s grand finale on Saturday.

Victoria Patterson completely dominated the cream of the crop of New England prep school cross country at the championship meet on Saturday, and in doing so outpaced second place by over a minute and smashed the course record by over two minutes! A season-long dominant force in races and team role model for focus, dedication, and support of her teammates’ efforts, Victoria is one of our co-Athletes of the Week for Girls Varsity Cross Country.

Within the first 400m of the championship race on Saturday, Grace Russell had her shoe clipped off, fell as a result of the contact, and was trampled by the runners behind her. In true bleed green fashion, Grace powered her shoe back on, raised herself up, and proceeded to pass 48 runners before the finish line. Because of her efforts, Deerfield edged out fifth place running powerhouse Noble and Greenough and was awarded a team plaque for fourth, and so Grace is deservedly our co-Athlete of the Week.

Isha Rao stepped up to a challenge on Saturday in the JV championship race. She hung with the lead pack as they crunched through wooded paths, popped over jutted roots, and plunged the depths of random puddles as she finished in eleventh place with a time that would have easily seated her on the top seven varsity of 13 of the 14 teams competing on Saturday. This tough-minded 9th grader was an all-out kid for us this season and will be a major part of our core depth moving forward. For all she did this fall and especially her bravery on Saturday, she is our co-Athlete of the Week.

Sarah Jung just doesn’t know how to quit. Her coaches begged her not to run in the championship race on Saturday because she was obviously in severe discomfort, but she boldly insisted, dismissing any pleas to pack up the season early. “OK”, we said, “but run 50% and just finish for the team.” She agreed, but privately, in her heart, she knew she would give 100% or collapse trying. Much to our amazement, Sarah ran one of her best races of the season and helped push the team to a top four finish. Because of her indefatigable spirit and sense of team-first, Sarah is our co-Athlete of the Week.

Freddy has shown tremendous improvement this year, which was illustrated in his play against Choate on Saturday.  Freddy made plays all over the field.  He won a ton of balls in the middle of the field and played great defense.  The one thing that stood out about Freddy was his positive energy all week.  Even when we were down on Saturday, Freddy remained positive and offered encouragement to his teammates until the final whistle blew.

The JV volleyball athlete of the week is junior Steph Martinez ’20.  Steph has been the team’s rock-solid setter all season.  Each week, the coaches added a new element to the mix, and Steph eagerly took to each added role.  For the final game against Choate, the coaches prepared her to be the only setter in the game, which required that she hustle and move about the court more than any player had previously been asked.  She excelled and even thrived under this added responsibility.  She played her best game of the year, taking charge, making great sets, and contributing strong defense.  On many plays, the team and coaches cheered her heroic efforts.  If only we had asked her to take on this advanced role earlier!  We congratulate her on a strong season.