Congratulations to this week’s Athletes of the Week! Keep up the good work!

“Smitty” showed great mental toughness this week: first against Choate, where he let a 2-0 lead slip away but decisively slammed the door in the fifth game, and then against Taft, where he closed out his match in a 17-15 overtime barnburner. In between, he pushed Coach Speer to five games in practice, a rare occurrence indeed! Smitty has won three matches in a row and his confidence is growing every day. We look forward to his continued veteran presence in the lineup.

The BV hockey team would like to nominate Chris Camelio ’18 as our athlete of the week. Chris stepped up his game big time over the last week and is working hard in all three zones. He is an enthusiastic participant in practices and scored a big goal in our victory on Friday night against Choate. He is playing hard and doing things the right way.

The Girls’ Varsity Basketball Athlete of the Week is senior captain, Megan Graves. Over the last week, Megan has contributed in a variety of ways, averaging 7.5 points, 3 assists and 2 steals per game. She was also a strong leader both on and off the floor. During a recent game in which Deerfield struggled on both ends of the court, Megan helped to pick up her teammates and led by example with gritty play for the entire game. Megan never backs down and we are lucky to have her leading our team this year!

Emily Stonestreet is our Athlete of the Week. She has become a leader at her end of the pool in practices. She’s stepped up to swim tough events in tough meets – a true team player!

The boys thirds basketball team would like to name Darrel Dartey for the Athlete of the Week honors. While Darrel was a leading scorer in our most recent victory, it is his defensive effort that made the big difference on Saturday. Darrel took on the assignment of shutting down their top scorer, a quality guard with a strong drive. Early in the game Darrel drew one charge and forced another as we went out to a commanding 17-2 lead. Darrel, along with his teammates, held the frustrated Eagle Hill opponent scoreless in the first half which allowed us to take control of the game. Darrel has been a standout also for his rebounding and strong offensive play. He has been playing “bigger than he is” as they say, regularly scoring and rebounding over bigger opponents. We look forward to seeing his continued improvement this season.

Emma Visnapuu is Girls Varsity Hockey’s AOW. Emma played her best game of the season against Choate, last Wednesday, skating hard, competing intensely against the boards, and making good decisions with the puck. She played with confidence, and we appreciated her intensity. Good work, Emma! 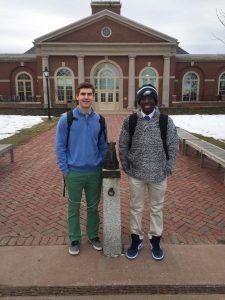 For his excellent performance in our dual meet against Choate and his commitment to making the most of every practice, John O’Loughlin is the Athlete of the Week for Boys Varsity Swimming & Diving. Although it is his first year on the team, John has already proven himself to be a dedicated and determined athlete on whom we can be rely. His 100 Free on Saturday was a thrilling race as he fought to the finish to touch out the swimmer next to him by .25 seconds and earn a season best time. John continued to impress by dropping almost a second in his 100 Back. His performance in the meets most certainly reflects his work ethic and willingness to challenge himself to even faster intervals and tougher workouts. This week we commend John for his tireless efforts in the name of the team!

Jackson Pitcher is our AOTW nominee. He had 12 points in a valiant losing effort against Andover.

Hannah Roche ’21 is the girls JV hockey athlete of the week. Hannah has a tremendous work ethic and positive attitude. She is always on time and works hard in each and every drill. In games, Hannah has been a force on our forward line, tallying several goals and assists and back-checking on every play. She is a pleasure to coach and we look forward to her strong skating and stellar play in the second half of the season.

Lucy Blake has done an outstanding job working hard in practice and is improving on a daily basis.  Her positive attitude and decision to eagerly say “yes” to every request sets an example for her teammates.  She recently moved up to lane one and is excited for the challenge.

Victoria Patterson is simultaneously training for both swimming and running.  She combines four hours of training in the pool, several sessions in the weight room, and 25-40 miles per week of running.  She is a dedicated athlete making waves in the pool and strides on the track.

First-year wrestler Seth Thayumanavan ’20 earned his initial varsity win in a close match against his Tilton opponent.  Down by several points at the start of the third period, Seth turned his foe twice, securing the six back points that allowed him to take and hold the lead in a bout he won 17-15.

Austin leads the team in hustle, positive attitude, and work ethic. Day in and day out he leads by example and his love for playing hockey is the engine that drives this train. He plays any position his coaches ask of him and he is the best teammate to all. A three-sport athlete who can play any role given to him. No ego, just grit and a team first attitude!

This week we recognize Sami Dulam as our athlete of the week. Sami is consistently one of the toughest players on the court. If the team needs a rebound (on the offensive or defensive end), Sami secures it. If the team needs a defensive stop, Sami is somewhere in the mix getting a ball touch to force a turnover from the other team. She gives 100% effort in every practice and game, and her constant optimism keeps our team motivated. Keep playing hard Sami!​