Congratulations to the final Athletes of the Week for the winter term! Thank you for all your great efforts this season!

Ted Durfee at the new England tournament upset the 2 seed in the third flight in the quarters and went on to finish third! Heroic effort!

Elliot finished strong with wins in the #7 spot against Andover and Williston; he finishes the season with a 10-3 record (including a 5-1 record in the top seven), and has improved tremendously since starting the season in the #10 position on the ladder.

After notching only a single win a year ago, Protik slugged his way to a 5-5 record this year – finishing with a decisive win in the #8 spot (a career high) against Williston.

The final boys varsity hockey athlete of the week award of 2017 goes to our two managers Sabrina Sotirhos ‘18 and Lily Davy ‘19. Sabrina and Lily went above and beyond the duties of the typical manager and have been instrumental in ensuring that all practice and game day preparations went smoothly. Thank you Sabrina and Lily for all you’ve done!

For the final Athlete of the Week nomination, we would like to recognize our five seniors: Lily Fauver, Felicia Renelus, Meg Targett, Ericka Ekhator and Sarah Du. These five seniors served as tremendous leaders both on and off the court over the course of the season and they will be truly missed next year!

Instead of naming just one athlete of the week, the GV Hockey coaching staff would like to honor all 23 of our athletes for their dedication and improvement over the course of the season. This was the most successful season in the program’s recent history, and every player deserves credit for this feat. This is an outstanding group of student-athletes, and they demonstrated how something special can happen when everyone works toward a common goal.

To wind up the season, the Girls Varsity Squash Team has two Athletes of the Week:  Cameron Munn and Ashley Manning.  A four year senior, Cameron finished her Deerfield squash career with a terrific, hard-fought win over her GA opponent in the finals of her division, racking up critical points for the team’s New England title.  In her first season wearing Deerfield green, Ashley climbed the ladder to the #1 spot on the team and faced some of the very best players in the New England Championships.  Beginning the tournament seeded 5th, Ashley ended up 2nd – an absolutely tremendous accomplishment. 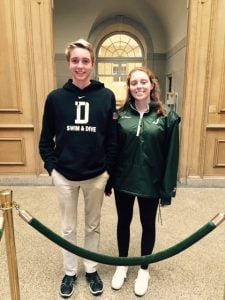 As we prepare for our big league championship meet at Hotchkiss this weekend, it is appropriate to recognize the contributions from these two sophomores who made quite an impact this season.  Shaun was often the team’s speed specialist, swimming our sprint events and garnering personal best times along the way.  Max, on the other hand, was our distance specialist breaking the 5 minute mark in the 500 freestyle this season and achieving the seventh fastest time in the league in that event this season.  This upcoming weekend Shaun will represent the Deerfield squad in the 50 freestyle and 100 backstroke, while Max will be swimming the 200 IM and 500 freestyle.  Both Shaun and Max are great teammates – always supporting their fellow swimmers.  We look forward to watching them continue their strong season at New England’s this weekend!

Madisen is the girls varsity swimming & diving Athlete of the Week for her constant positive attitude in the pool, even when the workouts get tough!