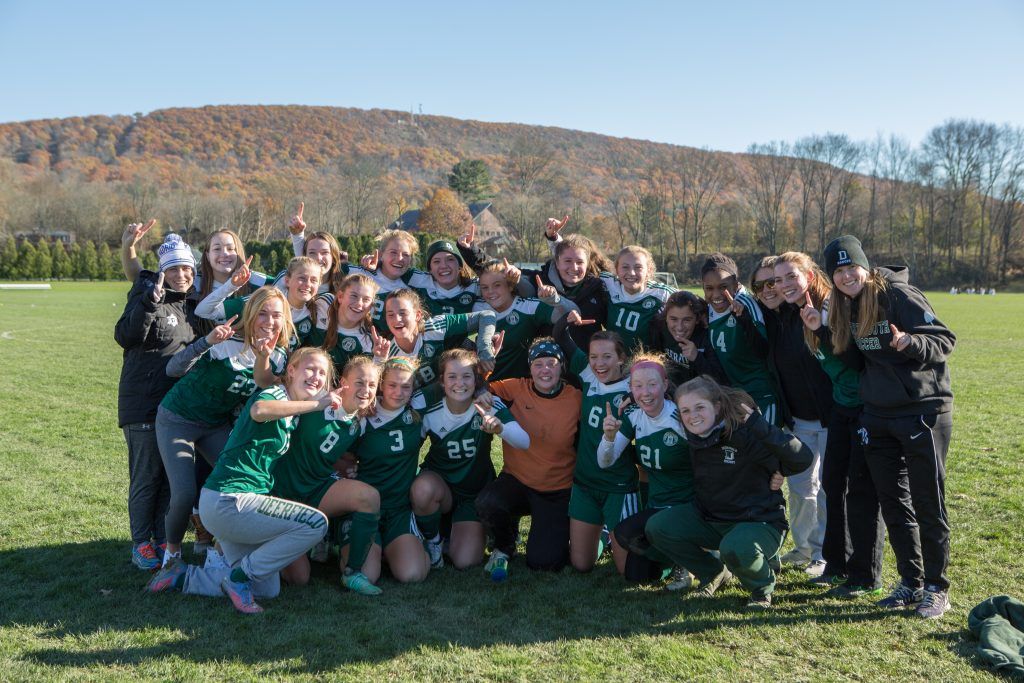 Saturday marked a monumental day for the Deerfield Girls Varsity Soccer team as they defeated Choate by a score of 4-3. Coming into Choate Day with only one win on the season from their previous game against Wilbraham, a win over 11-2-4 Choate seemed almost impossible for DA. This however, did not stop the team from putting in their best performance of the season. For the entire 80 minutes Deerfield was all over Choate, running through every ball, winning the fifty-fifties, taking on their opponents on the dribble and completing tick-tack passing patterns around the defense.

In the opening two minutes of the game, Choate was able to find the back of the net to take an early 1-0. Rather than get down on themselves, the Deerfield girls used this as motivation to work harder and play smarter. However, just twelve minutes later, Choate had a chance to extend their led to 2-0 as they were awarded a penalty kick after a Deerfield defender fouled a Choate forward inside the 18-yard box. This would have been the case if junior goalkeeper Valerie Hetherington ’19 hadn’t stepped up and made a diving save to keep the ball out of the net and the score within one. Feeding off this energy, the Deerfield offense was able to come up with a score of their own only two minutes later. Senior forward Brenna Hoar ’18 was able to get the equalizer off a blast from inside of the 18-yard box from a ball played by junior forward Margret Williams ’19 and sophomore midfielder Annie Kane ’20. This goal gave DA new life and more importantly hope to stay in the game.

Not even two minutes later, the Big Green were able to take the lead off a penalty kick of their own as junior midfielder Bailey Cheetham ’19 was tripped up in the 18-yard box. Having drew the foul, Cheetham stepped up to take the kick and buried it in the right side of the goal to give Deerfield at 2-1 led. The rest of the first half featured exceptional team defense from the Deerfield side. Junior goalkeeper Valerie Hetherington ’19 made numerous incredible saves including a beautiful kick save on a Choate break away to protect Deerfield’s lead. Thanks to the support of the fans, and a great half by Deerfield, the team went into halftime up 2-1.

Deerfield did not waste any time in the second half to extend their led. Just one minute, junior midfielder Sophie Opler ’19 took the ball wide down the left sideline and crossed the ball into the box finding teammate Brenna Hoar ’18 who onetime finished the ball into the corner of the net to make the score 3-1.

With 17 minutes left to play in the game, Choate answered back with a goal of their own off a free kick outside of the box on the right side of the field. The nice service bounced around in the box until a Choate forward put it in the net to bring the score to 3-2. Just a few minutes later, on an identical play, Brenna Hoar ’18 served the ball in from the right side of the box off a free kick and found junior Sophie Opler ’19 who headed the ball home for a score.

Choate, not giving up without a fight, was able to find the back of the net one final time with 7 minutes remaining in the game to make the score 4-3. In the final minutes, the Big Green stuck together, defending hard and playing the ball smartly to the corner. When the final whistle blew, Deerfield had prevailed in a high scoring 4-3 game.

It was truly the ultimate David and Goliath story! The win was made that much sweeter by the fact that the Deerfield Girls Soccer team had not beaten Choate in nine years with their last win coming in 2008 at Choate. It was an incredible atmosphere to play in and the team cannot thank family, friends, alumni and fellow students enough for cheering them on all the way until the end. The game ended with players and fans storming the field to congratulate the team and celebrate the big win. What an awesome way to end the season!

A special shout out goes two our two captains, Ali Dougal and Alli Norris, for all their hard work this season. Also, a big thank you to all of our seniors– Annie Ilsley, Megan Graves, Hannah Valencia and Brenna Hoar– for their senior leadership and dedication to the girls soccer program.