We are happy to announce that on August 15, 2015 we eloped off the coast of Long Island, NY!

When we set out late Saturday morning from Sag Harbor for a day cruise aboard Midnight Rambler, a stunning 70-foot Hinckley Sou’wester sailboat owned by our friends Andrew & Wendy Fentress, our families were blissfully unaware that our wedding would occur that day. There was a photographer and a producer on board because, everyone was told, they were tech scouting for an up-coming catalog shoot. About an hour into our sail, we sneaked below deck to change outfits before we set anchor for lunch off Shelter Island. That was when the “producer” announced that she was, in truth, the Rev. Dr. Janine H. Burns, an interfaith minister, and that everyone gathered was actually there to witness our marriage. Michael’s parents, Sue & Len, were the most visibly shocked, but we think everyone was quite surprised (except maybe Ben Butler, Michael’s brother-in-law, who thought something might be up, and expert-sailor Charley Cooper who was suspicious about a dress code for a day sail — what he didn’t know, however, was that he would be asked to serve as best man.)

The ceremony took place at the bow of the boat, and as part of it, the maid of honor, Demitri’s sister Stefanie Sgourakis, performed the traditional Greek custom of swapping “stéfanas” — crowns joined by a ribbon, which symbolize unity and signify that we have become “the kings of our newly created family,” which we will “rule with wisdom, justice, and integrity.” Michael’s nephew, Hamlin Butler, was our ring bearer and his niece, Clementine, our flower girl. Beautiful readings were given by Wendy, Stefanie, Charley and Michael’s sister, Laurel (class of 1994) — “cold reads” Wendy pointed out, as no one was given the readings in advance, of course.

After we exchanged vows and were pronounced “a married couple,” we raised glasses of champagne to toast our union and spent the afternoon swimming, sailing, eating, drinking, laughing and loving. It was a truly emotional, gratifying, and memorable day for us, and we are grateful for all the love and the support we enjoy from you.

—-
from The New York Times:

On August 15, 2015 Michael Langer Sucsy and Demitri Christian Sgourakis were married Saturday aboard the Midnight Rambler, a sailboat, off the coast of Montauk, N.Y. The Rev. Dr. Janine H. Burns, an interfaith chaplain who was ordained by Emerson Theological Institute, officiated.

Mr. Sucsy, 42, is a filmmaker in Los Angeles. He directed “The Vow,” which was released in 2012, and wrote, directed and produced the HBO film “Grey Gardens,” which was first shown in 2009. He graduated from Georgetown University and received a master’s of fine art in film from the Art Center College of Design in Pasadena, Calif. He is the son of Deanna Sue Sucsy and Leonard G. Sucsy of Hobe Sound, Fla.

Mr. Sgourakis, 51, owns an interior design company in Los Angeles. He graduated from the Fashion Institute of Technology in New York and is a Docent at the Getty Museum in Los Angeles. He is the son of Steven Sgourakis of North Brunswick, N.J., and the late Christel Sgourakis. 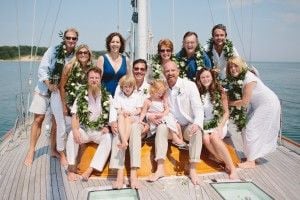 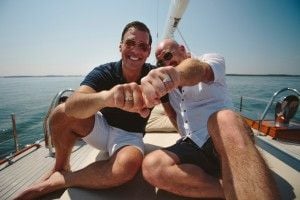 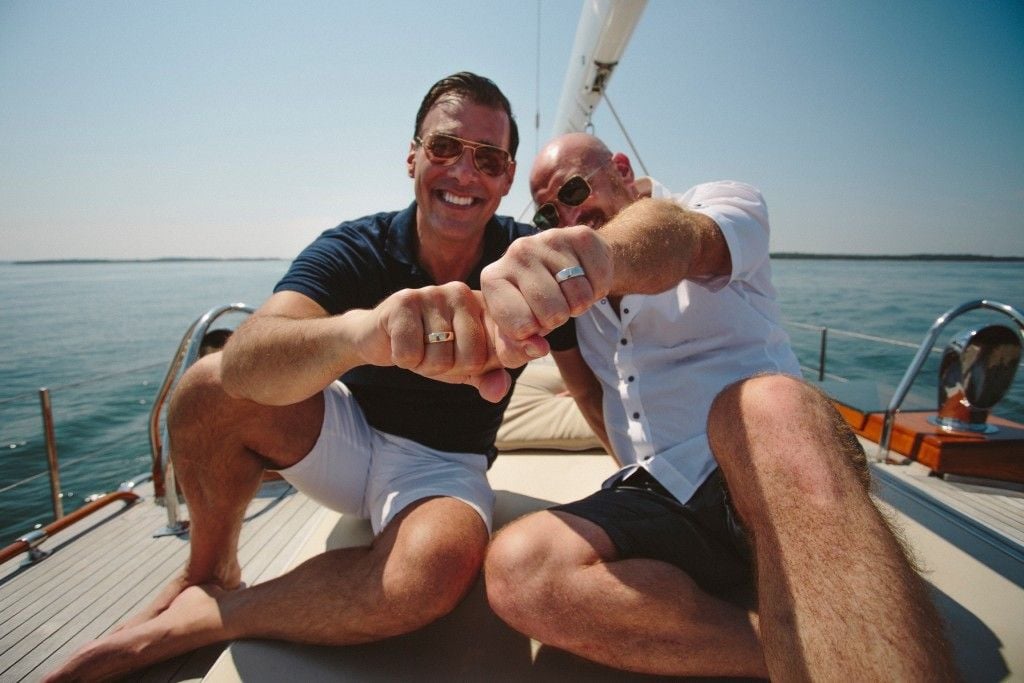