Edgar Parker is the July Volunteer of the Month.
PHOTO BY HALEY WEISGERBER
Posted Friday, July 2, 2021 5:59 pm
By Haley Weisgerber
When Arnold resident and Navy veteran Edgar Parker looks back on his life, he is proud of many things but especially his volunteer efforts.
Parker, who is originally from Massachusetts, graduated from the Naval Academy in 1956. He served until 1960 and settled down in Cape St. Claire in June of 1974 to be near the water and so his children could attend Severna Park High School.
In 1985, Parker began to represent his community at the Eastern District Community Relations Council. He was asked to volunteer as the recording secretary, where he took meeting minutes.
“Some people had a problem, some community members, and this was a good chance for them to come and actually talk to the district captain,” Parker said. “Then we kind of straightened it out or told them what they could and couldn’t do.”
He continued to volunteer for 15 years, but remains a member to this day, representing Woodfield Village off of College Parkway. After retiring from work in 1997, Parker continued his work with the county police by giving his time to the Volunteers in Police Service on Wednesday. For 20 years, Parker assisted in non-enforcement roles with the police department.
After being inspired by a neighbor who ran frequently, Parker joined the Annapolis Striders.
“I eventually got to where I could run 10 miles fairly comfortably,” Parker said. “I really do have a bureau full of T-shirts.”
When he could no longer run, he volunteered to assist with parking and managing the finish line at longer races.
From 2009 to 2018, Parker belonged to the Anne Arundel County Public Library Foundation. A self-proclaimed “reader,” Parker served a nine-year term where he attended meetings and library events, donated money and helped with fundraising efforts.
Parker was nominated for Volunteer of the Month by the Friends of Anne Arundel County Trails (FOAACT.) His involvement with the trail began when he lobbied to Councilman Cliff Roop and Wayne Gilchrist for a trail along College Parkway by Anne Arundel Community College.
“I thought you shouldn’t have to have a car to go to the community college,” Parker said. “You should be able to walk or ride a bicycle.”
His efforts were successful, and a study was launched to assess the area by College Parkway. Around the same time, he had learned that the Friends of the B&A Trail had changed its name and established the FOAACT. He reached out to get involved to continue working on the Broadneck Trail. He joined the board of directors and administered a boating safety course for 16 years. When the boating course was discontinued, he stayed involved as a representative of the Broadneck Trail and as a Trailblazer, a group of volunteers who monitor the trails and help people along the way. He continues to make monetary donations and is currently working to install a special water fountain along the trail.
After the first section of the Broadneck Trail was completed in 2012, Parker donated money to build a rest area by the Broadneck Library in memory of Allan and Edie Segree. He has also donated to build a large rest area by Jones Station Road and Peninsula Farm Road in memory of his wife, Jean, and himself.
In 2007, Parker lost his wife to Alzheimer’s. This inspired him to help run a monthly Alzheimer’s caregivers support group from 2009 to 2018 on top of his other volunteer efforts.
There is no question that Parker has made a substantial difference in this community. He said that he wants people to remember him for the good that he did.
“You have an obligation to help people,” Parker explained. “I like to help people, but I feel you have an obligation to help people.” 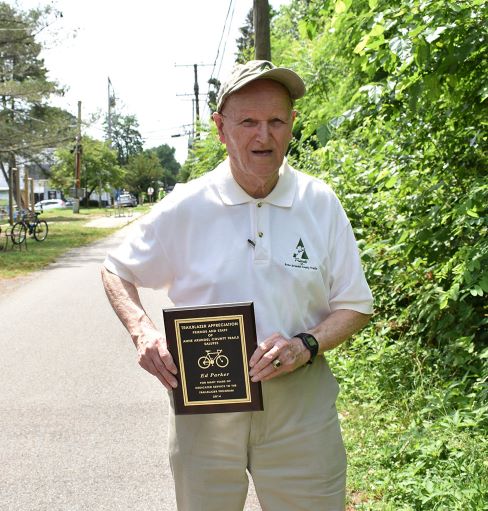