Bob Clapp was born July 20, 1929 (yep, he’s 89 years old) and grew up in Massachusetts. He attended Weston public schools, Deerfield Academy, and the University of Mass (Amherst), and concluded with a Master of Arts in Teaching from Harvard Graduate School of Education on the GI bill.

After his junior year in college, Bob joined the U.S. Marines from 1952 – 54. Following boot camp at Paris Island, he trained as an historian instead of studying electronics. Bob became a sergeant, went to Korea and Japan on an aircraft carrier and supervised guys fixing aircraft radios. That’s where he learned to cut hair, and has trimmed his own ever since.

Bob originally thought that he would be a Unitarian minister, but changed his mind and pursued landscape architecture. An offer to teach brought him to Virginia Beach. The schools in Norfolk were being closed to avoid desegregating, but he took a teaching offer at Little Creek elementary 6th grade. Next he became Director of the Therapy Dept. at A.R.E. where massage is a prominent offering. He became a certified Massage Therapist. Bob started his own “Massage from Bob” where he’s worked for past 31 years. His patients testify about how helpful his massages have been. Bob does massages because he likes seeing how satisfied his clients are.

Soon after arriving in Virginia Beach, Bob met Ann in a parking lot at A.R.E.. Ann was a music teacher and taught piano. They dated about 4 years before marrying. The wedding was in our Meeting House. Ann died in 2016. Bob and Ann had two children – Gwen and Linda.

Bob’s mother had a biography of Edgar Cayce (There is a River) that he read as a student. It inspired Bob in oriental religions and metaphysics. Reincarnation and learning about “near death” experiences are important to him.

He and Ann started the Virginia Beach folk dancing club at the A.R.E. and went to summer dance camps all over the east coast.

Bob took organ lessons as a kid, and sang in the Unitarian church choir (all males). Bob always loved classical music. His mother got him season tickets to the Boston Symphony, which he loved. He is also an opera buff. Bob did volunteer work as an usher at Virginia Symphony Orchestra concerts at Chrysler Hall and now is a frequent attender at Symphonicity concerts in Virginia Beach.

Soon after moving to Virginia Beach, Bob began meeting with Bob and Louise Wilson at their home before our Meeting House was constructed. He has always been active in our Meeting, serving on various committees including Building and grounds and F&P revision. He’s been a trustee, elder and overseer, and even the Clerk briefly. Now Bob likes to help out with whatever is needed instead of being assigned to a committee. You’ll often find him in the kitchen helping clean up after meetings.

Simplicity is one of Bob’s testimonies; he has lived in his same house for over 50 years. Bob likes the queries – especially the one about overindulgence in tobacco or alcohol. Another testimony Bob approves of is “Speaking truth to power or people who need to hear it.” Bob was part of the Meeting when they decided to establish Friendship Village – a new residence area for (mostly poor black) people displaced during the construction of the Virginia Beach convention center. He helped establish the Village, was a cheerleader for the project, and helped find funding. The Funeral Consumer Alliance of Tidewater is another important testimony; Bob is treasurer, and has been involved for many years. Bob has also a keen interest in Native American causes, and keeps track of several tribes. Another more recent testimony is “Feeding America”. This group is able to provide large amounts of food to places that feed the hungry people among us, and donations to Feeding America provide vastly more food than if we individually bought it ourselves. Bob has organized publicity and donations at Meeting each year recently. When Bob moved here he was shocked to find segregation practices, and worked to help end them by doing some door-to-door canvassing.

I asked Bob what is his least favorite chores – he said he doesn’t mind doing chores, but the flood of mail is annoying. After looking the “junk mail” over, it becomes a starter for his wood stove. Bob likes cooking, and tries to use organic foods, avoids sugar, and otherwise eats healthfully.

If you could spend some time with Bob you would learn a lot more than this brief summary – he’s a wealth of local history and overflows with good will and generosity. 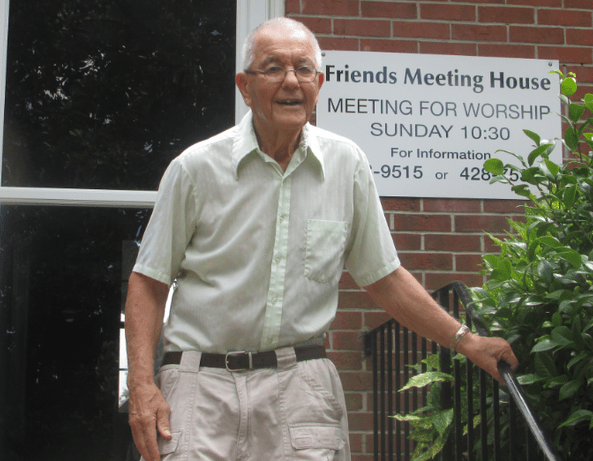