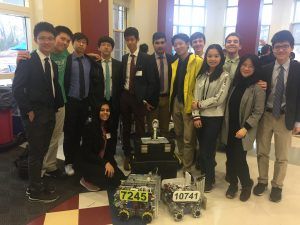 DA’s Big Green Robotics Team and our novice Boyden’s Bots team travelled to Natick, MA on Sunday to compete for a chance to advance to the Massachusetts State Championship event. Big Green won four of its five events in the round robin tournament coming in fifth out of 23 teams, and became was one of the four teams to head an alliance in the elimination round. They won, by vote of the judges, the Collins Aerospace Innovate Award, which is awarded to the team that “thinks outside the box and has the ingenuity, creativity and inventiveness to make their designs come to life.” The novice team Boyden’s Bots also competed earning valuable experience at its first ever FTC robotics competition.