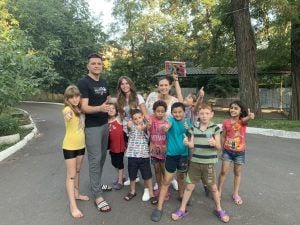 The next time I came back to the Children’s Shelter, I not only brought some furniture, books, games, and posters but also a group of volunteers willing to give their time and attention to the kids.

We divided kids into groups and set out for our quest to engage children in a new activity. First group captured bugs and used microscopes to learn more about the inhabitants of the garden. Not only kids became more curious about the new biology books, they also learnt to be gentle with all alive organisms.

The second group spent their time around a new map on the wall learning about geography, travels, and languages. Finding out the kids’ struggles to identify Ukraine, I made it my priority to make geography as entertaining and educational as possible. We put our map on the floor and walked on it, pretending to fly from one country to another, learning the locations of famous cities and sights.

The third group focused on languages and gathered around the games that involved proper grammar and vocabulary. They put their thoughts on paper, and voiced them in front of an audience of children and teachers. Initially coming to teach English, I changed the focus to all the subjects, including Russian and Ukrainian as the ten-year olds struggled to write their name; they would write it with someone’s help on their hands in the morning and then copy it on paper in case they needed it throughout the day.

The last group was created to have fun; we played Twister with the young ones, learning to interact with each other without violence, and Monopoly with the teens, who learned to manage money.

The groups rotated experiencing different “classes” and had fun learning the benefits of interactive education. We’ve been coming to the shelter during August, seeing some kids leave, transfer or run away–but we taught them to pass on the things they learned to the incoming students, who needed love and attention as much as they needed friends.

I want to thank the Workman Family and Deerfield Academy for such an amazing opportunity to bring a change to the lives of the kids in the shelter. I believe that the project will have a long-term impact on the future of these children because education, attention, and love have a great power when combined.