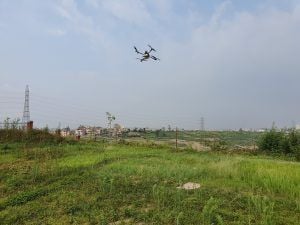 While the drone was complete, yesterday’s flight test showed that there were still errors that caused the drone’s throttle to act abnormally. In order to fix this problem, I checked every part of the drone. All the wires were plugged in correctly, there were no physical damage to the drone, and everything seemed to be fine. However, just in case anything was wrong, I disassembled several parts of the drone and put them back together after carefully inspecting each part. I checked the propellers: nothing wrong there. I recalibrated the GPS, the accelerometer, and the gyroscope: nothing wrong here either. So, in hopes that the problem had been a power issue, I checked all the wires again, switched out the power regulator, and went out for another test flight.

Since I was still unfamiliar with the Toshiba RC controller, Mr. Karki flew the drone. This was the result of the test flight:

So, the problem wasn’t in the components of the drone. Therefore, I examined all the settings in the flight controller program, altering some variables to fit the drone’s design. With that I headed back to the field.

The problem wasn’t the flight controller either. So, what else could there be? I began reading through all the manuals for the individual parts, and after a few hours of struggling to pinpoint the problem, I found something that might have potentially resulted in this problem: ESC threshold calibration. This calibration wasn’t done through the flight controller system, so I hadn’t recalibrated it when I checked in previous tests. Instead, I had to disconnect all the motors from the flight controller, connect them to a separate power supply, then follow the manual to reset their threshold values.

Here is the result:

It worked!! The motor calibration had been the problem. Finally, after spending the entire day looking through manuals and being frustrated at not being able to figure out what was wrong, the drone was hovering. One of the propellers was not completely level, making the drone tilt to one side while hovering. I fixed the problem, and flew it again:

Here is a compilation video of successful flights: