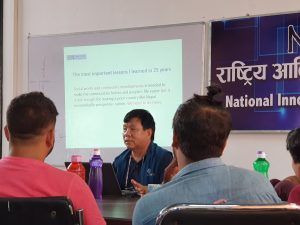 Arriving at NIC in the morning, we saw a few researchers testing the fixed-wing UAVs. Because they didn’t have any flat land to work on, they stood on top of a hill and launched the airplane by holding onto the bottom of the plane and throwing it like a baseball. I wanted to join them, but there was work to be done today, so I only watched for a short moment.

Today’s work was identical to yesterday’s. I was to make four of the drone plates, and since I had only made one yesterday, I had to make three more. The carbon fiber itch had become more severe than yesterday, so I bought a pair of working glove on the way and wore a thin long-sleeve jacket that I had brought.

The fans had to be turned off because we didn’t want to inhale the carbon fiber powder more than we already were, so the still air was suffocating. I could feel sweat pouring down my back as I worked, but luckily, one of the workers had a handheld fan that he offered to lend, so I gratefully accepted. Dr. Pun came to check on my progress while I was filing, and he encouraged me, telling me that I was doing incredibly well in the hot weather.

After another three hours of filing, I was done with my second plate. The first and second plate fit perfectly with each other, although both plates were the “top” plate on the drone. I still had two plates to file, both the “bottom” plates.

However, my work was cut short that day due to some visitors at NIC. A Tibetan innovation group similar to NIC was visiting that day to explore the work NIC was doing, as well as to show what they were doing. As a result, Dr. Pun showed a PowerPoint of all the work he had done so far, as well as some advice. Here is a summary:

– Social works and community developments are needed to make the communities better and people’s life easier, but it is not enough for making a poor country like Nepal economically prosperous nation. We need to do more.

– Nepal never had and still does not have culture of innovation