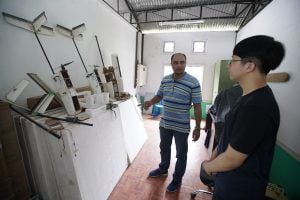 Waking up for my first full day in Nepal, I left the hotel with plenty of time to spare and headed for Tribhuvan University, where National Innovation Center’s workshop is located.

Arriving at the NIC building, we were greeted by Mr. Suraj Karki, the chief engineer of NIC. As Dr. Pun was still on his way back from a conference in the Philippines, Mr. Karki offered to show us around the workshop. Inside the large building were several rooms for individual research groups, a large maker-space, and an open space with a conference room. The workshop had an industry laser-cutter, two 3D printers, and a small CNC router. While there were open windows on all sides of the building, no air circulated from outside, creating visible clouds of dust. However, the hot summer air was mitigated by ceiling fans that spun in sync in all the rooms.

Mr. Karki then showed us the UAVs they were working on. Their quadcopter prototype was able to fly, but due to software issues, it had crashed earlier this year and had not flown since. The octocopter was complete, but weight of the drone was too great for flight. The fixed-wings had made the farthest progress, with several working prototypes, but due to the lack of a runway or a VTOL mechanism, the fixed-wings were getting severely damaged only after a few test flights.

After the tour, Mr. Karki went over the biggest issues for NIC. Some were engineering issues, such as the condensation of water on electronics at high altitudes, but there were also a lot of issues that he could not control, such as NIC students taking leaves to go study abroad.

Recently, the drone engineers at NIC had come up with several designs to exceed the current physical limitations of drones at high altitudes. My job at the NIC was to prototype one of these drone designs and to test it to see it if is adequate for deployment in real life. As we were discussing a more detailed plan for the week, Dr. Pun arrived. We sat down at a table in the workshop to catch up on various events that had happened since we talked last year, then I presented the drone parts that NIC had requested. Mr. Karki had previously mentioned that due to Nepal’s unique online payment system, they are unable to purchase parts from the United States, leaving them no choice but to rely on unreliable parts from India and China. Rarely, they would have an individual like me who would bring them various parts from the US, Korea, or Japan, and he expressed his gratitude for the drone parts that I had brought today.

After a quick introduction with all the other engineers and researchers working at NIC, it was time to build the quadcopter. The previous design that NIC had made could fly in Nepal’s sparse atmosphere, but the motors were prone to overheating which drastically increased drone weight due to condensation. The design of the drone I was working on had several modifications, and if it turns out to be a functional quadcopter, NIC could then produce drones that transport small payloads, especially medical supplies, to nearby mountainside villages at times of need.

The first step to building a quadcopter is to have a frame. To be honest, when Mr. Karki first told me that I was building a quadcopter, I was thinking of assembling a drone from commercial parts. However, I was to make a drone from mostly raw materials. Mr. Karki taught me how to use the CNC router, and I watched the drill slowly etch across the surface of the carbon fiber sheet wondering if this was really necessary. When I voiced my thoughts to Mr. Karki, he nodded understandingly. I know that making a drone from scratch is a lot of work, but we cannot completely rely on parts or technologies from other countries. What’s important is that we try to make as many parts of the drones as possible with tools and materials that we have here to that the technology can be our own. Hearing those words, I was surprised and impressed at how NIC was working to develop their own innovative products and to be an independent institution.

My work began when the CNC router had finished its work. Since the router wasn’t powerful enough to cut through carbon fiber cleanly, the cut plate still had jagged edges and splinters all around the edges. So, using a file and a snipper, I went to work, filing the edges of the carbon fiber plate until it was smooth.

Surprisingly, the process of filing an entire carbon fiber plate took me 4 hours, with microscopic carbon fiber splinters getting all over my arms and hands. I was amazed that this was the way they had made all their previous drones, and could appreciate the effort that was put into all the making.