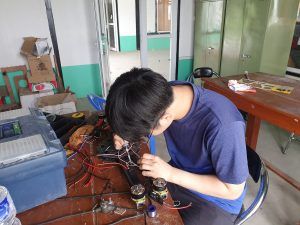 Before assembling the electronics components of the drone, Mr. Karki introduced me to the flight controller they were using. It was a relatively old model of Toshiba’s RC flight controllers, although I wasn’t sure if they were actual Toshiba controllers or knock-off versions. I wasn’t acquainted with this particular controller, after Mr. Karki explained each control, I spent some time practicing.

With the motors secured in place, it was time to connect all the electronics. The solder NIC was using didn’t have a long cord, so we used an extension cable to reach a plug on the wall. However, the extension cable didn’t have an end that could plug into the wall, so Mr. Karki simply cut the wires, stripped the ends, and plugged the wires straight into the socket. I was a bit uncomfortable using the extension cable, but thankfully, it didn’t cause any trouble.

First off, I had to solder the ESCs. While the ESCs connected to the motors using standard plugs, the wires were too short to reach all the way to the center of the drone, where the flight controller and power distribution board would be located. I cut spare wires into adequate lengths, then soldered them onto the ESCs.

For the drone’s power distribution board, we used an acrylic plate coated with copper. After using an acrylic knife to cut the plate into a small square, I used a regular knife to etch the middle of the copper square, carving away the copper just in the middle. Then, I soldered all the positive cables on one side of the plate and the negative cables on the other side of the plate. Finally, I soldered a power regulator (BEC) onto the board.

Unfortunately, before we could connect the flight controllers and the rest of the parts, the electricity cut out in the entire neighborhood, so we were forced to end the work for the day.