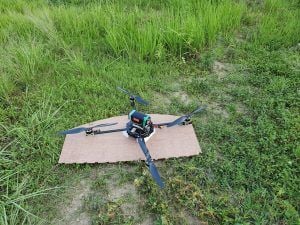 Because of the power outage yesterday, I couldn’t finish soldering everything we needed. Since the power regulator’s wire connecting to the battery was too short, I made a long enough DIY connector that soldered directly onto the power regulator. The rest of the parts were all plug-type connections, so we put the soldering iron away.

With power connected, we were now able to calibrate the ESCs. Since I had never worked with these ESCs before, Mr. Karki tested each ESC to determine the power threshold, then adjusted each one to be in sync.

The next step was to create a battery holder as well as a holder for the flight controller. In order to do this, Mr. Karki used the CNC milling machine to cut a long rectangular piece of carbon fiber, telling me that it was the last time I would need to file carbon fiber plates. The rectangular piece connected to the top of the drone using nails and screws as spacers. While the nails were heavy and not entirely necessary, there weren’t any decent substitute. The LiPo battery was tied on top of the plate using velcro, and the flight controller was placed in between the plate and the drone using double-sided tape.

With the flight controller and the GPS reattached, the drone was theoretically ready to fly.

This is how our first test flight went:

As you can see, the drone couldn’t control its rotor speeds properly. Instead of sending an analog signal to the motors, the ESC sent near-digital signals to the motors, causing the motors to be either on or off. The drone was fortunately safe after its crash landing, with none of the components broken. I had stuck some foam on the bottom of the drone beforehand to use as landing legs, which helped when landing.

While I didn’t have enough time to pinpoint the problem on the drone today, I will be back tomorrow to try to fix the problem!