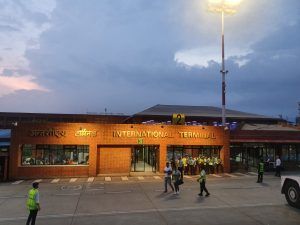 As a country placed directly in between the Indian tectonic plate and the Eurasian tectonic plate, Nepal is constantly plagued by earthquakes, with the last major earthquake in 2015 causing nearly 9,000 deaths and 22,000 injuries (World Vision). As much as these earthquakes are disastrous, the lack of quick first response in the aftermath of an earthquake often doubles or even triples the casualties. Since many villages outside of Kathmandu, the capital of Nepal, tend to be spread out in mountainous terrains, earthquakes are particularly destructive, causing landslides that block roadways and passages and making first aid extremely challenging. Drones and UAVs can be used as a solution to this problem, as they do not rely on transportation on the ground. Therefore, they can easily locate and transport supplies in the aftermath of an earthquake.

Last summer, I visited Nepal to teach elementary and middle school students basic drone engineering using open-source platforms. With a generous grant from Deerfield Academy’s CSGC office, students from multiple schools in Kathmandu, Bhumimata, and Adashi were able to build their own microdrones and practice flying them. In addition, I provided small commercial drones to the schools through ADRF-Nepal, a non-governmental organization, so students could practice and study for Nepal’s official drone flight license, which can help with future employment in tech fields. Lastly, I donated a DJI Spark to the village of Bhumimata, more specifically to the family of Tamang, who leads the village, for use in surveying mountain pathways that have been destroyed in the 2015 earthquake.The full documentation of the trip can be found here: Part 1, Part 2, and Part 3.

This year, as I wanted to continue my work in Nepal, I applied for and received a generous second grant from the CSGC office. While my original plan had been to expand my classes to other schools in Kathmandu, Bhumimata, and Pohkara, but Dr. Mahabir Pun, whom I had met last year in Nepal, offered an alternative plan.

Dr. Mahabir Pun is the head of National Innovation Center (NIC), one of Nepal’s biggest research facilities. NIC is a makerspace and workshop for all students and researchers in Nepal, especially for those studying at Tribhuvan University, the largest university in Nepal. I met Dr. Pun last year while teaching drone engineering classes in Nepal, and he had invited me to visit his workshop in Kathmandu. One of NIC’s ongoing projects was building a “medicopter,” a drone used to transport medical supplies in rural areas in times of need, especially after an earthquake. Researchers at NIC were researching various multi-rotor designs and fixed-wing designs, but have had many issues with Nepal’s naturally thin atmosphere, which is due to its high altitude. Even after I returned from Nepal, I kept in touch with Dr. Pun and his chief engineer, Mr. Suraj Karki, about the progress of their drone.

Just a few weeks ago, Dr. Pun contacted me to let me know that there was a research opportunity with NIC. They had recently developed several new designs for the drones that could decrease the effect of early condensation on drone propellers at high altitudes, and because three of their drone researchers had left to study in Germany, they needed more researchers with NIC. Although I would only be able to help out for about a week, I gratefully accepted the offer, and within a month, I was off on a plane to Nepal.