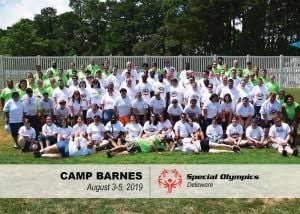 This year’s Camp Barnes hosted by Special Olympics Delaware (SODE) was a fun and exciting one! Our athletes arrived around 11 am on August 3rd, and we kicked off the camp with Camp Olympic— a light hearted event at the camp where two cabins (one girl cabin and one boy cabin) are combined to make a team. The eight cabins at the camp yielded four teams: blue, yellow, red, and green. The Delaware Interscholastic Athletic Association (DIAA), a group of Delaware’s best high school student athletes, came to Camp Barnes and participated in the Camp Olympics with us. With the CSGC grant, I provided some of the materials for the Camp Olympics like t shirts, water bottles, markers, paint (to decorate the water bottles the athletes were given), and hair spray of the colors of the teams (to bring some fun spirit into the event). And prior to the Camp Olympics starting, I spoke to the DIAA about my involvement with Special Olympics in hopes to encourage more volunteering for the organization.

Later that night, we had our “Movie Under the Stars,” where we watched Central Intelligence on a projector, out on the basketball court. For this event, I was able to purchase a projector and other equipment needed to show the movie, and the popcorn for everyone to snack on during the movie. It was a nice way to end the first day of camp and prepare for the next day, which was filled with different activities.

Th final major event my grant played a part in was the Lei dance we have the night before camp ends. Everyone gets dressed up in a spirited Hawaiian theme with leis everywhere. For this dance, I provided the leis and the DJ who played music throughout the entire two hours that the dance lasted for. It was during this dance when the DJ gave Deerfield Academy and me a shoutout for making the dance possible, which was a wonderful feeling. It was a lively way to end the camp.

My third time volunteering for this camp holds a special place in my heart because of my involvement with purchasing things to maximize the fun for our athletes. But it was much more than just providing the athletes with things they need. I stayed overnight with them in their cabins, help them get their meds everyday, and took care of them for three days and two nights. It was sad to say goodbye to all the athletes when August 5th came, but I know I will see them all again next year at the same place. Without the help of the Workman family and the CSGC, this could not have been possible. Many thanks again!