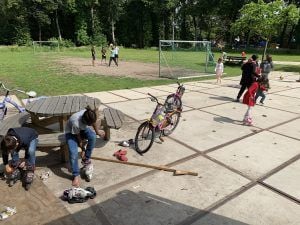 Over the course of this summer, I will regularly visit a local center for new immigrants in Amersfoort, the Netherlands. These last few weeks, specifically, I have organized events for the children (approximately 5-12 years old) that live at this center.

I began with a simple game of soccer, which always proves to have the power to bring people together from many backgrounds. Even though children are confined to the boundaries of the center for the majority of their time, there still reigns a social tension between the different nationalities, age groups and genders. As soon as the ball was in play, however, these differences seemed to melt away in the heatwave that grips Europe. Instead, only bright smiles and sweat drops appeared on the faces of these young children.

As I continued to look around, a modest smile also appeared on my face as I truly realized how sports can positively impact these children. As a result, I decided to continue to organize soccer games in addition to other events like rollerblading and riding bicycles. This way, I have set my first big steps of my project by exercising and simultaneously assimilating with each other.

With special gratitude to the Workman family, this year’s CSGC grant will help me purchase new equipment for these children to continue to play many sports together.