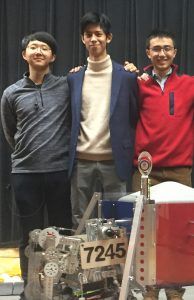 Deerfield’s robotics team, Big Green, went to the FTC state championship on Saturday, March 2 to compete against 34 other teams. The robot, desined and driven by Will Song, Elven Shum, and Neil Nie, competed in five matches, each time paired with another alliance team against another pair of robots. The robot performed with speed and reliability, each time accomplishing the set of tasks for which it was designed. Its consistency led to the team earning the fourth most points among all robots. Their team pairings won the first three matches and lost the last two, good enough overall to get them to eighth place over all. This is Deerfield’s highest finish in its robotics history.