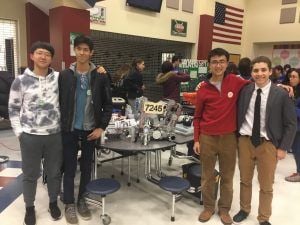 Two Deerfield teams travelled to Natick, Massachusetts today and competed in a qualifying tournament for the right to advance to the next level. The upperclass team, Big Green, of Neil Nie, Elven Shum, and Will Song, built a robot that endured some on the spot repairs, including a broken cable, but finished seventh overall. Their performance was enough to advance them to the elimination round. The won a best of three semifinal round to enter the bout of the final two alliances. In a narrowly contested match their alliance (team-up with another school) lost earning a second place overall finish.

For the underclass team, Boyden’s Bots, this was their first competition. Rosnel Leyva-Cortes represented the team and was driver, programmer, and engineer for the day. Their robots earned a very respectable finish of 15th place out of 25 teams.

The teams will compete again on February 9th in Hadley.