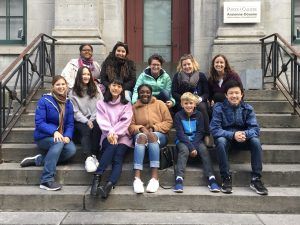 On Saturday, a group of eight students and four adult chaperones made our way to the First Nations reserve of Kahnawake. Sunday was spent in downtown Montreal, Quebec, Canada, where the group went to the McCord Museum and later in the day had dinner with the Montour family. Jordan Montour, Deerfield class of 2012, comes from the Kahnawake reserve and has promised to return and serve Kahnawake. On Monday, the group made their way to the Kahnawake reserve. During the time spent there, the group learned about how the reserve is working toward preserving their identity and tried some Kahnawake cuisine. The Kahnawake reserve puts an emphasis on the notion that we are all one people. Although Kahnawake exercises a matriarchal system, women are respected rather than honored, as honored implies a hierarchy, and in Kahnawake, everyone is on equal standing. The group made their way back to Deerfield Monday afternoon with a better understanding of what the Kahnawake reserve came to be after the Deerfield Raid of 1704.